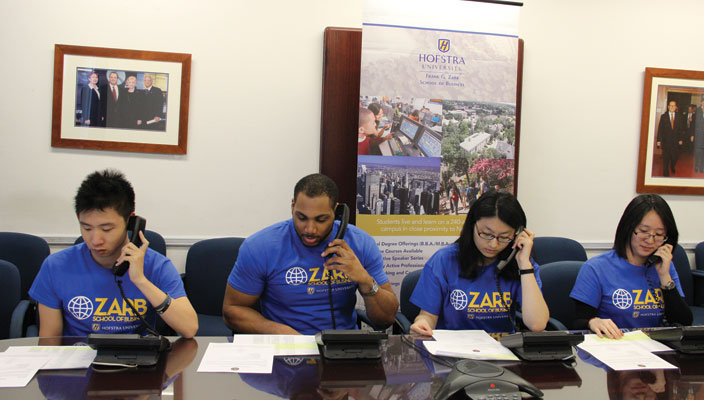 In the aftermath of Superstorm Sandy, the Hofstra community came together in efforts designed not only to help the campus community, but also to assist those in neighboring towns and cities hard hit by the storm.  Hofstra faculty, staff and students assisted efforts in Long Beach, Freeport, the Rockaways, Island Park and Staten Island by running supply, food, book and blood drives.

The weekend after Superstorm Sandy, more than 200 students went into the communities that surround Hofstra University to help with the cleanup. The student volunteers worked on homeowners’ properties, rid areas of debris, and distributed food and water to people who were in need. The students also delivered care packages to elderly residents who didn’t have heat in their homes. The relief effort was led by two compassionate students, Ji Yeon Hyun and Tabatha Flores, with the help of Anita Ellis ’88, ’90, director of the Office of Off-Campus Living and Commuting Student Services.

On November 9, administrators and students took a Hofstra bus filled with relief supplies took to Long Beach. Efforts to collect supplies continued throughout the month.

In addition to the weekend cleanup, several donation centers were set up across campus to collect, organize and label goods being donated. On November 9, a Hofstra bus filled with relief supplies took administrators and students to Long Beach. Efforts to collect supplies continued throughout the month.

A blood drive with Long Island Blood Services, originally scheduled for October 30 and canceled because of the storm, was rescheduled to November 7. Approximately 375 donors registered and more than 350 pints of blood were collected. The Hofstra community worked together to encourage people to donate blood in response to the great need in New York and on Long Island after the storm.

Frank G. Zarb School of Business students volunteered to be part of the Nassau County Economic Recovery Task Force, an initiative aimed at the micro- and macroeconomic issues resulting from the storm. Zarb students contacted numerous local businesses to inform them of important resources available to assist in their recovery. “It was such a gratifying experience to speak to local businesses and feel like we helped make a difference in their lives,” said Steven Medard, a Zarb student majoring in finance and marketing.

Hofstra’s student chapter of ASCD (the Association for Supervision and Curriculum Development) in the School of Education presented a check for $1,800 in May to an East Rockaway elementary school to replace books destroyed by Superstorm Sandy. “Books are our most precious resource in the school,” said Nicole Facchini, president of the Hofstra ASCD chapter, “so it seemed appropriate to raise money to help restock the school library.” Money was raised through a sale of Hofstra sweatshirts and flash drive bracelets.

On November 9, administrators and students took a Hofstra bus filled with relief supplies took to Long Beach. Efforts to collect supplies continued throughout the month.

Debate 2012: Pride, Politics and Policy
At the Top of Their Game – And Their Class