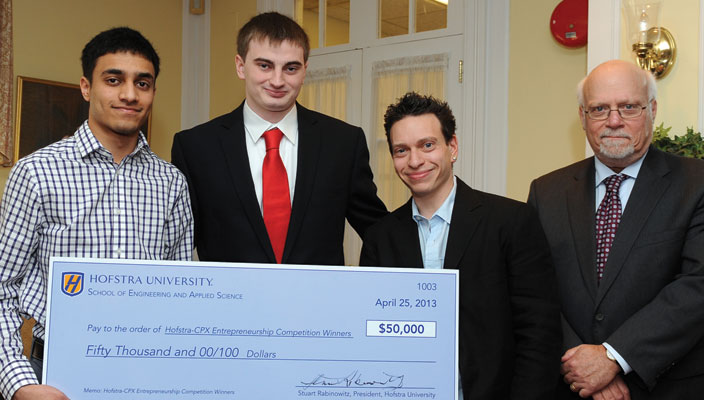 When Michael Seiman graduated from Hofstra University in 2001, he had more than a diploma to show for his work. He was CEO of a company he had founded while he was still in school.

That company, CPXi, has since grown into a Fortune 500 digital advertising enterprise with global reach and a CEO who wants to pay forward his success to a new generation of Hofstra students. With that in mind, CPXi sponsored an entrepreneurship challenge in which students competed for up to $75,000 – awarded as a single prize or split among several teams, depending on the quality of submissions.

“Growing up on Long Island and attending Hofstra University are both key elements that helped make me what I am today,” Seiman said.

“My own sense of entrepreneurship was honed by these experiences, and it is truly my honor to be able to give back in this way and show students how they can be in control of their own destiny.”

Rising to the Challenge

Beginning in January 2013, student-innovators from the School of Engineering and Applied Science and other disciplines formed teams and submitted ideas for business plans. Student progress was evaluated and monitored over six months. The contest culminated in a presentation of final concepts and business plans to a select panel of judges in April. The judging committee consisted of Hofstra University faculty and administrators, and CPXi officials.

[quote style=”boxed” float=”left”]What I’ve learned is that as a student, it’s important to make yourself visible and your passions known – you can’t let fear block you from trying – Michael Seiman[/quote]

“Entrepreneurship has always been the key to a thriving economy, leading to growing companies, employment and innovation,” said Dr. Simon Ben-Avi, dean of Hofstra’s School of Engineering and Applied Science and a competition judge. “In today’s sputtering economic climate, this kind of creativity is more necessary than ever. We are delighted to host this competition and to hone our students’ skills as innovators and future leaders.”

A total of 11 projects were presented for competition. Based on market research, necessity was the mother of invention for these creative ventures, from revamping an existing product or concept in the consumer market to simplifying present technology used in daily business – the focus was on improving present-day efficiency and ingenuity.

In April 2012, Hofstra University announced the winners of the Hofstra-CPXi Entrepreneurship Competition during an informal gathering at Hofstra Hall.

Hofstra President Stuart Rabinowitz told the competitors, “It’s a privilege to be president while you’re students here at Hofstra.  Your accomplishments are truly remarkable.”

Taking first place and a prize of $50,000 was a team of computer science majors, junior Shashank Sanjay and sophomore Michael Moskie, who developed a low-cost 3-D printer that is able to create useful tools and small structures for immediate application, such as a screw for a door hinge. Adding to the device’s fascination factor, it was assembled using materials created by another 3-D printer that the duo built prior to the competition.

“I thought we had a good chance of winning, but there were so many great submissions,” Sanjay said. “Managing school, activities, and the competition was tough, but we made it happen because Moskie and I worked well as team – we’re excited about the future.”

Another computer science student, junior Alexander Rosenberg, won second place and $25,000 for his project “EMR (Electronic Medical Record) Advantage” – an innovative system for creating better communication of health care records between providers. His work began shortly after taking a class on entrepreneurship at Hofstra, which helped him connect with a cardiologist at North Shore-LIJ Health System who was building a streamlined electronic medical record system. The busy doctor and innovator sought a student in computer technology to help take his concept to the next level.

Rosenberg, who hopes to bring his project to reality at North Shore-LIJ and hospitals worldwide, said, “The opportunity has provided me with more clarity about the future; it gave me direction. What I’ve learned is that as a student, it’s important to make yourself visible and your passions known – you can’t let fear block you from trying.

And, as all the teams learned, the real value of the competition came during the months of hard work, problem solving, teamwork and determination. “The experience, win or lose, will serve them well,” Ben-Avi said.        “Please don’t give up your creativity or your tenacity, and always be the person who says, ‘I’ll do it,’” Dr. Ben-Avi urged the competitors. “It’s a conviction that’s central to entrepreneurship.”

Editor’s Note: Michael Seiman has agreed to make the Hofstra-CPXi Entrepreneurship Competition an annual contest, and he’s increased the prize money for the 2013-14 competition to $100,000.