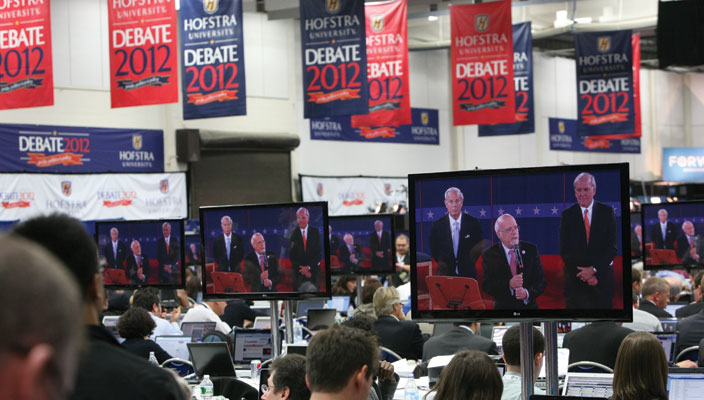 Thousands of members of the media and public officials from around the world descended on the Hofstra campus in the days leading up to the second presidential debate on October 16, 2012. For several, the debate was a homecoming, as they returned to their alma mater, walking the same halls and quads they had as students – this time as working professionals. Here are some of their stories:

Jaime Ball never thought she’d be in the news business.

“I thought I wanted to be a producer and work in the control room for an entertainment or variety show,” said Ball, who graduated with a Bachelor of Arts in video/television and a minor in speech and rhetorical studies. An internship at Fox News put her on a slightly different path.

“I happened to just fall into getting my internship at Fox News,” she said. “I’m not a news junkie at all, and being in this business forces you to be just that. So I feel more intelligent working where I do, because I wouldn’t be paying attention to presidential campaigns and elections the way I have been, because now I’m in the middle of the news all the time.”

Ball interned with Fox News twice before graduating from Hofstra. I found out the day that we had our graduation ceremony that I was hired at Fox,” she said. From there, Ball worked her way up and was promoted after a few years to unit manager and then to production manager, her current position, in 2005.

“I really was prepared through Hofstra for the whole communications business,” Ball said. “They (faculty) were very good about rotating the students between positions so you had a chance to do everything. You were the director for a show, and you were the audio operator. And you did camera and you edited. So knowing what our crew does, and what it takes to get that job done, has helped me to be a better production manager.”

Ball returned came to the Hofstra campus in 2008, when she worked the Obama-McCain debate. She served as the liaison, as she does now, among all the Fox News crew, producers and engineers. She marveled at all the additions and renovations to campus since 2008. “I didn’t dorm here, so the north side of campus is very new to me,” Ball said. “But The Lawrence Herbert School of Communication is so much different. It’s really nice to see the upgrades that have been done. Everything is HD now. It’s amazing.”

When Chief Taiwo Allimi graduated from Hofstra’s Lawrence Herbert School of Communication with a major in radio and television and a minor in political science, his plan was to return to Nigeria and work on changing broadcasting and media there to operate “the way I have seen media work in the United States and the way I had been trained by Hofstra University,” he says.

Allimi went to work for the National Youth Service Corps of the Nigerian Television Authority. In a year, he became a highly respected television personality, because, he said, “I put everything that I learned at Hofstra University to work.”

In 1980 Allimi was invited to help establish a television station for Niger State in Nigeria, and he ran that station for five years, after which another state government in Nigeria appointed him state commissioner. “I was responsible for information, social welfare, youth sports and culture,” said Allimi, who held that office for four years.

Later, Allimi was appointed the director general of Voice of Nigeria, the external radio broadcasting network for Nigeria, which he ran from 2000 to 2004. In 2003 he established the Nigerian Elections Debate Group and, over the past 10 years, he has been working with the organization to host presidential and gubernatorial debates.

In October Allimi came to Hofstra at the invitation of the Commission on Presidential Debates and the National Democratic Institute to observe the presidential debate and participate in a series of debate-related activities. “We exchange ideas and experiences of various countries that we can then take back to help in the continuation in the organization of presidential debates in Nigeria and our respective countries,” he said.

Having been absent from the Hofstra campus for more than 35 years, Allimi was overwhelmed by how much the University has grown in size and mission. “What I have seen on the campus since I arrived has been what I would describe as a revolutionary transformation,” Allimi said. “It is really, really satisfying and encouraging … that I came a distance to see the development that has taken place not just in terms of physical structures, but in terms of expansion of the academic life at Hofstra University.”

For Geoff Hoffmann, who graduated with a Bachelor of Science in communications, with a specialization in television production, an internship with WNBC-TV “opened doors for me.”

Thanks to that experience, Hoffmann was able to step into a role as a desk assistant at the station immediately following graduation. From there, he went to work at NY1 before moving over to MSNBC, where he has been on staff for the last 11 years.

Hoffmann, a senior director for MSNBC, said he was drawn to the field because each day brings a new challenge, and a new creative opportunity. “Though we do the same thing, in essence, on a daily basis, we’re able to create different scenarios with what we’re doing,” he said. “If you’re doing a show in the studio, it’s ‘how do you light it?’ ‘how do you block it?’ ‘what’s the rhythm of the show?’ ‘who do you work with?’ As directors, we put our little mark on it. It’s really an empowering position.”

And it’s especially satisfying to create programming that helps put his alma mater on the map. The president’s performance in the first debate at the University of Denver created an even bigger buzz around the Hofstra debate, he said. “I feel like this is really amped up and raised the profile for Hofstra University, which is great to see as an alumnus,” Hoffman said. “My wife, Andrea, is an alumnus as well. She graduated in 1995. So the two of us watching this are, like, ‘This is great! Go, Hofstra!’”

A little more than a decade ago, Adam Mancini was living on campus and preparing for a career in television. This past October, he was preparing a stage for Chris Matthews and other MSNBC on-air personalities who would be broadcasting live from Hofstra in the hours before and after the presidential debate.

Mancini works as an MSNBC director for several of the network’s dayside programs, including Jansing & Co. and NewsNation with Tamron Hall. He also directs special projects and assignments. A dual major in television and business, Mancini was working in television before he graduated. “I started interning for News 12 New Jersey and got hired freelance at the end of my internship, so my senior year I was working in the business as well as finishing up my education,” Mancini said. “Three months before graduation, they offered me a staff position there. I used a vacation day to attend my graduation.”

Mancini worked at several News 12 stations before joining MSNBC as a freelancer four and a half years ago. He was hired permanently about two years ago.

“It was great to walk into The Lawrence Herbert School of Communication and see that the University is still investing in the infrastructure,” Mancini said. “This is a tough program, compared to others, because you need that infrastructure and that technology to work with and be hands on. It’s great to see that they’re still putting money into the technology to make sure that Hofstra students are ahead of the game.

“The core faculty have been here for a long time,” Mancini said. “They still work in the business and know what they’re doing and make sure the people who leave Hofstra have that experience. And I think that today, when we look at the interns we get, our best interns have been Hofstra students.”