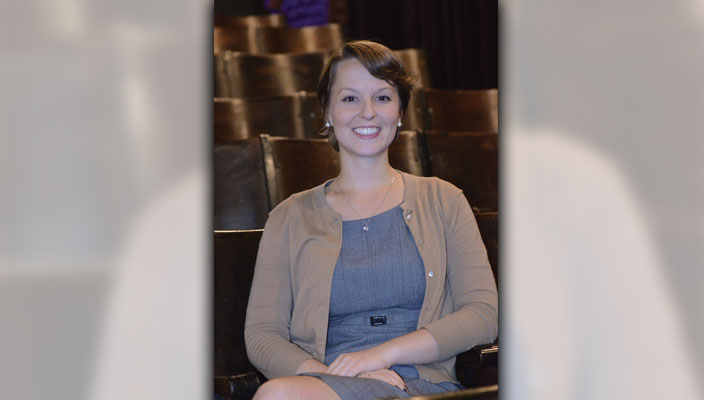 Becky Paine, Hofstra Class of 2007, is marketing director at New York Theatre Workshop (NYTW), an off-Broadway organization that mounts full productions of four plays a year and also uses its resources and facilities to cultivate new talent and to present workshops of developing plays and musicals.

Rent, Once and Peter and the Starcatcher are among NYTW’s success stories, having first premiered at the organization’s theater on East 4th Street in Manhattan, before becoming critical and commercial Broadway hits.

Paine, originally from Pennsylvania, majored in public relations and minored in music at Hofstra.

Like many Hofstra alumni, Paine found her internship experiences to be extremely valuable. “Suzanne Berman [associate professor of public relations] helped me get an internship at Jazz at Lincoln Center, my first experience in the nonprofit sector,” Paine said. “She is really well connected in the cultural world in New York City and was a wonderful mentor. And Ellen Frisina [also associate professor of public relations) spent a lot of time helping me figure out what I wanted to do and what avenues to take.”

After completing the internship at Jazz at Lincoln Center, Paine was eager to find an opportunity in theater. “I really have a passion for the performing arts. I knew I wanted to stay in nonprofit.” She landed an internship with NYTW in spring of 2007. She was assigned to help NYTW launch a group of young patrons called the 4th Street Bar Association, and work on the group’s first gala event.

Months later, the woman who had supervised Paine’s internship was promoted to director of marketing for NYTW. She asked Paine, who by then had graduated from Hofstra and was working for a technology firm, to come back and be her assistant.

“We are a small staff here. We rely so heavily on our interns,” Paine says. She advises current students applying for internships to look for organizations like NYTW that “will let you get your hands dirty as opposed to simply observing.

I think nonprofits sometimes are the best places for that because they often need help the most. I would always advocate for an internship with a nonprofit  – even if your goal is to eventually work for a corporate entity.”

As the marketing director for NYTW, Paine’s responsibilities are to oversee single ticket sales and the organization’s membership program. “We are a subscription-based theater, so half of what I do is try to get people to invest in our entire season and see our four main stage shows.”

[quote style=”boxed” float=”right”]I see myself still working in the nonprofit sector. I’m really in love with the passion all my colleagues bring to the table and how everyone unites behind a common goal – Becky Paine[/quote]

Paine is also proud to have a hand – since her intern days – in cultivating NYTW’s young patrons program. “Theater audiences do tend to skew older. I’m so proud that we take the time and effort to build relationships with people in their 20s and 30s. We plan post-show receptions for them and the cast members, and we usually do one large gala per year.” The young patrons program has grown to more than 50 members and raised $16,000 for NYTW this past season.

During her six years with NYTW, Paine has had the opportunity to see and promote many workshops and productions. When asked to name her favorites, she says Peter and the Starcatcher has a special place in her heart. The play, which was on Broadway until the start of 2013, imagines the backstory of Peter Pan. “It came out around the same time as the hoopla for Spider-Man was going on. I think we were doing a show that was just as inventive and beautiful, without all that money behind it. It is theater at its best.”

When asked where she sees herself in 10 years, Paine said: “I have an interest in the bigger picture, which may someday be a general manager or managing director position. I see myself still working in the nonprofit sector. I’m really in love with the passion all my colleagues bring to the table and how everyone unites behind a common goal.”

The Dish on Ian Knauer
Weidman Takes UFC by Storm