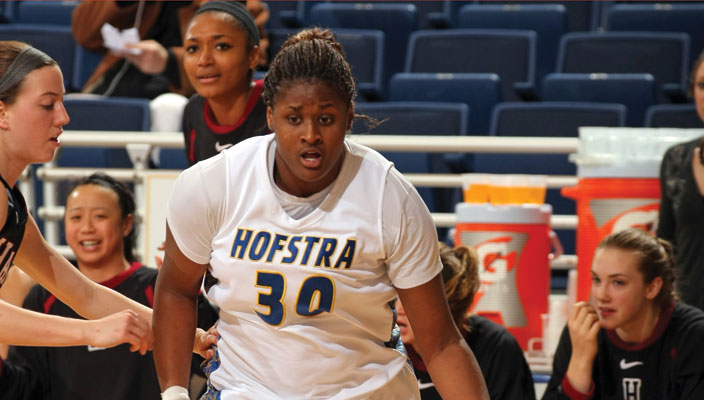 At every college, academics and athletics should be mutually beneficial and have a positive impact on the campus community. There is no better example of that than here at Hofstra, where women’s basketball forward Shante Evans, softball ace Olivia Galati and baseball starter Joe Burg consistently demonstrated how a student-athlete can enhance a college.

Evans, who majored in history, is a three-time Associated Press Honorable Mention All-America selection and walked in the University’s December 2012 commencement.

Galati, who majored in physical education, was named a Second Team All-American in the spring (one season after earning first team honors) and participated with six of her teammates in a private graduation ceremony with Hofstra University President Stuart Rabinowitz and other distinguished University leaders. Burg, who became just the second-ever Hofstra student to be a Rhodes Scholarship finalist, tied for the Hofstra lead in wins in 2013. The Lindenhurst, Ill., native began a Ph.D. program at Stanford University in August.

Evans, Galati and Burg all credit a collaborative effort among the coaches, faculty, University and Department of Athletics support staff in helping them find success both as scholars and athletes.

“The discipline we had as a team and the work ethic that was instilled in us by the coaches taught me what to do, and how to do it right,” Galati said. “We learned not to take shortcuts. My coaches taught us not just about the game, but about life.”

Alumni support allows the University to make tangible improvements, while creating a shared sense of community.  Thanks in large part to generous contributions from Hofstra Pride Club members, the University installed lights at the Hofstra Softball Stadium and renovated the grandstand at baseball’s University Field. But alumni involvement extends beyond the brick-and-mortar structures. The shared sense of community serves to encourage recent graduates to stay involved as they begin the next phase of their careers.

“I would love to give back to the program and help out in any way they need,” Burg said. “You become a lifelong fan of Hofstra sports and you want to follow the example the alumni have set.”

Evans said seeing Hofstra Vice President and Director of Athletics Jeffrey A. Hathaway at games was just one example of the support from the administration. After finishing her career as the Pride’s all-time scoring and rebounding leader, Evans also credited the coaching staff with modeling her as an athlete and a person over the last four years.

“As a student-athlete, you want to know your school is supporting you through the wins and losses,” Evans said. “The coaches helped me grow as a person. I came in as 17-year old freshman, and they worked to improve my game. The best part was knowing I could talk to them about life and not just basketball. I thank them for putting me in position to step up and lead the team.”

Galati and Burg, a physics and mathematics major, both earned First Team Academic All-American honors this past season, which marks the third time that Hofstra has produced two first team selections in the same year. Despite the time constraints imposed by playing a Division I sport, Galati said the support from the faculty helped her flourish academically.

“I loved the closeness of the teachers and students because of the small class sizes,” Galati said. “I knew if I ever needed anything, I could just call and they wouldn’t hesitate to offer their assistance.”

Spending their entire collegiate careers at Hofstra has made all three student-athletes a part of a long tradition, which is something each said is a valuable connection.

“It was great to know that we were playing for something bigger than just our team,” said Burg, who will be concentrating his postgraduate work in applied physics and nanoscience. “Now that I’m an alumnus, hopefully I can follow the lead of others before me and support the new classes going forward.”

Lending a Hand After the Superstorm
New Coach on the Court: A Chat with MBB Coach Joe Mihalich