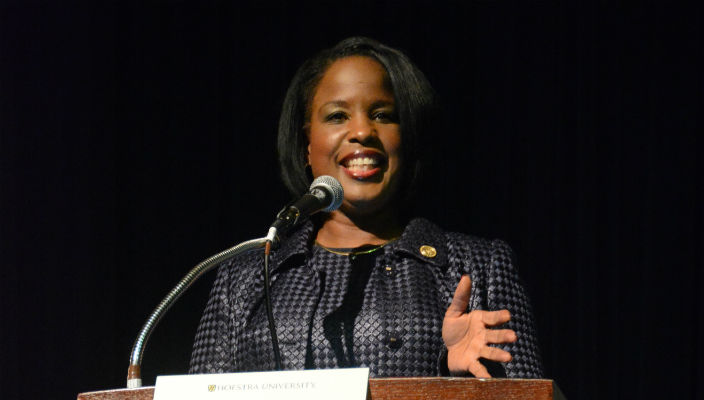 Changing politics and policy begins with exercising your right – and power – to vote, NAACP National Chairperson Roslyn Brock said during a speech at the Student Center Theater that was part of a symposium commemorating the 150th anniversary of the Emancipation Proclamation.

“Our votes are our voice and our votes are our power,” Brock said, lamenting the low turnout among young voters in the recent elections. “We must demand that our elected officials move this nation forward, not backward.”

“The March on Washington set into motion the wheels of justice that would eventually enable people to feel that they belong, regardless of the color of their skin, their gender, their sexual orientation, or their physical ability,” Brock said. “While we’ve made unquestionable progress in our nation, we still have a long way to go to fulfill Americas promise for many of her citizens.”

While Brock stressed the importance of political involvement, she said the best way to reach out to a younger generation was to find common ground first, and then bring social justice into the conversation.

“You have to meet them where they are, not drag them to where you are,” she said.

“It has to be something they’re interested in,” said Elagance Rowell, who is majoring in business and economics Something like the Trayvon Martin case, everybody was talking about it so that can draw in the youth.”

Before transferring to Hofstra, the Rowell sisters started a chapter of the National Action Network at St. Peter’s University in Jersey City, N.J.

“With race, it’s always a touchy topic,” said Eloquence Rowell, who is a political science major.”It’s something that people feel isn’t going to change…but without us taking steps to change things, not too much will happen for us.”

This story was written by Alexis Willey ’16