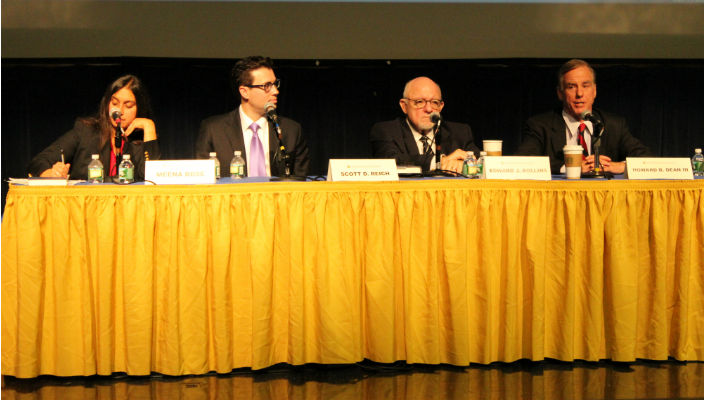 As the 50th anniversary of the assassination of President John F. Kennedy nears, his call to public service is still relevant for today’s young people, accordingto the author of a new book examining Kennedy’s life and legacy.

“Kennedy’s message resonates 50 years later because it offered a timeless vision: to work together and look past our differences,” said Scott Reich, an attorney and the author of The Power of Citizenship: Why John F. Kennedy Matters to a New Generation. Reich was part of a panel discussion sponsored by the Peter S. Kalikow Center for the Study of the American Presidency that also featured Senior Presidential Fellows Howard B. Dean and Edward J. Rollins and focused on what Kennedy’s call to public service means for the millennial generation. The panel was moderated by Dr. Meena Bose, director of the Kalikow Center. 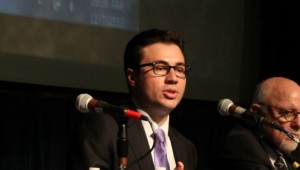 “You are the first generation to see yourselves as citizens of the world before citizens of America… I don’t even refer to you as millennials, I refer to you as ‘globals,’” said Dean, the former governor of Vermont,  2004 Democratic presidential candidate and one-time chairman of the Democratic National Committee.

The panel discussion was one of several events in the symposium, From the Emancipation Proclamation to the Election of Barack Obama and the Death of Trayvon Martin.

While Kennedy’s devotion to citizenship remains part of his legacy, the definition of public service is changing, Dean said, because of technological advances and cultural changes.

“Instead of going to Congress and seeking a redress within the political system, you guys have figured out a way, partly because you were empowered from the start by your parents, and partly because you have this unbelievable engine of organization that we never dreamed of,” Dean said.  “You can go right to Congress … and say ‘You better change or else,’ and right to the companies and say ‘you better change this or else.’”

This change cuts both ways, because as easy as it is to stand by a cause, technology makes it easy to move on to the next big goal. Dean said this would be the greatest struggle for the “global” generation.

Flanagan said that viewing ourselves as global citizens “is a huge step forward, given that 50 years ago we still saw ourselves as American citizens and even sometimes as citizens of our separate states.”

Young people can be a powerful force for change in America, and Kennedy tapped into that potential, Reich said.  “Kennedy swept a generation of Americans into public service, “ he said. “If you want to make a difference in any profession, it’s about being inspired and passionate. But you have to take the steps to get there, no one is going to do it for you.”

This story was written by Alexis Willey ’16.