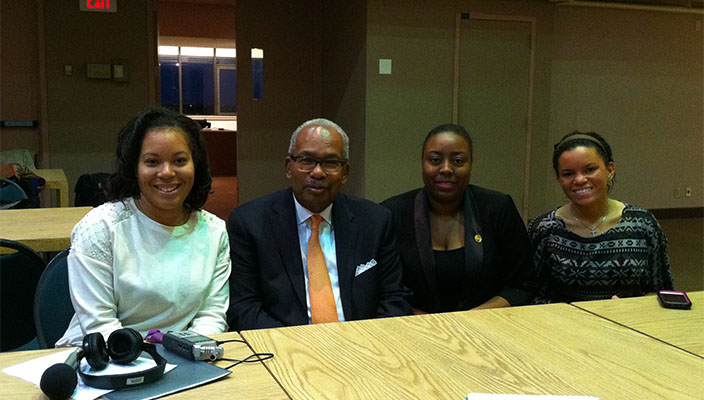 “There had to be people willing to challenge. I thought if I could open the door, then other people would be able to walk through,” said Ernest Green, one of the Little Rock Nine, of what he was hoping for when he and his parents agreed to his being on the front line of school desegregation in 1957.

Green, a civil rights activist, was one of the Little Rock Nine –the first African-American students to integrate Little Rock Central High School in Arkansas. He was the only senior of the group and became the first African American to graduate from the previous all-white school.

Green met privately with Hofstra students from Long Island Report, The Chronicle and WRHU prior to a lecture that drew more than 200 people on Tuesday night. The event was part of a symposium “From the Emancipation Proclamation to the Election of Barack Obama and the Death of Trayvon Martin”, sponsored by Hofstra Cultural Center. The symposium continues November 7 and 8.

“It was my belief and it was my parents’ belief that education was the key to a better future,” he said.

“We had a view that this school was going to provide a better education than what I was receiving, and that the future was going to be better than the present.”

Little Rock had the reputation of being a moderate Southern city, and Green said he was not aware of the hostility he and his classmates would be facing. The 101st Airbourne Division of the U.S. Army was sent in to escort the nine students into the school and provide protection. “I was in the middle of something I didn’t expect,” he said, “but I knew it wasn’t a time to back down. We had to have people willing to challenge. This was the time of Rosa Parks, Jackie Robinson, and the murder of Emmett Till.”

When asked if he thinks that younger generations are not fully aware of continuing racial tensions today, particularly since the election of President Barack Obama, Green said:  “I see through the eyes of my children, who are now grown, and I think this generation has been maligned. I think they do see changes and they know what needs to happen. Each generation has to find that moment in which they challenge, no matter what achievements have been made. We need to, as often as we can, remind young people how far we’ve come and what is left to do. History is important. The future is more important. This generation is better prepared for it.”