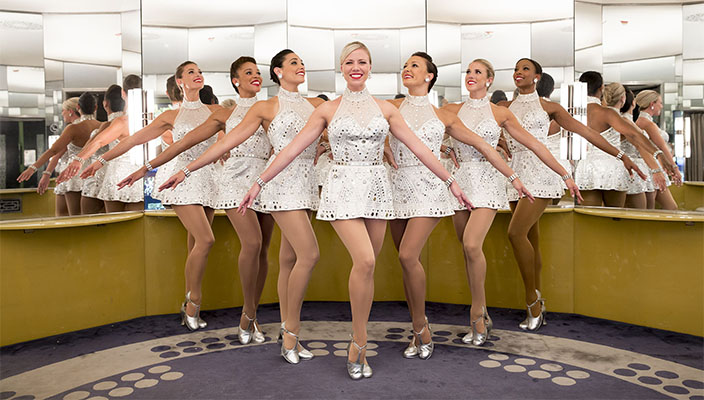 Since the first Radio City Christmas Spectacular in 1933, both the show and the Rockettes have become inseparable from New York’s holiday season and the cultural landscape. Being a part of this famous tradition is a dream come true for Hofstra dance alumna Tara Dunleavy-Tubridy ’04, who has been a Rockette for the past seven years.

The Rockettes’ synchronicity onstage reflects their friendship and affection for one another when they are not performing.  Tara says, “Generally when you are dancing in a show with that many girls, you create a work bond and a friendship bond. I’ve made friends for life here. We go through something as a team that no other dancers experience.”

Tara, who grew up in Queens, NY, began studying dance at the age of 3. She danced competitively, focusing on jazz and Broadway styles. When it came time to think about college, Tara says, “I knew I wanted to major in dance, but I didn’t want to go too far from my family. Hofstra was one of the schools we visited, and I fell in love with the campus, the program and the facilities. Being a Hofstra student was one of the best experiences of my life.” When asked about professors who were mentors, she is quick to credit Robin Becker, Stormy Brandenberg and Lance Westergard. “All of the faculty were so encouraging and supportive. You could talk to them about class or about the business. They were amazing.”

For Tara’s senior practicum, she was accepted into the Rockettes’ Summer Intensive, which flew participants out to Alabama for a week where they studied with a director and the Rockettes’ choreographer to learn their trademark dance style. “It was an awesome experience. And my professors loved that I had branched out into a different direction.”

Following graduation, Tara kept busy auditioning and joined the casts of the national Broadway tours of Oklahoma! and Movin’ Out. When the opportunity came up to audition for the Rockettes, Tara, who stands “less tall” than most Rockettes at 5’6”, wasn’t sure if she even had a shot. “It was a huge shock and a blessing to be cast. The timing just worked out perfectly for me.”

The Rockettes keep busy year-round with special appearances on shows like Today, America’s Got Talent, The Colbert Report and other news and variety programs. The dancers’ holiday season starts in September and runs up to New Year’s, with rehearsals and the actual production of the Christmas Spectacular.

“People are always asking me, ‘What’s your favorite part about being a Rockette?’ Of course, you come into this job because you love to dance and perform. And being on the Radio City stage with 6,000 people in each audience is indescribable. With the Rockettes we get to do so many things, meet so many amazing people. I just feel it’s made me a more well-rounded individual, and I’ve acquired so many skills that I’ll use further on in life in other careers.”

When asked what she thinks would surprise people about life as a Rockette, Tara answers, “How hard it is – physically, emotionally and mentally. It really is the hardest thing I’ve ever done as a performer. We’re doing up to 16 shows a week, four to five shows daily. It takes a toll on your body and also your mind. The other thing is that we’re also working during the holidays. Thankfully, I’m from New York and get to see my family, but some girls don’t. So we become our own family, like a sisterhood. We have a bond that not a lot of people understand.”

Just like the Christmas Spectacular has its season, so does the career of a Rockette, and Tara has already started planning for her career, post-Radio City. “I’ve been going back to school in the off-season, when I have more free time. I’d like to pursue a second career in physical therapy. We have a great athletic training team that works with the Rockettes, and I’ve had a few injuries – that just comes with the territory as a dancer. Working with our trainers has really opened my eyes to another side of being in this business. I’d like to share my knowledge and experiences as a dancer with other dancers, performers and athletes.”

For the next generation of students who aspire to work in the performing arts, Tara says, “Be persistent. There are lots of Rockettes who had to audition a few times before getting hired. Whether you are hoping to work at Radio City or any other job, you have to have thick skin in this business. You’ll hear a lot of no’s before you get a yes.”