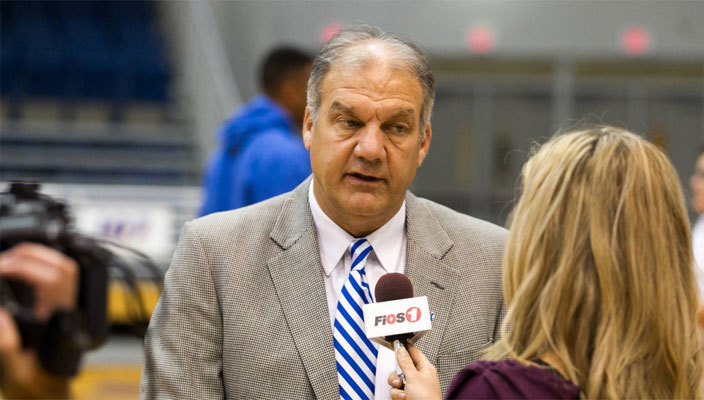 The Hofstra Men’s Basketball team will commence the 2013-14 campaign on Friday when the Pride hosts Monmouth at 7 p.m. in the Mack Sports Complex.

The contest will mark the Hofstra debut for new head coach Joe Mihalich, who came to Hempstead after 15 highly-successful seasons at Niagara.

For ticket information to Friday’s game and all Hofstra Basketball contests call (516) HOF-TIXX or visit GoHofstra.com/tix.

Mihalich, who guided the Niagara University men’s basketball team to five postseason appearances since 2003-04, was named the 12th head coach in the history of the Hofstra University men’s basketball program on April 10, 2013. Mihalich led the Purple Eagles since 1998 and during that time he won 265 games, earning a pair of NCAA Tournament berths and making three National Invitation Tournament (NIT) appearances.

The roster the Pride will showcase this season will feature a slew of new players to join with the five returnees from last season. Despite only having five players back from a season ago, the Pride does return three starters in sophomore forward Jordan Allen (Bay Shore, NY), junior forward/center Moussa Kone (Bronx, NY) and senior forward/center Stephen Nwaukoni (Queens, NY).

All three can leave their marks on the game in different ways as Nwaukoni is one of the top rebounders in the conference and led Hofstra with 7.9 rebounds per game, while scoring 6.8 points per contest a season ago. Nwaukoni started 15 of the 25 games he played in before an injury ended his season prematurely.

Kone is a high-energy player whose ability to run the floor will certainly assist Hofstra in Coach Mihalich’s new offensive philosophy. Kone averaged 6.5 points, 4.4 rebounds and was second on the team with 25 blocked shots last year. He played in all 32 games, making 16 starts.

The last of the Pride’s three returning starters is Allen, who might be the Pride’s most versatile player. His ability to play multiple positions will be a huge asset to Hofstra this season, as depth could be a factor. Allen also played in all 32 games in 2012-13 and made 25 starts. He chipped in with five points, 2.9 rebounds, 15 blocks and was second on the squad with 29 steals.

Hofstra’s short two-game homestand to open the season will continue on Sunday when the Pride hosts Fairleigh Dickinson. Tip-off for that contest will be 4 p.m. Please call (516) HOF-TIXX or visit GoHofstra.com/tix for more information.