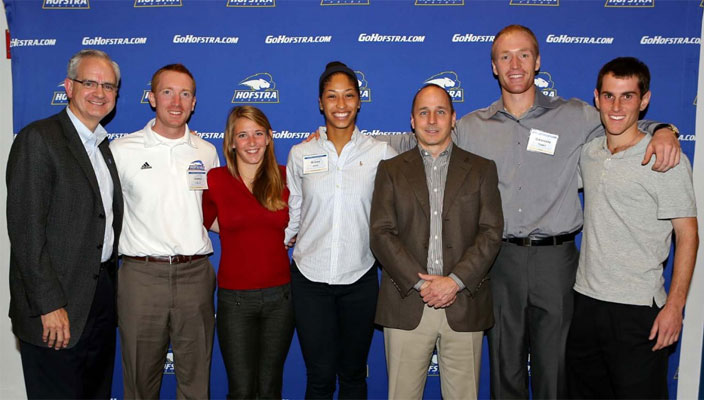 “The entire Hofstra community is thrilled to have had the opportunity to host the Colonial Athletic Association Student-Athlete Advisory Committee (SAAC) Leadership Summit,” commented Hofstra Vice President and Director of Athletics Jeffrey A. Hathaway. “Sunday night was a very special evening for the Summit attendees as they had the opportunity to meet and interact with New York Yankees Senior Vice President and General Manager Brian Cashman as he offered his thoughts on leadership, sports management and a multitude of other topics. His comments regarding the value of being a student-athlete and the preparation that it provided for the transition into the workplace were invaluable. Safe to say that the student-athletes learned a tremendous amount about how to be successful in life from one of the premier sports executives in the world. Thanks to Brian for taking time from his busy schedule and making this year’s CAA SAAC Leadership Summit such a memorable event for all those who attended.”

Cashman, who has served in his current role with the Yankees since 1998, also answered questions from the audience and posed for photos with those in attendance following his remarks.

The event got underway Sunday afternoon with opening remarks from Hathaway and University Senior Vice President and Provost Herman Berliner followed by a workshop conducted by Shamaree Brown of the Atlantic Coast Conference and concluded Monday with a series of breakout sessions including CAA Commissioner Tom Yeager meeting with the student-athletes in attendance, a seminar on CAA Social Media and Digital Production initiatives and a report from National SAAC Member Kate Williams (Towson) on the NCAA Governance Structure Review Process and other National SAAC issues.

The CAA SAAC Leadership Conference featured a male and female student-athlete from each of the nine Colonial Athletic Association member institutions as well as an adminsitrator from each school. The two-day event allowed the group to discuss current issues in college athletics as well as ways to enhance the CAA student-athlete experience.