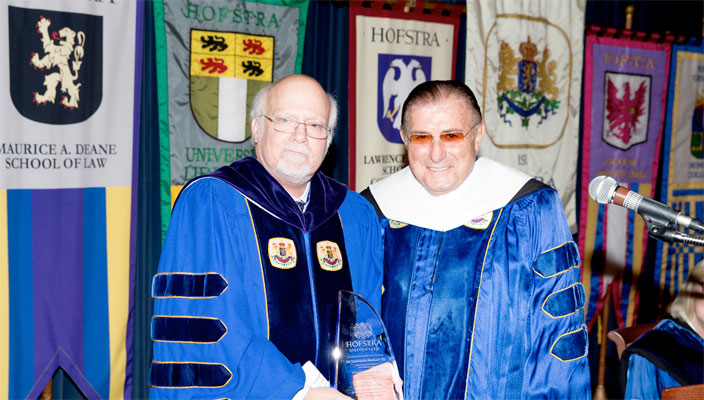 Hofstra University held a convocation today to commemorate the official naming of the School of Communication for distinguished alumnus Lawrence Herbert ’51, inventor of the revolutionary Pantone® color matching system.

On hand to honor Herbert in the Student Center Theater were President Stuart Rabinowitz, Provost and Senior Vice President for Academic Affairs Herman Berliner, Chair of the Board of Trustees Janis Meyer, Dean Evan Cornog and department chairs from The Lawrence Herbert School of Communication, as well as an audience of senior administrators, faculty, staff and students.

In noting that Herbert has won virtually every award that the University can bestow — including Alumnus of the Year, an honorary doctorate in 1989, and a professorship in his name — President Rabinowitz said: “But this is different.  The naming of a school in perpetuity after an individual is different from all the other honors. It is, in my opinion, the very highest honor a University can bestow because it recognizes exceptional dedication and enduring commitment to the institution and its ideals.”

The Pantone® system was not just about creating a color identification system but also about developing a more precise way for people to communicate, Herbert said. Supporting the School of Communication was important to him, he said, because it prepares future generations to take positions of leadership.

A former member and officer of the Board of Trustees, Herbert is an innovator, entrepreneur and philanthropist.  Under his leadership, the Pantone®  system became the international standard in hundreds of industries, among them printing, publishing, graphic arts, film and video.