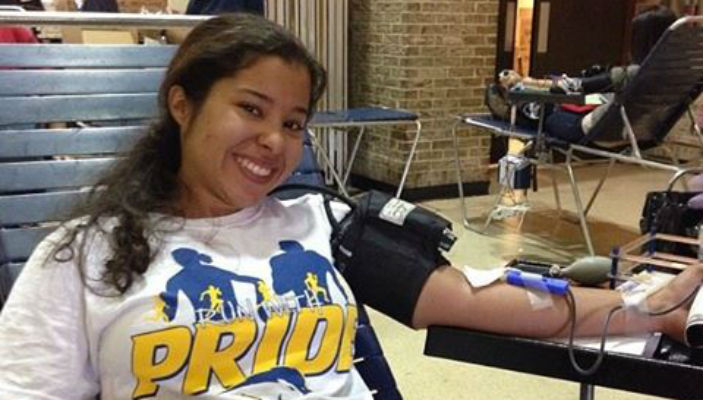 A year after Superstorm Sandy tore through Long Island, the Hofstra University community came together today for the “Super Community Blood Drive” in an effort to replenish blood supplies lost in the storm.

The drive, which was sponsored by the Long Island chapter of the New York Blood Center, drew 423 donors, compared to 358 last year, organizers said.

Because blood only lasts for 42 days in storage, the frequency of drives is important. After Superstorm Sandy, many blood drives were cancelled, depleting the supply by an estimated 10,000 units of blood, officials said.

“So many places were so terribly distraught after the storm, like Rockaway and Long Beach. But we tried to run as many [blood drives] as possible and Hofstra was one of the few that wasn’t cancelled,” said Doreen Friscina, account manager for Long Island Blood Services, which was running the blood drive.

Rachael Siegel, a junior music education major, used to be afraid of needles. But she overcame after her fears and decided to donate blood for the first time.

But Friscina said she saw just as many regulars as new faces at this year’s drive: “I think a lot of students who grew up on Long Island and are used to participating in blood drives at their high schools are used to donating blood.”

All donors received special t-shirts and bracelets and were entered to win two tickets to Super Bowl XLVIII, as part of a partnership between the Blood Center and the XLVIII New York/New Jersey Super Bowl Host Committee.

This story was written by Alexis Willey, ’15