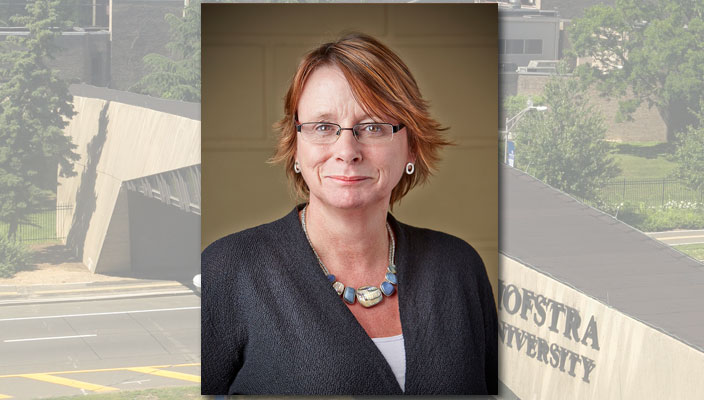 Kelly Fincham is an assistant professor in the Department of Journalism, Media Studies and Public Relations in the Lawrence Herbert School of Communication.  She teaches undergraduate and graduate courses in advanced online journalism, and is the faculty advisor of Hofstra’s award-winning student-run news website, LongIslandReport.org. Professor Fincham has more than 25 years of experience as both a print and online journalist in Ireland, Australia, and New York, and is the founding editor of IrishCentral.com, the leading Irish-American website.  She came to the United States for a year-long break in 2000, and decided to stay.

You were the recipient of a prestigious fellowship this summer that allowed you to spend two weeks in the newsroom at KUT Radio in Austin, Texas, where you got to observe their social media practices.  What did you learn?

A. The fellowship was a great opportunity because I got to observe and absorb the way journalism is practiced in a multiplatform world. At KUT, the focus is always on good radio stories but then building out the story so it can be posted online.  The journalists there have embraced social media and the new tools they need for radio stories which are expected to go beyond a strictly audio audience.  Just as newspapers –  The New York Times, for example – have become video publishers, radio is now a viewing and reading experience.  In addition, KUT is part of National Public Radio’s Local Stories Project which is working to make more radio content shareable on social media.  I returned with a full notebook of ideas for classes and workshops based on the two weeks in Austin.  And, KUT’s online editor Wells Dunbar was just here at Hofstra to talk to our students. He presented several workshops showing how the KUT newsroom works in the social media era.

You started off as a busy working journalist; what made you transition into teaching?

The Sept. 11 attacks. I was visiting Vancouver Island when the Sept. 11 attacks happened, and I came back to New York on one of the first flights allowed back in. I covered the Irish community for the Irish Independent, Irish Voice, and Irish America magazine. For six months, it was 24 hours a day of stories of misery and heartache.  By March 2002 I knew I had to step back. There were so many Irish victims from Cantor Fitzgerald to the Aon Corporation to the Fire Department.

One story, which haunts me still, was the death of Kieran Gorman.  Kieran, his wife, and two young sons had just arrived back in New York on Sept. 9 after their summer holiday in Ireland.  He worked for an Irish company and was asked to come in on Sept. 11 to the World Trade Center to cover for someone else. His bags were barely unpacked. He called his wife, Ann, after the first tower was attacked and told her he was getting out. That was the last anyone ever heard from him. His family held a service for him with an empty coffin a few weeks before Ann gave birth to their third son, Kieran Jr., in November 2001.  His remains were eventually identified in February 2002 and flown home to Ireland for burial.

In March 2002, I applied to Dublin City University (DCU) for their research master’s program for professional journalists. I had never been exposed to the academic part of journalism and I was truly thrown in at the deep end. The degree was based on the quality of the research, which was a comparative analysis of The New York Times’ (NYT) coverage of the lead-up to the invasion of Iraq.  The NYT did not fare well in my 50,000-word thesis, which compared it to the Irish Times, and as I’m making my presentation at DCU, a faculty member with an American accent starts to challenge my findings. His name was Steven Knowlton, formerly of the School of Communication here, and he had recently moved from Hofstra to DCU. He asked me to do a guest lecture – after some good-humored theoretical exchanges! – and later told me that I should really think about teaching.  He said, “I think Hofstra’s looking for adjuncts, you should throw your name in.”  And I did.

What sparked your interest in covering online/digital media, and at what point did you know that this is where the industry was headed?

Probably back in 1990; I was working for the Sydney Telegraph and the Australian Financial Review and we could communicate with other members of the staff who were all over the country by using real-time messaging connected to the terminals. There were no mice in those days, just keyboards. I was a wire editor and rewrite person for the papers and I began to see how information could one day be delivered to home-based versions of the computers we had in the office. When Netscape introduced the web browser, I started to learn more about how the web worked and went to night school to learn HTML.  I’m one of those people who like to learn new things.  My attitude has always been, I can’t stop the train from coming down the tracks so I always try to stay ahead of it. I don’t want to get run over by it.

What are some of your most memorable moments as a journalist?

Meeting President Obama in the White House in 2009 for St. Patrick’s Day.  I was the executive director for the Irish Lobby for Immigration Reform and I also wrote about it for Irish Central.   After the event, President Obama and I shook hands and he thanked me for my work. I was tongue-tied and blurted out, “I think you’re amazing!”  But the biggest story I’ve ever reported on would be the Sept. 11 aftermath, primarily for the Irish Independent and The Irish Voice.

What’s your one take-away message for students?

Don’t put anything on social media that they wouldn’t tell their mother, their professor or broadcast on CNN.  Everything on the Internet lives forever. There’s no hiding place, there’s no privacy.

In your last 13 years here in the United States, is there anything about American life that you still don’t understand or gives you culture shock?

What is the biggest issue in social media journalism now?

There are multiple issues in social journalism but I am most focused on ethics, particularly the ethics of reporting. For example, just because you can doesn’t mean you should. There’s so much of a rush to be first with the information at a breaking news story that it goes back to the old AP (Associated Press) adage, it’s better to be right than first.  We need a uniform code of ethics that addresses social media. Instead we have a situation where journalists say that the existing ethics rules are enough and yet we will see news organizations prematurely reporting that Gabby Giffords is dead, Ryan Lanza (not his brother Adam) is the Newtown shooter, and that the Boston Marathon suspects have been arrested.  It’s easier to correct things now because of social media, but we need to develop a series of guidelines to try and prevent the bad reporting in the first place.

If you were not a journalist or teacher, what would you be doing?

I love the idea of being right at the end of the world waiting to spot the whales as they make their way south.  But I think I’d miss the Wi-Fi.