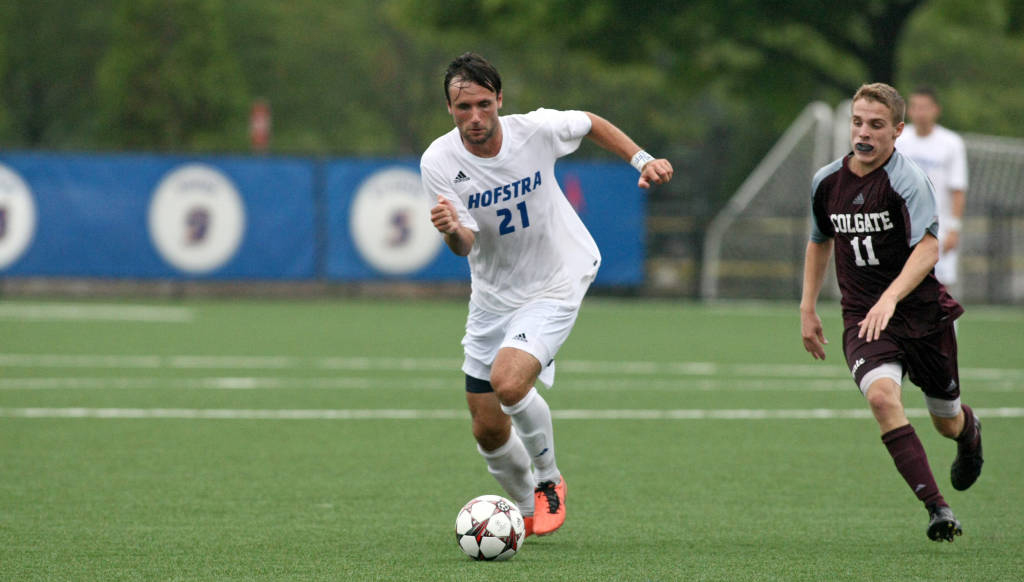 The instruction is issued more as a challenge than a command.

“Don’t use any spin,” Chris Griebsch says to Ignacio Gorrono as they pass the ball near the Hofstra Soccer Stadium sideline on an unseasonably warm late October afternoon.

Griebsch shows the senior know-how that comes with four years of starting experience, lofting pass after pass that stay on a linear trajectory. Gorrono sends in four balls that curve to the right before finally sending in a true pass that accomplishes the instruction. It’s a simple post-practice session that embodies the relationship between an upperclassman and a freshman.

Less than 24 hours earlier, the duo linked for what proved to be a milestone goal. Griebsch sent in a pass that almost landed directly at Gorrono’s foot, allowing the freshman to score at the top of the six-yard box in the 50th minute in a 5-2 win over James Madison. It was Griebsch’s sixth assist of the season and the 30th of his career, which set Hofstra’s all-time record. Griebsch moved past Patrick Geraghty, who compiled 29 assists from 1998-01.

“Individual numbers don’t usually mean that much to me, but it’s special because it’s my senior year and to get in the record books is important since this program has been so special to me,” Griebsch said. “Hofstra gave me a scholarship and has allowed me to pursue a degree. It’s already been a special year and I’m just trying to extend it by helping my team win games and make a run at a championship.”

Griebsch leads the Colonial Athletic Association in assists. If that figures holds, it will mark the third consecutive season the Dessau-Rosslau, Germany native has led the league in assists. His value extends beyond pure statistics. Griebsch, along with co-captains Tyler Botte and Maid Memic, have helped tutor a roster that typically starts 4-to-5 freshmen per game. As a first-year forward, Gorrono has developed an even closer connection to Griebsch.

“On that goal, I only had to push it in because he did everything. He gave me a great pass,” Gorrono said about Griebsch’s record-breaking assist versus  JMU. “He’s a very special player and makes everyone else better. He distributes the ball so well.”

Botte has played with Griebsch for four seasons starting with freshman year in 2010. In that time, Botte has seen Griebsch become Hofstra’s primary offensive weapon on set pieces. His ball-striking capabilities on corner and free kicks has also helped facilitate scoring chances for Botte, who has 11 career goals.

“When it comes to corner kicks, he’s the best I’ve ever played with,” Botte said. “Without his crosses, I wouldn’t have anywhere near the amount of goals I’ve scored at Hofstra. He’s truly a special talent and a huge part of our success.”

Botte’s ability to head in set pieces has helped Griebsch add to his assist total. He has also solidified his play-maker reputation by linking well with Memic. Since Memic arrived at Hofstra in 2011, Griebsch has assisted on 11 of his goals to give Hofstra one of the most proficient forwards in the conference.

“I have to thank my teammates who finish off plays with goals, so it really is a team stat,” Griebsch said.

Hofstra Head Coach Richard Nuttall has seen Griebsch improve from the time he came out of prep school in Jena, Germany. A one-time track star, Griebsch is now known for excelling on corner kicks and free kicks in which a deliberate approach can lead to goals.

“Chris works very hard at this game and he’s probably one of the best crossers of the ball in the country,” Nuttall said. “He’s evolved over the years and he thoroughly deserves to get the record. His service into the box has been fantastic and we’re all very pleased he’s earned such a prestigious mark.”

Griebsch finished one assist shy of Hofstra’s single-season record of 12 last season. He has an outside shot at breaking the record this season, though he said the focus has been on helping a young roster understand what it takes to be competitive in pressurized CAA games. With 15 foreign-born players on the roster, Griebsch has also tried to mentor the young international players on adjusting on-and-off-the field.

“At the start of the season, you could see there was talent. We needed to come together,” Griebsch said. “We had to get used to the American style since we have so many European freshmen who are not used to the playing style of college soccer. But you can see everyone is stepping them up and we’re improving game by game.

“You have to talk to the young players sometimes and keep their confidence up,” Griebsch said. “The season’s very short and it’s tough for freshmen to realize it. It’s our job as upperclassmen to talk them up on the field.”