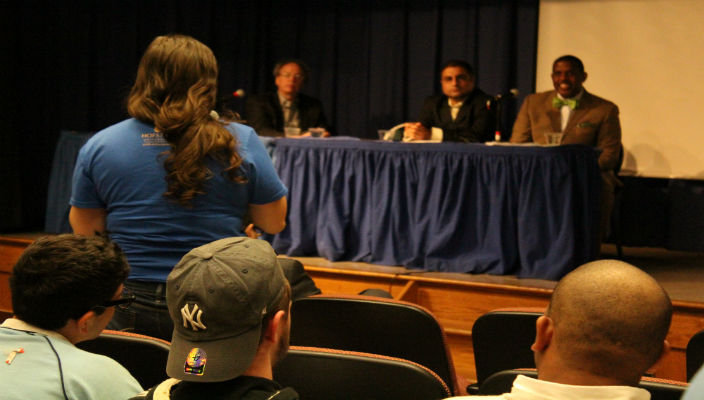 Students, faculty and community members filled the Guthart Cultural Center Theater this morning for a spirited forum on the practice of police surveillance of Muslim-American communities in the wake of the Sept. 11 terrorist attacks.

The panel was a key event in today’s Day of Dialogue programming, and featured New York State Senator Kevin Parker, the primary author of a recently passed bill establishing an Inspector General’s Office to oversee the New York City Police Department on this and other issues including Stop and Frisk.  Joining him was Dr. Hussein Rashid, an adjunct professor in Hofstra’s Department of Religion and a well-known international speaker and consultant on Western-Muslim issues.

Both speakers noted that a collective fear about security has chiseled away at the individual freedoms of many Americans, and called for continued open conversation and accountability as the way to help fight what many consider unconstitutional spying.

Other programming in today’s 11th annual Day of Dialogue, sponsored by Hofstra’s Center for Civic Engagement, include a session on journalists and government leak investigations, featuring Pulitzer-Prize winning reporter Bob Keeler, as well as forums on the U.S. role in the Syrian crisis, voting rights, and development plans for the Nassau Hub.  There will also be a performance at the Spiegel Theater tonight; see the program for full details.