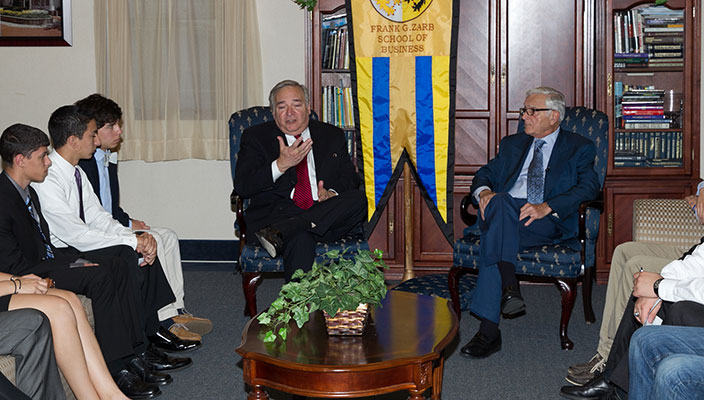 A group of high-achieving freshmen from the Frank G. Zarb School of Business got a chance to meet the man himself, who regaled them with stories of a career spent at the highest levels of Washington and Wall Street.

“You look at my bio and it looks like a guy who can’t keep a job,” Frank Zarb quipped to the 40 students in the Dean’s Business Scholars program. Zarb served in multiple cabinet positions for two presidents (Richard Nixon and Gerald Ford), ran the National Association of Securities Dealers and the NASDAQ Stock Market, was CEO and Chairman of Smith Barney and has chaired state commissions and boards on education reform and the redevelopment of Lower Manhattan.

“For me, a diversity of experience was important,” Zarb said. “I just found it was fun …and it really turned me on to move around and do many different things.”

During the hour-long conversation, Zarb discussed the government shutdown, the stability of the U.S. economy and his time serving in the Nixon and Ford administrations, including the day he sneaked into the Oval Office while Nixon was away and had his picture taken sitting at the Resolute Desk.

“A few months later, I was in the Oval Office and I showed the picture to the president,” Zarb said. “He looked at it … then he signed it: To my friend, Frank? – with a question mark. You look a little too comfortable in that chair.”