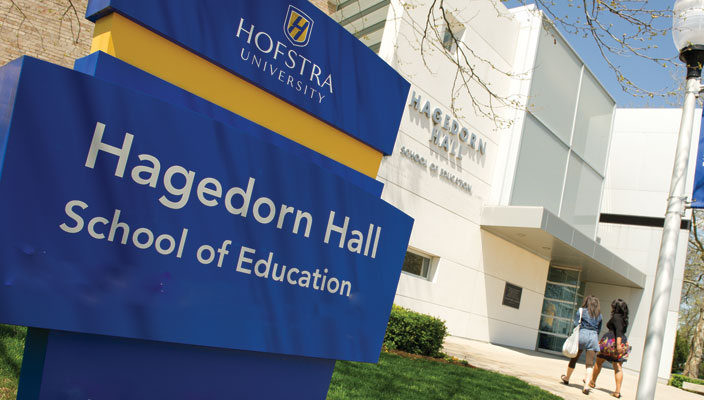 The United States Department of Education has awarded the Hofstra University’s Department of Special Education in the School of Education a grant of $1,246,740 to launch the Hofstra Early Childhood Intervention Specialist Program (HECIS) to train highly-qualified teachers who will serve the needs of pre-school age children (birth to 5 years) with disabilities. Up to now, Hofstra has offered an MSEd in Early Childhood Special Education and a separate Advanced Certificate in Applied Behavioral Analysis. The grant program certifies students in both areas in a two year period. Pursuing the MSEd and the Advanced Certificate separately can take up to three years.

The co-directors of the grant are Hofstra faculty members Stephen Hernandez, director of early childhood special education, and Diane Schwartz, professor of special education. Hofstra’s Department of Special Education will receive the grant money over a five year period ($250,000 for the 2013-2014 academic year). Sixty-five percent of the grant is intended for student scholarships, and remaining funds will be used toward program implementation, materials, technology and compensation for mentors and faculty support.

Dr. Hernandez said, “As a result of this grant, dozens of individuals who otherwise would not be able to pursue a graduate degree in special education will be able to acquire the skills necessary to serve the growing population of young children with developmental delays and disabilities.  As a former school administrator, I know the value of having special educators with the exceptional skills that scholars will acquire in this program.”

The HECIS program partners Hofstra with the Developmental Disabilities Institute (DDI) and the Genesis/Eden II Agency, which both offer services for young children with disabilities in multiple locations in New York City and Long Island.

The mission of HECIS is to improve learning outcomes for children with special needs and their families by increasing the number of graduates fully prepared to bring about improvements in educational and developmental services. By working in the programs offered by DDI and the Genesis/Eden II Agency, HECIS students will gain crucial hands-on experience. These future scholar-practitioners will be trained to meet the needs of all students, especially those with disabilities that may result in challenging and maladaptive social behaviors.

Dr. Schwartz said, “With the growing incidence of autism spectrum disorders and other behavioral disabilities in young children, we believe that this dual degree program sets the standard for high quality teacher preparation in early childhood special education.”

The United States Department of Labor (2009) has projected a 21.6% growth in the need for special educators serving young children between now and 2020. The US Bureau of Labor Statistics (2009) projects that more than 113,000 new special educators will be needed to serve the estimated 8.0% growth in student enrollment for grades Pre-K through 8 during that same time period.

HECIS is a two-year, six semester program. Students who receive scholarships through the grant will be required to provide four years of employment service to a high needs school in the United States.

It should be noted that Hofstra University has long been the model in providing support for students with disabilities, starting in the 1960s when it became the first campus in the nation to be 100 percent architecturally barrier free (under the leadership of the college’s then-Provost Harold Yuker, who was himself born with cerebral palsy). The late Dr. Frank Bowe, who served on the faculty of Hofstra’s Department of Special Education from 1989-2007, served as executive director of the American Coalition of Citizens with Disabilities from 1976 to 1981. He provided crucial direction during the nationwide sit-in regarding Section 504 of the Rehabilitation Act in 1977, the world’s first civil-rights provision for persons with disabilities, which eventually led to the American Disabilities Act, passed in 1990.

Religion Prof. Phyllis Zagano on the Role of Women in the Church
Do the Math: Hofstra’s IDEAS Institute presents “X and the City: ‘Arithmetic’ Applied to Urban Life”