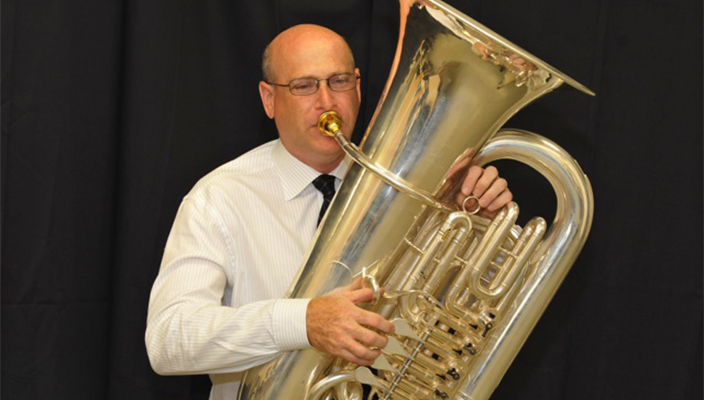 Michael Salzman, adjunct associate professor of music, is director of Hofstra’s Tuba and Euphonium Ensemble, which performs two concerts every academic year. The Ensemble performs original music for tubas and euphoniums as well as transcriptions of music from all periods.

Professor Salzman was a student and longtime friend of the late Harvey Phillips, called the “Titan of Tuba” by The New York Times and highly regarded as one of the most important instrumentalists of our time. Mr. Phillips is credited for starting Octubafest, a concert tradition at many universities and communities around the country, including Hofstra.

This year’s OcTubafest, directed by Professor Salzman, will take place on Saturday, October 26, 2013, at 7:30 p.m. at The Helene Fortunoff Theater at Monroe Lecture Center. Admission to the concert is free. For more information call the Music Department at 516-463-5490.

I started playing the tuba in the 5th grade.  I was fascinated by its size and quickly began to love its sound. I’ve been teaching tuba since I was in high school, and I’ve been doing so at Hofstra since 1994.

What first attracted you to the instrument? What do you love about it that has kept you dedicated to teaching and playing tuba it for so long?

The tuba is a beautiful sounding instrument. Its deep resonant tone is similar to that of the bass voice, rich and robust.  It’s difficult to explain, but playing the tuba brings me, and most tuba players, an enormous amount of pleasure.  My students laugh, but they have come to expect me to say “I really love playing the tuba” just about every time I pick it up.  It’s actually very rare to find a tuba player who doesn’t feel the same way.

Are there any particular qualities that are common among tuba players? Is there a tuba player type?

The stereotype is the big fat male, but just like tubas themselves, tuba players also come in all different shapes and sizes.  Male, female, tall, short, skinny or robust, I’ve seen (and taught) them all.  My current studio ranges from 5 feet, 105 lbs to 6’4″ 320, male and female.  We are a diverse group.  It does take a lot of air to play the tuba, but maximizing ones air stream is something I teach and something we all work hard on. It does not have to be something you are born with.  All you need is a passion for playing the instrument, the rest can be learned.

Why do you think the tuba, despite its size, is so underappreciated?

The tuba has long been underappreciated.  It has a reputation of only being a background instrument with little melodic abilities.  In reality, the only limitations of any instrument are those of the performer, not the instrument. The tuba has the largest range of any instrument in the orchestra, more than half the range of the piano, and a good player can use that range to carry a beautiful melody or an extremely technical passage.  My teacher and mentor, the late Harvey Phillips, said this:  “Had Yitzhak Perlman, Arthur Rubinstein, or Pablo Casals been tuba players, they would have had the same musical intellect and been able to perform with the same virtuosity, they just wouldn’t have had the wealth of great literature or the public acceptance that is enjoyed by the violin, piano or cello.”  He started OcTubafest in 1972 as a vehicle to showcase the instrument and the works of the great composers who have written for it.  Today there are OcTubafests taking place on more than 250 college campuses around the country, and many more around the globe.  Harvey Phillips would be very pleased.

Are there any little known facts about the tuba that you think would surprise people?

The tuba was invented in 1835 after the death of such great composers as Bach, Mozart and Beethoven.  This is why we play so many transcriptions of their music.  I often think about how wonderful Mozart’s tuba concertos would have been.  He had such a great sense of humor and his horn concertos are so wonderful, that I know he would have had a great time writing for the tuba had it been invented before his death.

Tubas come in many different shapes and sizes.  The tenor tuba, commonly known as the euphonium, is an octave higher than the standard BBb tuba.  Bass tubas come in keys of Bb, C, Eb and F.  The Sousaphone was invented by the tuba players in Sousa’s band who needed their tubas in a shape that would make it easier to play while standing.  They named it after their esteemed band leader.

You coordinate a tuba performance at Rockefeller Center every winter. How did that come about and will Hofstra be participating?

TubaChristmas is another one of Harvey Phillips’ creations, designed to bring public awareness to the beautiful sounds of our instrument. More than 500 will take place around the world this year.  I have taken on the responsibility of coordinating the New York City event which will take place on Sunday, December 12, 2013.  Student members from the Bill Barber Memorial Chapter of the International Tuba Euphonium Association at Hofstra will assist with the process of registering the 500 plus players who will join us on the ice skating rink at Rockefeller Plaza.  Bill Barber was another former teacher of mine and a well-regarded tuba teacher on Long Island. 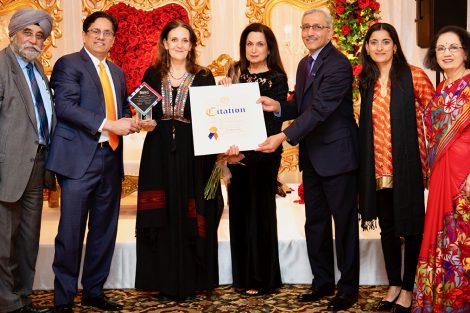