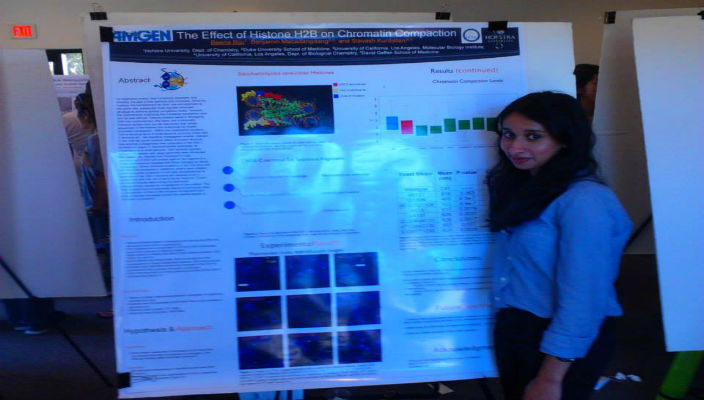 The national Amgen Scholars Program, now in its seventh year, allows undergraduates to participate in important research projects and conduct hands-on laboratory work, under the mentorship of scientists at 13 leading institutions in the U.S. and Europe.   Biju was one of 255 U.S. students selected among 3,640 applicants nationwide for the fully-funded opportunity.

At UCLA, Biju worked in the lab of Siavash Kurdistani, MD, associate professor in the Department of Biological Chemistry at the David Geffen School of Medicine.   Dr. Kurdistani studies the relationship between human genome compaction and diseases such as cancer.

“Beena was a joy to have in my lab this past summer.  She came in with a strong scientific background which allowed her to understand and implement new concepts easily,” said Dr. Kurdistani.  “She was able to take on a challenging technique and produce valuable data to push the project forward.  My hope is that she continues to do scientific research as she pursues a career in science, medicine or both.”

As part of the program, Biju also attended the annual Amgen Scholars U.S. Symposium  where students learn more about biotechnology and drug discovery and development, meet other Amgen scholars, and also hear from top scientists in industry and academia.

At Hofstra, Biju, a biochemistry major from Elmont, NY, hones her skills in the lab of Assistant Professor Scott Lefurgy, PhD, who studies the mechanism of bacterial antibiotic resistance.  Dr. Lefurgy’s research in the Chemistry Department focuses on beta-lactamase enzymes, which protect bacteria by inactivating antibiotics such as penicillin.

She is the third Hofstra student to be named an Amgen scholar.  Past recipients Cindy Schmelkin is now at Harvard Medical School and Courtney Grimes is in the PhD program in Chemistry at the University of Maryland.