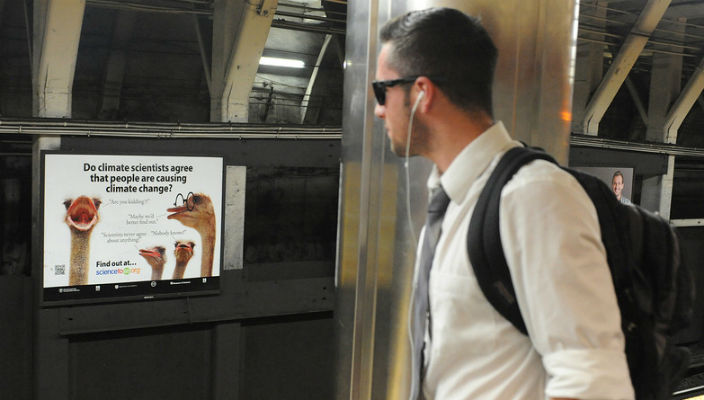 A marketing professor, whose expertise is in advertising that targets consumers outside their homes, is part of a $2.2 million National Science Foundation-funded project to educate Boston commuters about climate change using subway ads.

Dr. Rick Wilson, a professor in the Frank G. Zarb School of Business who has studied the effectiveness of out-of-home, or what is traditionally referred to as outdoor advertising, helped design and develop the ads and the survey used to evaluate how they affect commuters’ attitudes about climate change.

The 14-month campaign, which launched last week, is the work of a coalition called ScienceToGo.org, a team of educators, researchers and communications experts from Hofstra, the University of Massachusetts at Lowell, UMass Boston, the Museum of Science in Boston, Goodman Research Group and the Massachusetts Bay Transportation Authority (MBTA), which donated the ad space.

The campaign features a flock of ostriches who, instead of keeping their heads in the sand, share insights about climate change.  The first ad asks the question “Do climate scientists agree that people are causing climate change?” and directs commuters to go to the organization website. The website offers additional information about climate change.

“The subway provides an interesting context to educate Bostonians about climate change or any other topic,” Wilson said. “Subway riders represent a captive audience, and many people in that environment welcome the distraction that advertising provides.” Our ads have to be creative and stand out in that space.”

The star of the ads – a character called Ozzie the Ostrich – goes through an evolution in his thinking about climate change over the course of the campaign. At the beginning, he is skeptical but eventually becomes convinced about the impact of climate change.

Wilson said the coalition hopes to see a similar change among Boston commuters.“Ozzie is being educated along the way. He represents the average person.”

So, too did Wilson, who, as a non-scientist, provided the coalition with the perspective of the target audience as it crafted the messaging for the campaign.

“I was the civilian in the group,” Wilson said. “I don’t have any more knowledge of climate change  than the average person does so that allowed me to be the one who said ‘I just don’t get it’ or ‘it doesn’t’ resonate’ or ‘it’s too insider.’”