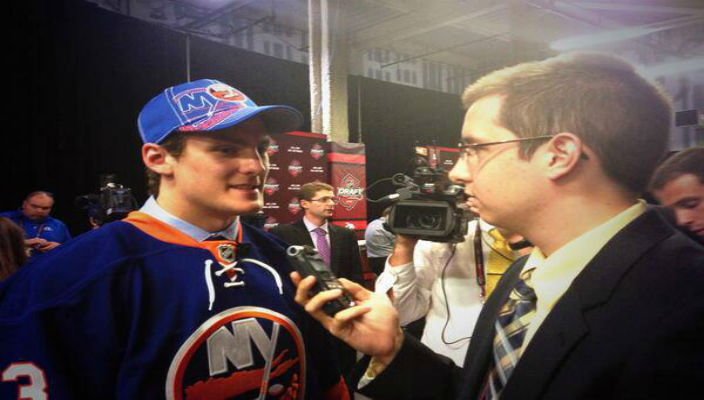 For a fourth year in a row, WRHU 88.7 FM Radio Hofstra University has exclusive rights to broadcast all New York Islanders games through the 2013-14 National Hockey League season.

Hofstra students will once again serve as color commentators, sideline reporters and update anchors on all 82 games as well as playoffs throughout the season, under the guidance of Hofstra Professional-in-Residence Ed Ingles and Operations Manager John Mullen.  Islanders radio veteran Chris King will continue in the play-by-play position.   Typically about 20 students are involved in each broadcast, including doing vital behind-the-scenes work in production and engineering.

WRHU, a component of the Lawrence Herbert School of Communication, is the only college radio station in the country to serve as the flagship station of a professional sports franchise, noted Mullen.   The station’s partnership with the Islanders extended into the post-season earlier this year when the Islanders made the playoffs for the first time since the 2006-07 season.  Hofstra student broadcasters were praised for their on-air performance during those games.

The Islanders play their first game of the season against the New Jersey Devils tonight at 7 pm. before returning to Nassau Coliseum for the home opener tomorrow against the Columbus Blue Jackets.   Hofstra student Rob Joyce, pictured above interviewing player Ryan Pulock during June’s NHL draft, will be the color analyst at tonight’s game for WRHU FM.