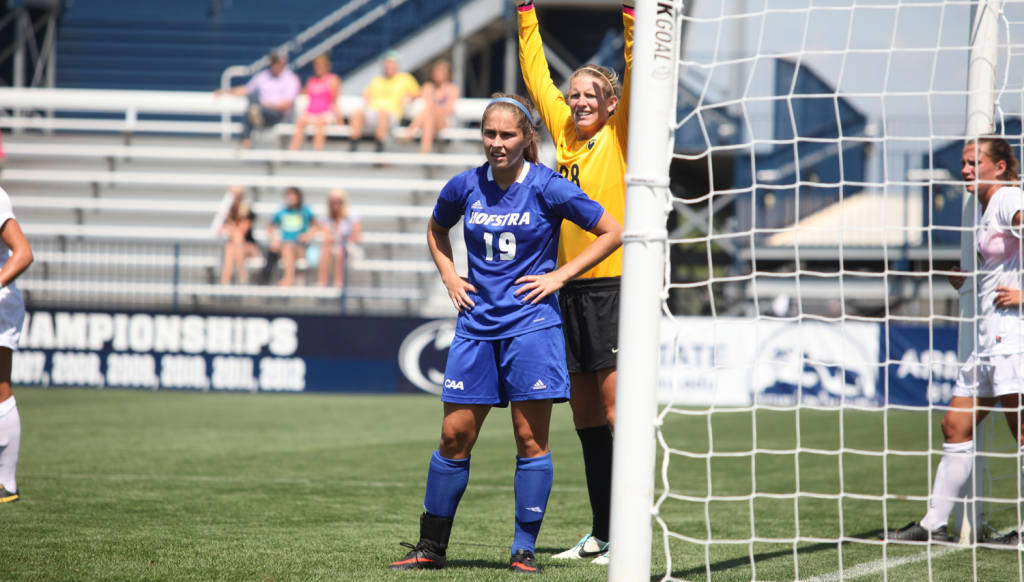 Pressure didn’t prevent her from coming through in the biggest game of the year: her double-overtime right-to-left goal in the title game over UNC Wilmington sent Hofstra to its fourth-ever NCAA Tournament appearance.

So, it’s not a surprise that she would seek a profession that comes with scrutiny. After beating a goalkeeper one-on-one a few times, embracing the spotlights in Studio 1A at 10 Rockefeller Center does not seem to be as daunting of a task.

“My dream job would be working on the Today Show,” said Scolarici, who is a journalism major in Hofstra’s Lawrence Herbert School of Communication. “I’ve watched it ever since I was little. But I’d also like to do sports broadcasting or entertainment.”

Before settling in behind a microphone, Scolarici has found a comfort zone in front of opposing nets in her junior year. The Aldie, Va. native is tied for the CAA lead with eight goals and second with 17 points through the season’s first eight games. She already is just two goals away from trying a career high set last season and her 23 career goals are seventh on the program’s all-time list.

Scolarici and sophomore Leah Galton have combined for 12 of Hofstra’s 23 total goals this season. The duo became just the second Hofstra tandem to both eclipse double-digit goals in the same season in 2012. The pair has set the bar even higher thanks to the return of Amber Stobbs, who was sidelined for most of last season but is now back and helping to prevent defenses from keying on any one attacker.

“Amber’s speed and technical skill is great and it adds so much to our offense,” Scolarici said.  “Every game, she’s flying down the sideline beating defenders and getting crosses and shots.”

Scolarici started last season on a tear with five goals through the first five games. With Stobbs, sophomoreJeannine Molleda and Galton also providing an offensive spark, Hofstra has scored 12 goals in the last four games.

“We’re hoping she can be this consistent throughout the season,” Hofstra Head Coach Simon Riddiough said. “Having Leah and Amber on each side allows her more freedom. The defense has to pay attention to everyone and Sam can sneak inside and take advantage. All three have been doing a tremendous job.”

Hofstra won the league title with a young team that returned all of its top-10 leading scorers last season.  Scolarici said the team wasn’t surprised to win a championship with just one senior in the starting lineup in 2012, but the team peaked at the right time and will look to parlay that title-winning pedigree into the current season that has seen Hofstra score five-or-more goals twice while shutting out three opponents.

“We’ve been connecting well as a team and a lot of selfless decisions has helped,” Scolarici said.  “Everyone’s willing to make the extra pass and create chances.  It was early for us to win it last year. Not that we didn’t have the skill, but there [might have been questions] about the maturity level. Now, we know what it takes to win and we’re just trying to get better.

“We’ve worked harder in preseason and pushed each other more. We know we have a target on our backs. We want to win it again because we know we have the team to do it.  It’s almost the same team but we’ve made adjustments and our front-six is creating so many chances.”

Galton has built on her CAA Rookie of the Year campaign. The league’s Preseason Player of the Year has posted four goals and 14 points with assists on five of Scolarici’s goals. The NSCAA all-region selection has crafted a similar philosophy to the old Edmonton Oilers top line with Galton feeding passes like Wayne Gretzky and Scolarici finishing chances like Jari Kurri.

“She was amazing from the start,” Scolarici said. “Now, we know each other more as players. I trust her with the ball no matter what.”

Galton credits Scolarici’s conditioning coming into the new campaign for her fast start and said the team’s league-leading totals in goals and shots continues to generate confidence.

“Our time together last year helped us connect,” Galton said. “It’s been incredible. Sam arrived in unbelievable shape and ready to score and we need that to keep going.

“Someone finds a way to step up every game. Simon always tells us we can have the strongest offense in the conference, and I totally agree with that.”

As a student-athlete, Scolarici has been managing her time among the pitch, the classroom, and the on-campus radio station, WRHU. Scolarici is a member of the station’s fall training class and is looking to follow the lead of Hofstra baseball player Cody Normand and balance her role as a Hofstra athlete with that of a WRHU broadcaster. Scolarici credited Hofstra associate professor Joseph Peyronnin with helping her in her journalism studies.

“Samantha approaches her studies with the same energy and passion she displays on the pitch,” Peyronnin said. “She is always fully engaged in class, well prepared and goal oriented.

“Samantha completes her assignments with flair, imagination and a high level of professionalism, while consistently exuding a positive attitude.”