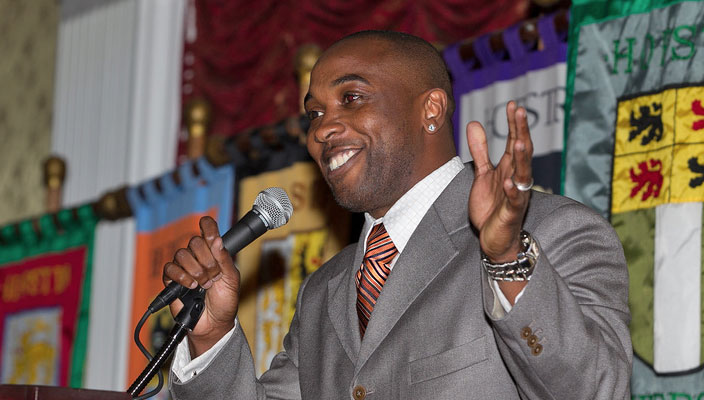 Tickets are $150 per person; undergraduate alumni from the past decade may attend for $125.  To make a reservation visit www.hofstra.edu/alumniawardsdinner or contact Jessica Foglietta, special events coordinator in the Office for Development and Alumni Affairs, at (516) 463-5284 or Jessica.Foglietta@hofstra.edu.

The eight distinguished individuals to be honored by Hofstra are:

Alumnus of the Year

Joseph G. Shapiro ’54, chairman and CEO, Commander Enterprises, received his B.B.A. degree from Hofstra University where he was also a member of Epsilon Sigma fraternity. He served in the United States Army and saw active duty in Korea and has held numerous business and professional affiliations during his career. These have included: Director of Fleet Bank, Director of the Long Island Association, Oil Heat Institute of Long Island, Chairman of the Long Island Heart Council and American Heart Association, former Chairman of the Glen Cove Zoning Board of Appeals, New York State Joint Legislative Committee of Environmental Management of Natural Resources, a Board Member of the Broward Sheriffs Advisory Council, and a member of the Royal Knights of Chivalry for Cancer Research.

Mr. Shapiro and his wife Libby ’54 established the Libby and Joseph Shapiro Endowed Distinguished Academic Scholarship and the Eva and Benjamin Shapiro Memorial Scholarship at Hofstra University. They have also created the Joseph and Libby Shapiro Family Foundation, which generously donates to educational, religious, health and civic institutions and organizations.

Wilbur Breslin, president, Breslin Realty Development Corp., has developed real estate with the vision of a socially conscious and financially successful entrepreneur. Breslin Realty, a full service, comprehensive real estate development company with experience in construction, land planning, real estate appraising, brokerage, tenant negotiations, property management and creative financing, has grown from a single-person brokerage business to a dynamic real estate development firm. The growth of the company and its emergence as a real estate leader can be traced to, and parallels, the explosive growth that took place on Long Island during the past four decades. In addition to Breslin’s primary activities on Long Island, the growth of the company in terms of personnel and experience has facilitated the expansion of its real estate activities over an extensive geographic area.

Mr. Breslin is a trustee emeritus of Hofstra’s Board of Trustees, and during his tenure on the Board, he served as chair of the University’s capital campaign – which raised more than $30 million – from 1989 to 1992. Mr. Breslin continues to play an active role in the progress of the University through his support and guidance on significant initiatives. Breslin Hall, one of Hofstra’s largest academic buildings, is named for Mr. Breslin in honor of his service and generosity toward the University. In 2007 Hofstra established the Wilbur F. Breslin Center for Real Estate Studies, which offers academic and professional programs, seminars and conferences.

Noel Thompson has sat on the Board of The Hofstra Pride Club since 2009. Additionally he currently serves on the board of governors for the National Wrestling Hall of Fame in Stillwater, Oklahoma, and Beat the Streets in New York City. He is the wrestling team leader for the U.S. Women’s Freestyle team participating in the 2016 Olympics in Rio. He also sits on the Committee for Preservation of Olympic Wrestling (CPOW).

Mr. Thompson graduated from Hofstra with a degree in marketing. He wrestled for four years and was a three-time team captain.

Celia Berk ’79, chief talent officer, Young & Rubicam Group, works in close partnership with the company’s leaders to attract, develop and retain the best talent and promote collaboration across a global network comprising some of the most powerful brands in marketing communications. Ms. Berk joined Young & Rubicam Group from Burson-Marsteller, a preeminent global public relations firm. She held the position of managing director, human resources worldwide, there for more than 10 years. She holds a Bachelor of Fine Arts from Hofstra University and serves on the school’s Women in Leadership initiative. She is a founding member of the Advisory Council of the National Executive Service Corps, and sits on the global advisory board for the Future of Advertising Project, SEI Center for Advanced Studies in Management, The Wharton School. She also supports philanthropic ventures as a trustee of the Nina Abrams Fund.

Craig “Speedy” Claxton ’00, special assistant to the head coach, Men’s Basketball, Hofstra University, and a 2003 National Basketball Association champion, received a scholarship to attend Hofstra University after graduating from Christ the King High School in 1996.  Mr. Claxton guided the team to an NCAA tournament during his senior year. Shortly after, he was drafted in the first round by the Philadelphia 76ers. He continued on to have a 10-year professional basketball career, which included winning a championship in 2003 with the San Antonio Spurs. Craig Claxton has spent the last three years as a college basketball scout for the Golden State Warriors. He is now a special assistant to the head basketball coach at Hofstra University.

Stella M. Mendes ’09, president, First National Bank of New York, has been in the financial industry for more than 25 years. Prior to becoming president, Ms. Mendes served as executive vice president and chief retail banking officer for Madison Bank that was acquired by First National Bank of New York. She was one of the principal architects of both the retail franchise and brand, and is an inaugural member of the executive management team. As president of First National, Ms. Mendes is responsible for all day-to-day management of the organization. She is on the board of the Madison National Foundation and Education & Assistance Corporation (EAC). She is also a member of Hofstra’s Women in Leadership and the New York Banker’s Association (NYBA) Retail Executive Committee.

Dr. Robert W. Motta ’73,’75 is professor of psychology and director of Hofstra University’s Doctoral Program in School-Community Psychology. After obtaining a B.A. in psychology from Northeastern University, Dr. Motta served in the Army’s First Air Cavalry Division in Vietnam. While in Vietnam he was accepted to Hofstra’s Psychology Doctoral Program and obtained a Ph.D. in 1975. While in the doctoral program he began teaching psychology students, and has continued doing so for 40 years. He is the founder and director of the Psy.D. Doctoral Program in School-Community Psychology at Hofstra and is a former chairperson of the Psychology Department. The Psy.D. Program has received the American Psychological Association’s highest level of accreditation. He is a licensed psychologist and is board certified in cognitive-behavioral psychology from the American Psychological Association. Dr. Motta has published approximately 100 refereed journal articles and book chapters on topics dealing primarily with post-traumatic stress disorder and childhood adjustment disorders.

Edward G. Watson ’89 is principal at Peconic Lane Advisory, Inc., and senior advisor at Worldwide Capital Advisory Partners, LLC. He has 30 years of financial services experience has served as a senior executive in firms such as Fannie Mae, Citigroup, Republic NY Securities and BNY Mellon. In his many years at Citigroup and its legacy companies, Mr. Watson built OTC Derivatives Trading capabilities, established a Structured Products Distribution and Trading business. Upon Fannie Mae entering conservatorship during the housing finance crisis, Mr. Watson joined the new Fannie Mae management team, as executive vice president and head of operations, Technology and General Services based in Washington DC. He lead the efforts to stabilize the company, streamline the infrastructure, establish critical risk functions such as Information Security, Business Continuity and Disaster Recovery while building new capabilities required for the future of the housing finance industry. Mr. Watson holds an M.B.A. from Hofstra University and is a founding member and was the first president of Hofstra’s Zarb School of Business Alumni Association and has been a guest lecturer at the graduate level.