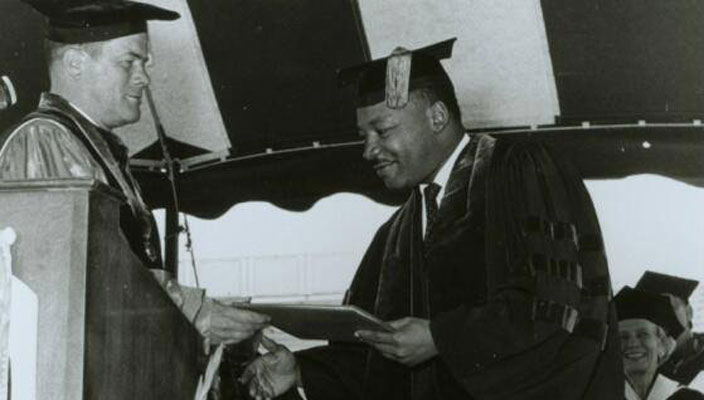 Today marks the 50th anniversary of Dr. Martin Luther King Jr’s “I Have a Dream” speech, his historic call to end racism and a defining moment of the civil rights movement in the United States. Two years later, in 1965, Dr. King came to Hofstra University, where he accepted an honorary Doctor of Divinity degree. We asked members of the Hofstra community to reflect on the impact of the speech and Dr. King’s legacy over the last five decades.

Growing up, it was something I was constantly reminded of; if it wasn’t for this one man and the thousands who marched on Washington, I might be living in a different world right now. Who knows if I’d be attending college here? Segregated schools were a thing not that long ago. The speech has had a big impact on me, and reminds me that if you want to accomplish something, you need to grab the world’s attention.

Dr. Martin Luther King, Jr.’s “I Have a Dream Speech” was a clarion call to all of us that equality and freedom – the bedrock principles our country were founded upon – were more than words on a page, that they were values we all must live by, every day. Fifty years later, as we reflect on how far we have come as a nation, Dr. King’s speech resonates as profoundly as it did then.

There was a diversity session during orientation, and I was curious why we needed it because growing up in Miami, there was always a good mix of all races so I never had difficulty communicating with someone who was different from me. But I can see how there are still people and places that need to catch up. People have made pretty big strides; we evolve constantly in how we treat each other and accept each other. Both Dr. King’s presence and his speech were catalysts toward this change.

I was a student at the City College and listened to the speech with a group of friends, and we were all mesmerized. The speech eloquently articulated the goals and aspirations we all had for our country. The March on Washington and Dr. King’s address were pivotal moments in the civil rights struggle and we were all better off as a result of Dr. King’s inspired words.

I think everything Dr. King said and did has been a beacon of light for future generations who have been passionate about equality and justice, themes that everyone cares about. I think it’s had a huge trickle-down effect, not only in terms of racial rights but also LGBTQ issues. It’s still progressing, but it’s all been one big ripple effect.

I was in junior high school in 1963, and as I got older I grew more and more aware of the significance of the “I Have a Dream” speech and what Martin Luther King represented. I actually marched with Dr. King in December 1967 to protest the Vietnam War – he was at the front of the line; I was at the back. And I participated in the 20th anniversary celebration of the speech in 1983. He inspired me to become deeply involved in community service and to work for social justice for all people.

I was a student in New York at the time, and I remember my parents and even my grandmother had us all listen to it. It still gives you goosebumps when you think about it. No one knew what the occasion was going to turn out to be. There was some concern that there would be a riot, but when the March occurred and Dr. King spoke, everyone was glued to that. That speech has lasted the test of time. It was something that at the time brought blacks and whites together, but after Dr. King’s death, people looked at the speech in another way and a larger group of people began to own it and realize how important it was for us. I don’t think we have come as far as Dr. King’s dream would have us come; we’re still a long way from that, but he set a tone that I think was a milestone for the country.

I think the speech shows us how we have evolved. In the past, blacks and whites didn’t talk to each other, didn’t interact, and I feel that he created that bridge. He set a stepping stone for everyone to learn to live with each other. There is still racism, but he played a major role in fighting it. The fact that he has a statue in Washington, D.C. pretty much shows how much of an impact he’s had.

Meena Bose
Professor of Political Science and Director, Peter S. Kalikow Center for the Study of the American Presidency

Fifty years later, Martin Luther King’s “I Have a Dream” speech continues to inspire and instruct.  It reminds us of all that the United States has achieved in freedom, equality of opportunity, and civil rights, and how much we still have to do.  What would Dr. King say in a speech today?  As we reflect on his words, along with recollections from people who were at the National Mall that day, thinking about which remarks would change and which would stay the same may provide a guide for making the dream a reality in the twenty-first century.

It’s been 50 years, but he’s talking about something that is so relevant to us right now. It set such a beautiful benchmark for what we should all strive for. On the one hand, it’s a little upsetting that today we can’t take it as a given; we’ve made tremendous strides but there’s still plenty of work to be done. As a clergyman, I am proud that the different faith communities worked together with him. He set a wonderful precedent.

What Dr. King tried to do had a great impact on our country. It was an incredible speech; I’ve read it and heard it several times through my school years. It was such a huge moment in history.

When I think of the importance of Rev. Martin Luther King’s speech today, I am moved by the current application of his phrase, “the fierce urgency of now” and the importance of taking political action now, in 2013, against continued and renewed racial discrimination and socioeconomic inequities.
Dr. King inspired listeners with his powerful words, to make their voices and bodies and votes count—by protesting, marching, sitting in, and engaging in embodied acts nonviolent resistance. While he got his audience to visualize his dream of a country free of prejudice and poverty – this was after all a march for jobs and freedom—King did not only articulate the ‘dream’—he implored listeners to take action now, resisting what King called “the tranquilizing drug of gradualism.”

Fifty years ago, among other things, King spoke out about voter suppression, and now that the Supreme Court has eviscerated the Voting Rights Act, it is more important than ever that people both remember MLK’s message, and like the courageous Freedom Riders and Freedom Summer workers the following year, refuse to have our political voice silenced and anyone’s right to vote suppressed or denied.

Together with President Kennedy’s civil rights speech in June 1963, Dr. King’s great oration before the largest group of demonstrators in American history gave impetus to all of us.  Dr. King had been to Long Island in the year prior to the March on Washington. With the encouragement of Dean Joseph Astman [founder of the Hofstra Cultural Center] we had been doing “Teach-Ins” on civil rights issues since 1961, first only for the faculty, then involving students as well.  Joe Astman also formed a committee to incorporate race themes in our curriculum and to attract more professors and students of color.   All of these developments continued to be spurred by Dr. King’s passion and eloquence. It was no surprise for us that he became Hofstra’s graduation speaker in 1965, shortly after he received the Nobel Peace Prize.

On August 28, 1963, Martin Luther King, Jr. delivered his famous “I have a dream” speech in front of the Lincoln Memorial. Fifty years later, it’s worth thinking about what children should know, beyond the memorable lines from the iconic speech, about struggles for equality and justice in America.

It’s no accident that the speech was delivered at the Lincoln Memorial, as King reminded Americans that, on the one hundredth anniversary of the Emancipation Proclamation, there was much work yet to be done on racial equality in America, work that would require the force of the federal government. Indeed, the speech made Congress and the President move faster on the Civil Rights Act, which passed the following year in 1964. But it is also possible to focus too much on the one speech and miss the importance of the courageous work of thousands that led up to and followed the speech. Presidents don’t tend to take stands in opposition to entrenched powers without extensive pressure from the populace.

In addition, it is worthwhile to examine the linkages between the problems of prejudice and discrimination that King spoke of in the 1963 speech, and the triple evils of Racism, Poverty and Militarism that he began to speak of two years later. As relevant as King’s words 50 years ago today are his words at Riverside Church in New York, on April 4, 1967, exactly one year before his assassination in Memphis: “A nation that continues year after year to spend more money on military defense than on programs of social uplift is approaching spiritual death.”

It’s important for us, as teachers, to eschew a facile “What’s your dream?” approach and examine lesser-known parts of the speech, later speeches, other defenders of justice – well-known and lesser-known, as well as a variety of perspectives on the nature of justice. 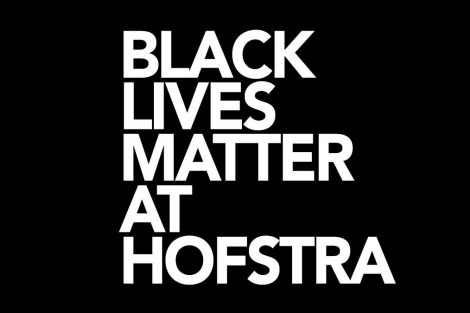 Black Lives Matter: A Message from the President, Provost and Chief Diversity and Inclusion Officer