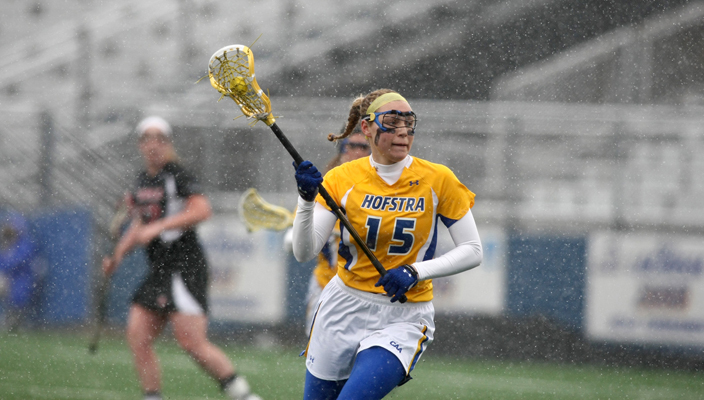 The Hofstra Women’s Lacrosse team continued its stellar showing in the classroom as the Pride was honored with several academic accolades from the Intercollegiate Women’s Lacrosse Coaches Association (IWLCA), including graduated senior Jill Maier being named the Division I Scholar-Athlete of the Year.

In addition to Maier’s prestigious accolade, Hofstra’s first-ever honoree in that category, the women’s lacrosse program was also named an Academic Squad by the IWLCA and six student-athletes received recognition as members of the Academic Honor Roll.

To be named a Academic Squad by the IWLCA a team must have a cumulative grade point average of at least a 3.0.

The six honorees on the Academic Honor Roll are the most for the Pride since the 2010 squad had seven student-athletes named to the team.

Maier, a midfielder from Honeoye Falls, NY, was named to the Provost’s List, Dean’s List and Colonial Athletic Association Commissioner’s Academic Honor Roll in 2013. As a senior, Maier carried a double major in English with a concentration in American Literature and Early Childhood and Childhood Education. Maier has been a member of the Provost’s List six times during her undergraduate career and a member of the Dean’s List on multiple occasions. In addition, Maier was the 2012 and 2013 Colonial Athletic Association (CAA) Scholar-Athlete of the Year in women’s lacrosse.

The Academic Honor Roll award for Maier was her second straight and following the 2011-12 academic year, she received the Sylvia Giallombardo Female Scholar Athlete Award as Hofstra’s top female scholar-athlete. On the field, Maier scored 15 goals and had 27 draw controls in 2013 despite being limited to 10 games due to injury. She finished her career with 96 goals, 112 points and 128 draw controls. She was a first-team All-CAA honoree in 2011.

Hofstra finished the 2013 campaign with a record of 11-8 and advanced to the CAA Championship game for fifth time overall and the first since 2010. The Pride’s 11 wins this season were the most since the 2010 squad won 12 games.