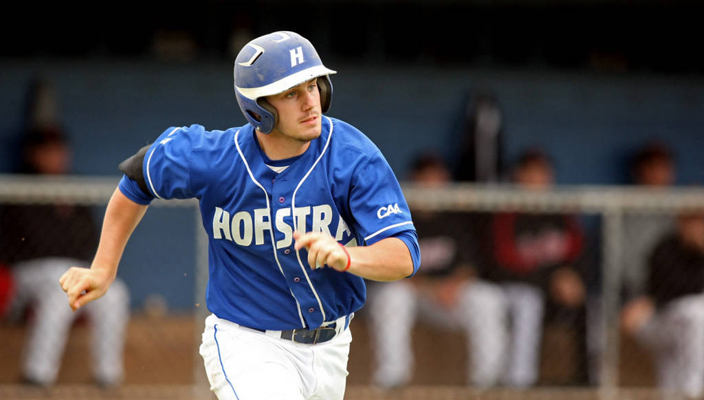 Hofstra University catcher Matt Reistetter has signed a free agent contract with the Washington Nationals and will report to the team’s spring training facility in Florida before joining the Auburn (NY) Doubledays (Class A Short Season) of the New York-Penn League.

“This is a dream come true for me,” said Reistetter. “I have always wanted the opportunity to play professional and while it is difficult to leave Hofstra, I felt that I could not pass up this chance. I will always be grateful for my coaches and teammates at Hofstra and without them I probably would not be in this position. I also want to thank the Washington Nationals organization for this opportunity and I look forward to starting my professional career.”

The Hauppauge, New York, native led the Pride in batting in 2013 with a .326 average. The junior started 47 of Hofstra’s 53 games and posted 58 hits, 10 doubles, one triple, two home runs, 25 runs and 34 RBIs. He also added six stolen bases. He set career-highs in batting, hits, doubles, home runs, RBIs and steals. Defensively, he posted a .986 fielding percentage and threw out nearly 40 percent of would-be base stealers (17 of 43).

This is just the latest of a list of accomplishments for Reistetter during 2013. He was named to the American Baseball Coaches Association (ABCA)/Rawlings All-East Region second team as well as earning a spot on the All-Colonial Athletic Association first team. Additionally, he was nominated for the Johnny Bench Award, which is awarded to the top catcher in Division I, and also for the Gregg Olson Award, which goes to the Breakout Player of the Year in college baseball.

Reistetter leaves the Pride with a career batting average of .296 in three seasons. While starting 123 of the 127 games he played in, he recorded 131 hits, 21 doubles, three triples, two home runs, 64 runs, and 66 RBIs. Defensively, Reistetter posted a career .981 fielding percentage.

During his tenure at Hofstra, Reistetter earned a spot on an All-Colonial Athletic Association team each year, improving every season. He was named to the third team as a freshman, the second team as a sophomore, and finally the first team this past season.

Reistetter is the second member of the 2013 team to join the professional ranks, joining Bryan Verbitsky (third round draft choice of San Diego), and the fourth in the last two years. Danny Poma was a 10th round selection of the Arizona Diamondbacks in 2012 and Kevin Flynn, also a member of the Class of 2012, signed a free agent contract this past April with the Nationals as well.