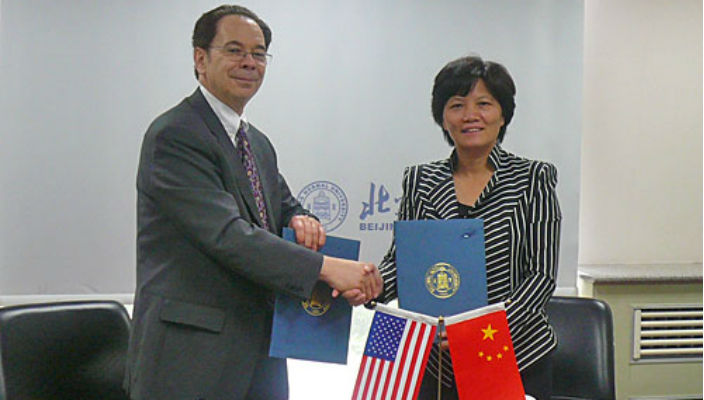 Hofstra University is launching academic partnerships with three leading Chinese universities that will include student exchange and dual degree programs to improve the institutions’ international reach and better prepare students on both continents to succeed in a global economy.

The agreements with Xi’an Jiaotong University (XJTU), Beijing Normal University (BNU) and Xi’an International Studies University (XISU), were the result of a week-long trip to China by Hofstra officials earlier this month and come just weeks after Hofstra announced a similar partnership with Changwon National University (CWNU) in South Korea.

“Because universities form part of a global knowledge and research community, Hofstra and its academic partners in China can play leadership roles in promoting the kind of cooperation between the United States and China that is essential to economic progress in the twenty-first century,” said Hofstra President Stuart Rabinowitz, who commissioned the trip to China. “We welcome the opportunity to work with these universities in a number of mutually beneficial projects.”

The exchange student agreement allows each university to send as many as three students for up to a full academic year to a partner institution, with participating students’ tuition and other applicable fees paid to their home university.

The universities also signed articulation agreements that permit Chinese business economics students to spend their final two years at Hofstra, earning degrees from their home institution and Hofstra. There is also a provision for a five-year dual degree program in industrial/organizational psychology (Chinese bachelor’s degree/Hofstra master’s degree) in which Chinese students spend three years at their home university and two years at Hofstra. 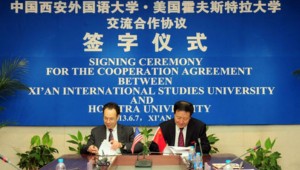 The Hofstra delegation included Herman Berliner, provost and senior vice president for academic affairs, Dean Bernard Firestone of Hofstra College for Liberal Arts and Sciences, and Dr. Ying Qiu, Director of the Asia Center. During their trip, they also visited other partner universities and a research institute, including China Renmin (People’s) University, Hainan University, National Institute for South China Sea Studies (NISCSS) and Qiongzhou University in Beijing, Haikou and Sanya. The delegates explored collaborative teaching, research, and exchange opportunities as well as recruitment of talented students from China to Hofstra.

“The U.S.-China relationship will shape the 21st Century,” Provost Berliner said. “The need for Americans to gain greater exposure to and understanding of China is clear. We need to prepare our students with a global vision. Both Hofstra and our Chinese partners are rising and ambitious universities that have a global vision, so it makes sense for us to build such connections.”

Founded in 1896, Xi’an Jiaotong University, regarded as one of China’s nine “Ivy League” universities, is one of the country’s oldest institutions of higher learning, with about 30,000 full-time students located in the ancient Chinese capital city of Xi’an, the starting point of the ancient silk road and home to the terracotta warriors and horses, one of the eight wonders of the ancient world.

“The partnership will help our students to have a better understanding of China and USA, two of the most important countries in the world, as well as develop (in students) a global perspective,” said Wang Jianhua, chairman of the XJTU Council. “The exchange students agreement and articulation agreement will serve as start of concrete and meaningful cooperation between the universities.”

Beijing Normal University, established in 1902 with about 22,000 students, is acknowledged as one of the nation’s top ten universities, renowned for teacher education, science education, and basic learning in both the arts and the sciences.

“The partnership will help our students to have a better understanding of China and USA, two of the most important countries in the world, as well as develop (in students) a global perspective,” said Wang Jianhua, chairman of the XJTU Council. “The exchange students agreement and articulation agreement will serve as start of concrete and meaningful cooperation between the universities.”