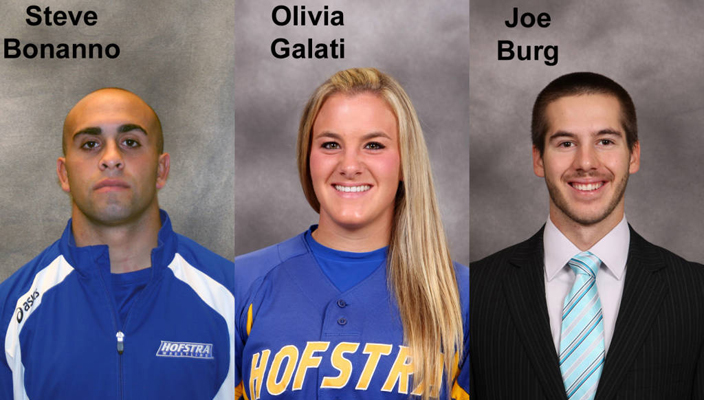 Seniors Joe Burg (baseball), Jill Maier (women’s lacrosse) and Olivia Galati (softball) were named the top scholar-athlete in their respective sports in which 11 total student-athletes were recognized. Hofstra was the only school in the conference to have three award winners. Nominees for the award must be a starter or important reserve on their team and must have a minimum cumulative grade point average of 3.25. The winners were selected by a vote of the media relations directors at each CAA institution.

Burg, a double major in physics and math and a minor in astronomy, was selected to the Capital One Academic All-America first team for baseball in 2013. He was a 2012 Rhodes Scholar finalist and was a finalist for the NCAA Walter Byers Scholarship. Burg received the James M. Shuart Award as Hofstra’s top male scholar-athlete, Hofstra’s Outstanding Senior Scholar Award in recognition of his grade point average and the Outstanding Graduating Mathematics Senior Award. As a player, the southpaw was tied for the team lead in wins with a 3-4 mark. He made 14 appearances, including 12 starts, and posted 37 strikeouts in 62 1/3 innings.

Maier was named a Scholar-Athlete for women’s lacrosse for the second straight season. A senior with a double major in English and early childhood and childhood education, she is a six-time member of the Hofstra Provost’s List (4.0 GPA), was named to the IWLCA Academic Squad in 2012. Maier received the Sylvia Giallombardo Female Scholar Athlete Award as Hofstra’s top female scholar-athlete in 2012. On the field, Maier scored 15 goals and had 27 draw controls in 2013 despite being limited to 10 games due to injury. She finished her career with 96 goals, 112 points and 128 draw controls. She was a first-team All-CAA honoree in 2011.

Galati recorded her third consecutive Scholar-Athlete award less than a month after being named to the Capital one Academic All-America softball team. The physical education major is coming off another terrific season in earning second-team All-America honors after making the All-America first team a year ago. A four-time CAA Pitcher of the Year, Galati posted a 40-12 record this season and led the nation with 22 shutouts. She was the only 40-game winner in the nation and led the Pride to a CAA championship and a berth in the NCAA Regional finals. Galati struck out 395 batters over 341 innings this season.