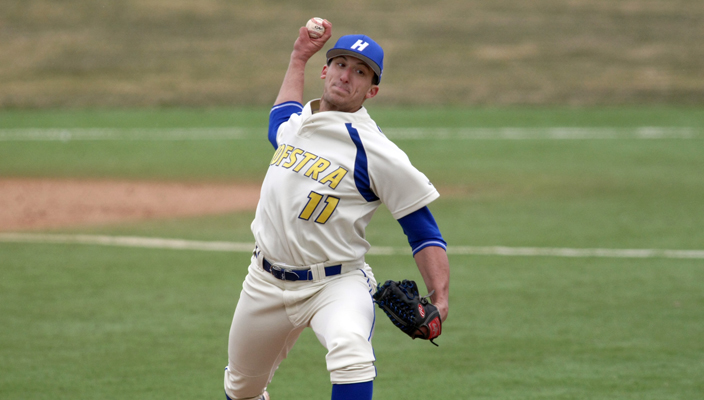 Hofstra University junior pitcher Bryan Verbitsky (Levittown, NY) was selected during the second day of the 2013 Major League Baseball First Year Player Draft. Verbitsky was chosen by the San Diego Padres in the third round of the draft (86th overall) and was the first pitcher selected by the team.

“It was quite a surreal moment to hear my name get called,” said Verbitsky. “My family and I could not be happier. I knew that the Padres were interested in me, but it was still a pleasant surprise to get selected when I did. I want to thank the Padres organization for giving me this opportunity. I also want to thank Coach Russo, Coach Haynes, Coach Johns, Coach Colasuonno and all of my Hofstra teammates for all that they have done for me. I would not be in this position without them. I would also like to thank the entire Hofstra University community and fans of Hofstra Baseball. It was great playing right in my backyard and I have many great memories of my three years here.”

“I am very excited for Bryan,” said Hofstra Baseball Coach John Russo. “This is a great opportunity for him and is something that he has worked extremely hard for. While I would love to have him back at Hofstra for his senior year, I could not be happier for Bryan and wish him all the best as he embarks on his professional career. The Padres are getting a great player and an even better person.”

This past season Verbitsky posted a 3-4 record and a 2.66 ERA in 19 appearances, including three starts, for the Pride. The right-hander pitched a career-best 44 innings and posted a team-high 51 strikeouts, while walking just 10 batters. His three wins tied for the team lead, while his ERA ranked second. He also added three saves and held opponents to a .178 batting average.

Verbitsky started the year pitching out of the bullpen for the Pride and was moved into the starting rotation for the final three Colonial Athletic Association series’ of the year. Verbitsky posted his best outing of the year in his final relief outing when he turned in a career-long 7 1/3 innings against Delaware in a 4-3, 13-inning win. While he did not factor in the decision, Verbitsky allowed just one hit (an infield single) and struck out six batters without allowing a run. Verbitsky closed his Hofstra career with a win over NCAA Regional participant UNCW in his final start, allowing one run on two hits over six innings with six strikeouts in a 5-1 Pride victory.

Verbitsky made 57 career appearances for the Pride, starting five games. He was 4-7 overall with a 3.84 ERA and 11 saves. He tallied 87 strikeouts in 86 2/3 innings and held opponents to a .243 batting average. His 11 saves rank second all-time at Hofstra, while his 57 appearances place him 12th on the all-time list. He also compiled a .257 career batting average with eight home runs and 52 RBIs in 210 at-bats.

During the summer 2012, Verbitsky was a Cape Code Baseball League All-Star while pitching for the Yarmouth-Dennis Red Sox. He starred at Island Trees High School where he was a two-time Diamond Award recipient as the top position player in Nassau County. He also was a two-time All-New York State and All Long Island selection, and a three-time all-county pick.