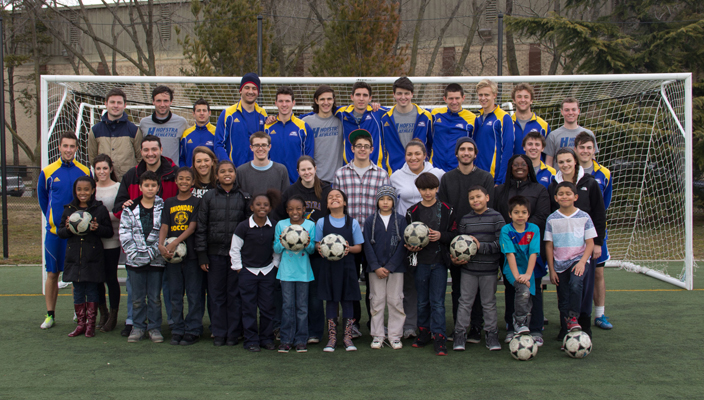 Projects included walk-a-thon fundraisers, reading trips to local elementary schools, polar plunges and the inaugural CAA Food Drive Challenge. The food drive brought in more 400 pounds of food and $1,100, all of which was donated to the Island Harvest Food Bank. Student-athletes raised more than $4,000 for various local charities throughout the semester, highlighted by the 4th Annual SAAC Sponsored Date Auction that raised more than $1,000 for the Special Olympics of Long Island.

Over the 2012-13 academic year, Hofstra University student-athletes took part in 36 individual and 66 combined community service projects, totaling over 1,500 hours of service. Emily Burke, a sophomore on the Pride volleyball team, believes that service to others is ingrained in student-athletes. “Being a student-athlete and a teammate, we are always looking to make sure success is attained as a whole, and not just focus on our own accomplishments. It is in that spirit that student-athletes are drawn to taking part in community service projects,” said Burke. “The Hofstra and surrounding community is our team, and we will always try and help those around us.”

Below are a few highlighted projects that our student-athletes worked on this spring:

Hofstra student-athletes took part in several opportunities to help the Big Brothers Big Sisters of Long Island. On March 13 the men’s soccer team hosted a clinic on campus for members of the organization and the following month the field hockey team welcomed the organization for a clinic on April 10. Children received instruction on game strategies and ran through drills and games organized by student-athletes.

On April 27 the Big Brothers Big Sisters Organization hosted the Annual 5k Walk-A-Thon in Eisenhower Park. Several teams from Hofstra donated money and took part in the festivities. Men’s soccer, men’s tennis, women’s tennis and wrestling all walked in the event, while the men’s and women’s cross country teams led the way by running the 3.1 mile route. In total, Hofstra student-athletes donated more than $400 to the Big Brothers Big Sisters of Long Island while enjoying a great day.

In addition to the clinics and walk-a-thon, the Hofstra women’s cross country team gathered articles of clothing while clearing out their dorm rooms at the conclusion of the semester and donated the collected items to the Big Brothers Big Sisters of Long Island.

On Saturday, March 2 the Special Olympics of Long Island hosted their Annual Polar Plunge. Student-athletes from men’s tennis and women’s cross country took the plunge at Bar Beach in Port Washington, NY, while team members from women’s soccer and wrestling helped the participants in raising more than $1,500.

In what has become an Annual tradition, on April 17 the Hofstra University Student-Athlete Advisory Committee (SAAC) hosted its Annual Date Auction in support of the Special Olympics of Long Island. The event had music, emcees, contests and live date auctions. The event was held on campus and raised more that $1,000.

On May 8 Hofstra student-athletes from the women’s basketball team took a special visit to the Rosemary Kennedy School in Wantagh, NY. Student-athletes spent the afternoon with children and young adults with developmental disabilities, taking them through a variety of basketball drills and stations that were fun and interactive.

Team members from the Pride volleyball team volunteered at the Cradle of Aviation Museum’s Annual Chocolate Expo on March 24. Student-athletes assisted with various activities throughout the day, including managing check-in lines as well as interacting with and entertaining children at the museum.

In honor or Dr. Seuss’ birthday celebration on March 1, student-athletes made trips to three local elementary schools and shared their favorite Dr. Seuss books. Team members from men’s and women’s cross country, women’s basketball, women’s golf, volleyball, wrestling and women’s lacrosse visited children from pre-k through 4th grade to read with the students as well as stress the importance of a proper balance between education and sports.

Hofstra4Congo was a campus wide, week-long event held in March that encouraged students to give up certain activities throughout the week and donate the money they would have spent to Hofstra4Congo. Students gave up things such as coffee and going to the movies and helped in contributing thousands of dollars to the charity. Student-athletes from women’s soccer and men’s tennis took part in this event.

Hofstra student-athletes from the women’s cross country team took the afternoon of January 21 to volunteer at the Long Island Children’s Museum. The museum was hosting a day of activities in remembrance of Dr. King. Student-athletes assisted with lessons about civil rights and racism, and created crafts with the children in attendance.