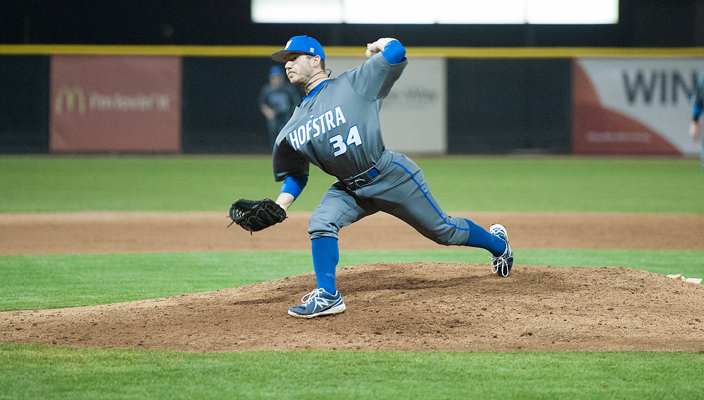 Hofstra senior pitcher Joe Burg has been named to the Capital One Academic All-America Baseball First Team, as selected by the College Sports Information Directors of America (CoSIDA). He is the first Pride baseball player, and just the ninth Hofstra student-athlete overall, to earn first team Academic All-America accolades.

Burg is the 22nd Hofstra student-athlete to be selected to the Academic All-America team in school history and joins softball pitcher Olivia Galati as a first team Academic All-American this season, which marks the third time that Hofstra has produced two first team selections in the same year. The previous pairs were Arni Gunnarsson (men’s soccer) and Heather Brousseau (softball) in 2003-04, and women’s soccer teammates Dana Bergstrom andTiffany Yovino in 2010.

Enrolled in Hofstra’s Honors College, Burg posted a 4.0 grade point average as a physics and mathematics major. Earlier this academic year he was a finalist for a Rhodes Scholarship, becoming just the second Hofstra student to earn that distinction. He was also a finalist for the NCAA’s Walter Byers Postgraduate Scholarship, a Capital One Academic All-District First Team selection, a candidate for the Senior CLASS Award and the recipient of Hofstra’s James M. Shuart Award as the Male Scholar-Athlete of the Year.

Burg is a member of Phi Beta Kappa, the Pi Mu Epsilon Mathematics Honor Society, the Sigma Pi Sigma Physics Honor Society and the Golden Key International Honor Society. He was the recipient of the Phi Beta Kappa Sophomore Book Award, the 2010 Carl Friedrich Gauss Award for Excellence in Mathematics, the 2011 Homer Demetriou Endowed Scholarship for Mathematics, and the Azelle Waltcher Endowed Scholarship for Mathematics in 2012. The left-hander was also a three-time Colonial Athletic Association (CAA) Commissioner’s Academic Award recipient.

Active in the community, both on and off-campus, Burg was a member of Hofstra’s Student-Athlete Advisory Committee and participated in the many service projects undertaken by the organization. He also served as a physics and astronomy tutor, and as a teaching assistant for the Physics Department.