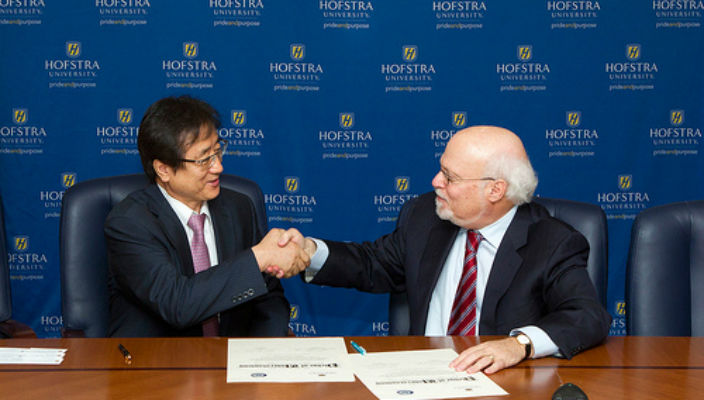 In a first-of-its-kind agreement with a foreign university, Hofstra has partnered with Changwon National University (CWNU) in South Korea to increase its global presence through student and faculty exchanges, internships, and research collaborations.

At a ceremony at Hofstra in May, CWNU President Chan Gyu Lee and Hofstra University President Stuart Rabinowitz signed a symbolic agreement to mark the partnership, pledging to do “all they can to promote institutional cooperation.”

“South Korea is an economically vibrant country and has an excellent system of higher education,” said President Rabinowitz. “We’re both global universities, so this is one of the connections that just makes sense to us, especially at the level of the business schools. It’s an important step forward for us.”

Founded in 1969, Changwon National University is a public university of about 15,000 students in the capital city of the South Gyeongsang province.

“This partnership will help students to develop not only their academic and language ability, but also an understanding of global culture,” said President Lee. “I expect, for the very first step of developing this relationship, the exchange student program will create a solid foundation of meaningful cooperation between two universities.”

As part of the five-year agreement, both CWNU and Hofstra will encourage cooperation and collaboration in any discipline that is taught at both universities. Eligible students at both the undergraduate and graduate level can participate in an exchange program for academic credit, with each institution hosting an average of two students per academic year. Faculty exchanges will also be encouraged to foster joint training programs, research projects and academic initiatives. The schools will also explore opportunities to organize joint conferences and seminars.

“This relationship demonstrates the friendship between Changwon and Hofstra and also helps both institutions become more global in their orientation,” says Hofstra Provost and Senior Vice President for Academic Affairs Herman Berliner. “This, in turn, helps better prepare our students to compete in a more global world.”