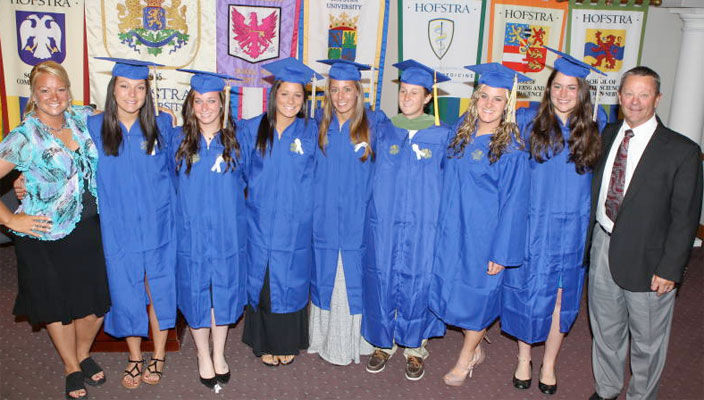 Hofstra University President Stuart Rabinowitz and other distinguished University personnel held a private graduation ceremony for the Hofstra Softball program’s eight seniors, who missed Sunday’s graduation as they were competing in the 2013 NCAA Division I Softball Championship Regional at the University of Missouri in Columbia, MO.

The special commencement ceremony, which has become a tradition for the softball program, became necessary as the Pride advanced to the championship game of the NCAA Division I Softball Championship Regional this past Sunday, missing the University graduation ceremonies that day.

The Pride, which has made 14 NCAA Tournament appearances, took the sixth-ranked Tigers of Missouri to second title game in the regional after posting two victories over Oregon State around a 1-0 loss to host Mizzou before coming back to top the Tigers in the first potential title game on Sunday afternoon, 10-0 in five innings.

Hofstra ended the season with a 46-13 record in setting the program-standard for single-season wins, besting the previous mark of 45-win campaigns set by both the 2008 and 2010 squads.