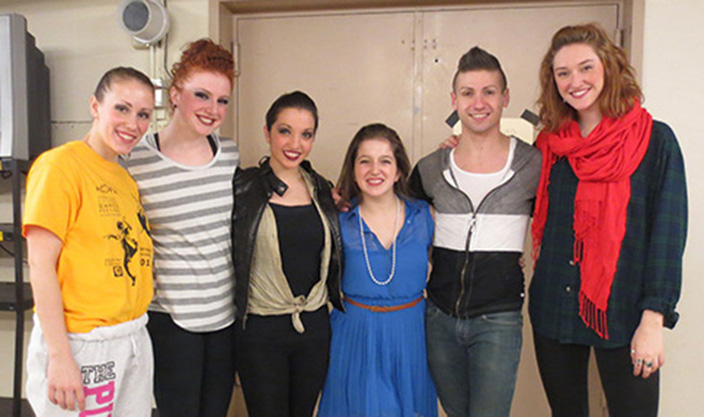 The festival’s adjudication process is completely blind – the judges do not know the names of the student choreographers or performers of each piece. They also do not know the school affiliations of the dances. At the end of each “semifinal” dance concert, the judges give notes – which can be full of praise or scathing. In the end, they select only 12 of the dances to be performed at the Gala. That the work of both participating Hofstra students was selected for the Gala is an incredible honor, not only for Ms. Sheppard and Ms. Robbins, but for Hofstra Dance.

Sophomore Alexis Robbins is a dual major in dance and exercise science at Hofstra. One of the reasons she decided to attend Hofstra is because of its offerings in tap – which she says is rare on the college level. For ACDFA she choreographed and performed a contemporary tap solo titled “Slow Dancing in a Burning Room,” which she performed to the John Mayer song of the same name. Hers was the only tap piece in the festival.

Alexis performed on the Hofstra stage again in April for the University’s annual Spring Dance Concert. She performed in a piece choreographed by guest artist David Parker, titled “Sam, Steve, Wolfgang and Us.” The finale of the work featured Alexis tap dancing to a vocalist singing a cappella.

Alexis’ future plans including continuing her choreography work, but eventually she would like to go into physical therapy for dancers.

This year was Caitlin Sheppard’s second time participated in the ACDFA’s Festival and Gala. She choreographed “[under cover] of darkness,” which was performed by five of her fellow dance students – including Alexis. Caitlin also collaborated with Hofstra alumnus and musician Jordan Chiolis, on the musical accompaniment for the piece. Caitlin describes the work as being about the other world a person’s mind enters when they are asleep.

Caitlin, a junior at Hofstra, has performed in five Hofstra Dance Concerts and is active in the student group Danceworks. She is most interested in contemporary dance and jazz. After graduation she plans to make her move to New York permanent and audition for various dance companies. Her ultimate goal is to start her own dance company.