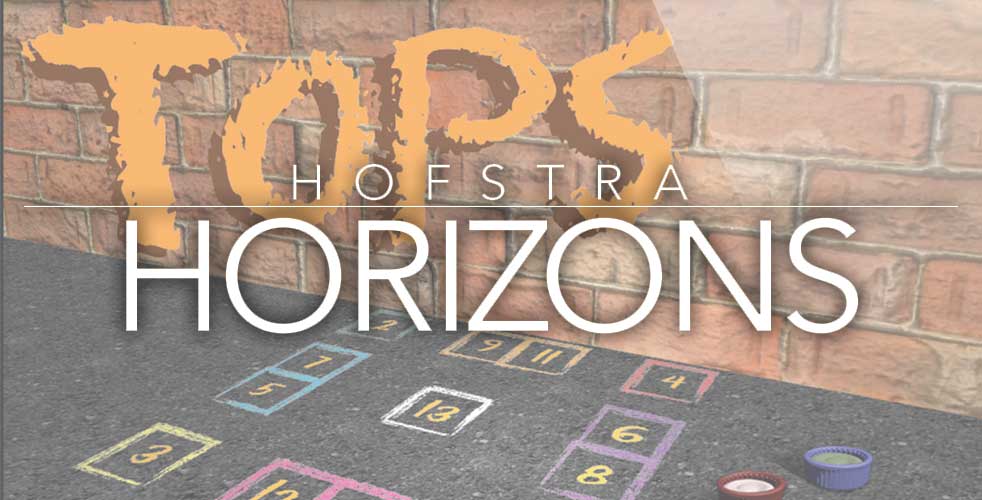 In North America, Lyme disease is the most common tick-borne disease, with more than 150,000 cases reported since 1982, and 20,000 new cases annually. Lyme disease (LD) causes a bewildering array of symptoms, from initial rash, fever, headache, and fatigue, to more serious problems with joints, the heart, and the nervous system; delayed treatment can lead to disabling illness. The economic costs of LD are estimated conservatively at more than $200 million annually in the United States. Understanding of this disease has increased enormously since its discovery by the medical community in 1975. For example, we now know that LD is caused by the bacteria Borrelia burgdorferi in the United States, while other Borrelia species cause LD in Europe. Most LD cases can be treated successfully with antibiotics if treatment begins early. We know that the “hard-bodied” ticks (genus Ixodes) are the vectors that move Borrelia from host to host, including humans. And we know that Ixodes ticks can use lots of different animals for hosts.

But one of the strange things about Lyme disease is its distribution in the eastern United States, where it is common in the northeast and northern midwest but rare throughout the south (Figure 1a). This variation is extreme, ranging from a high of 37.8 confirmed cases/100,000 people in New Jersey to a low of 0.4 confirmed cases/100,000 people in South Carolina. The same trend is reported in pet dogs that test positive for exposure to Borrelia, so this likely indicates a trend in the disease prevalence. In the eastern United States, the black-legged tick is the specific tick that spreads LD. However, the black-legged tick (Ixodes scapularis) occurs throughout the eastern United States, including the south, where LD is rare (Figure 1b). Along with the tick are many of the same hosts it feeds on elsewhere. Why, if the disease organism, the ticks, and the animal hosts all occur over this large range, is LD rare in the south? It’s certainly possible that if we knew what caused this variation in LD, we might be able to reduce its incidence in the north.

Four hypotheses have been suggested to explain this variation in LD prevalence, including the dilution effect hypothesis, the phenology hypothesis, the black-legged tick abundance hypothesis, and the black-legged tick genetic hypothesis. In 2009 the National Science Foundation awarded our laboratory and a consortium of five other universities $2.5 million to test these hypotheses and help public health agencies develop better LD prevention strategies. We immediately started a series of field and laboratory projects that eventually spread over eight states, collecting a wide variety of data on LD incidence, black-legged ticks, and their hosts. Now, three years later, this work has started to produce some amazing results. In this article we’ll discuss some of these results in the context of the various hypotheses we set out to test. 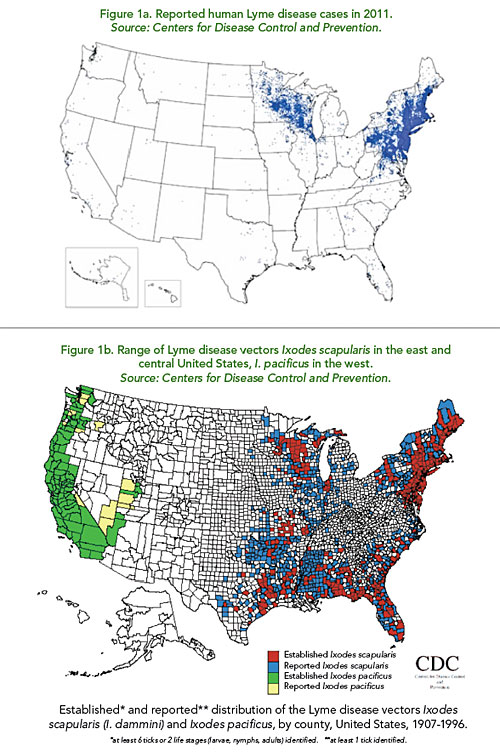 We did this using a variety of techniques. First, we established field research sites in Rhode Island, New Jersey, North Carolina, South Carolina, Florida, Alabama, Tennessee, and Wisconsin. At each of these sites we counted tick hosts by installing three arrays of traps to capture small mammals (like mice and shrews), medium mammals (like raccoons and opossums), and lizards (like skinks and fence lizards) (Figure 2). We used camera traps to detect larger mammals (like deer and coyotes) (Figure 3). We used these traps to capture animals that might have ticks on them, and then we counted ticks on the animals we caught. We removed ticks so they could be tested to determine whether they carried LD, and we took tissue samples from hosts to see whether they were infected too. We surveyed for a wide variety of tick hosts simultaneously over a wide geographic area that included the ranges of many different tick hosts and LD prevalence, and we standardized our techniques so that we could easily compare results among all the sites. These special aspects of our work put us in the position to test these hypotheses far more thoroughly than anyone had done before.

We are starting to pull all the data together for analysis, but we can already see some clear results. Our Hofstra lab focused on the South Carolina and New Jersey sites, so that is the focus of this article. We’re also going to talk only about the juvenile ticks, and not the adult ticks. That’s because LD transmission has to go through the juveniles — if they don’t get LD, the adults won’t either. 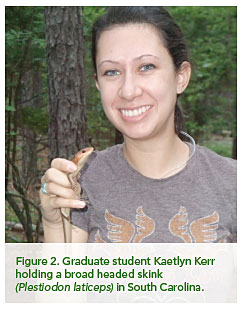 We found that in the north, where there were few lizards, juvenile ticks were feeding almost exclusively on small mammals, as other researchers had found previously. These were places where LD is very common. However, when skinks were present in an area, juvenile ticks were much more likely to be on the skinks than on the small mammals (Figure 4). There could be many reasons for this difference — maybe, overall, black-legged ticks like lizards as hosts better than they like mammals, and so they take lizards wherever lizards are available. Or maybe the ticks feed on the mammals and the lizards at whatever rate these hosts are encountered, but mammals are better at removing ticks. We are planning more research to investigate these possibilities, and other team members are looking deeper into the reservoir competence of southern lizards. In either case, this finding seems to support the dilution effect hypothesis, suggesting that at least one reason LD is rare in the southern U.S. is that the lizards there replace small mammals as important hosts for juvenile ticks, and that the lizards are less reservoir competent, thus blocking LD transmission. Interestingly, climate change models predict that southern lizards will expand their ranges northward as temperatures warm across the United States. 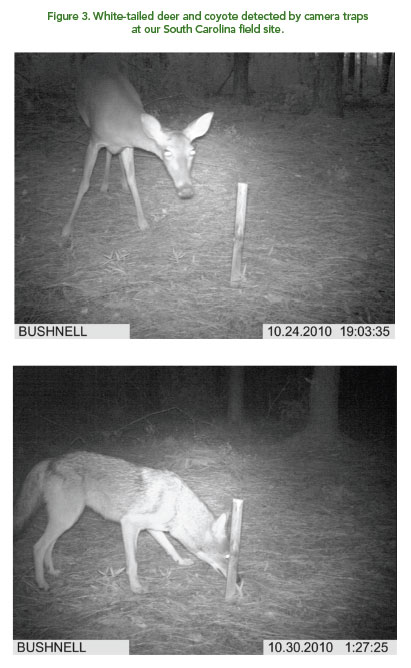 The phenology hypothesis is based on differences in the timing and development rate of the black-legged tick juvenile stages. The word “phenology” refers to the study of regular patterns of animal and plant behavior, such as seasonal bird migration and the timing of autumn leaf fall. Ticks have four life stages: egg, larval, nymph, and adult. In the northern United States, black-legged ticks have a two-year life cycle: adult females feed and mature in the fall, overwinter on the ground, and lay eggs in the spring. The larvae hatch from the eggs in summer and feed on small-bodied hosts, then molt and become nymphs. The nymphs overwinter and feed on small-bodied hosts the next spring and summer, molt again, and become adults. LD is maintained in this system because larvae feed on hosts that have already been infected by nymphs. The phenology hypothesis is based on the idea that in the southern United States the climate is warmer, and the tick life cycle is sped up, and larvae often feed on hosts that have not yet been infected by nymphs. We sampled ticks at all of our field sites, using standardized techniques, so our results would be completely comparable. We’re still waiting to analyze the rest of this year’s data, but so far we’ve found that southern juvenile ticks had much the same phenology as did juvenile northern ticks. That is a challenge to the phenology hypothesis.

The data from our tick surveys and our counts of ticks on hosts also helped us test the black-legged tick abundance hypothesis, which is the suggestion that while black-legged ticks do occur throughout the south, they never reach high enough numbers to sustain LD in host populations. Like many researchers before us, we had great difficulty collecting ticks in the south, even using the same sampling techniques that were highly successful in the north. But while we were trying and failing to collect southern ticks, the small mammals – and especially the skinks – had plenty of ticks on them. Clearly there are substantial numbers of ticks in the south; the impression that black-legged ticks are rare in the south seems to prevail, at least in part, because they’re difficult to sample there.

Obviously, the tick-collecting techniques we used successfully in the north don’t work as well in the south, and that must be explained. The black-legged tick genetic hypothesis is based on the previous findings that there are genetic differences between black-legged ticks in different parts of the country, resulting in somewhat separate subpopulations. Maybe the southern black-legged tick subpopulations don’t transmit the Borrelia infections as effectively, and maybe they prefer lizard hosts over mammal hosts. Our tick-collecting techniques involve sampling in areas where we would expect to find ticks searching for mammals, whereas ticks searching for lizards might be someplace else. Other team members are currently looking at the possible impact of genetic differences in tick subpopulations on host-searching behavior. 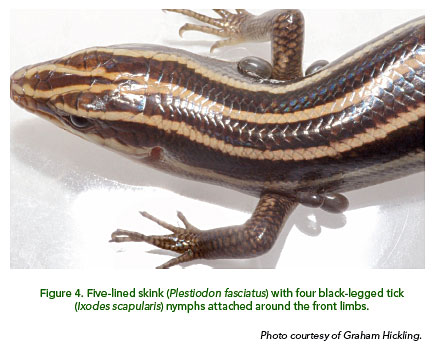 LD is an important health concern in Europe as well, where they have different Ixodes ticks and different Borrelia. In Europe wall lizards (genus Podarcis) often host ticks, and it appears that wall lizards are reservoir competent for European Borrelia. Therefore, in Europe, lizards don’t reduce LD risk; rather, they may increase it. The two common wall lizard species in Europe have been introduced into numerous places in North America, including Long Island! Wall lizards are well named; they co-exist very well with people in rural, suburban, and fully urban areas and are often seen on walls. For example, there are now large and stable wall lizard populations in New York City. There is no immediate concern that these lizards will spread LD into our cities, I personally have seen and captured many hundreds of wall lizards from most of the introduced populations, and have never seen a tick on any of them. However, wall lizards do live here in some areas where black-legged ticks occur, and where LD cases are common. We decided to investigate the potential role that the introduced wall lizards might play as they spread into more areas in the United States with black-legged ticks and LD.

We used a two-pronged approach: first, to find out whether the wall lizards are reservoir competent for the North American Borrelia, and second, whether black-legged ticks would even choose to feed on wall lizards. Our collaborators at University of Tennessee (UT) tried to do the competency tests, but they couldn’t get Borrelia-infected tick nymphs to even feed on the lizards! The ticks didn’t seem to recognize the lizards as potential hosts. Here at Hofstra we did host-choice experiments with larval ticks, offering them a choice of a high-quality host (mouse) and wall lizards. In contrast to the UT results, in our studies the ticks went rapidly to the wall lizards and chose them as hosts. We’re not sure what this contrast means — this could be due to use of larval ticks in one case and nymphal ticks in another, or some other aspect of experimental design. Next summer we will repeat and expand these experiments.

Over the next two years we will be putting all our data in order and carry out the most intensive data analysis, with our most important results emerging soon after that. It is certainly possible that we will find support for more than one of the four hypotheses, but, regardless, we expect to enhance understanding of the processes leading to the patterns we see in LD distribution and abundance, particularly in the south. Furthermore we plan that our results will help inform public health workers and the public about their present and potential future risk of LD in the southern United States, where there is high uncertainty among the general public about LD and other tick-borne diseases. Our work will also result in improved forecasts of LD risk patterns, vector management and public education regarding LD.