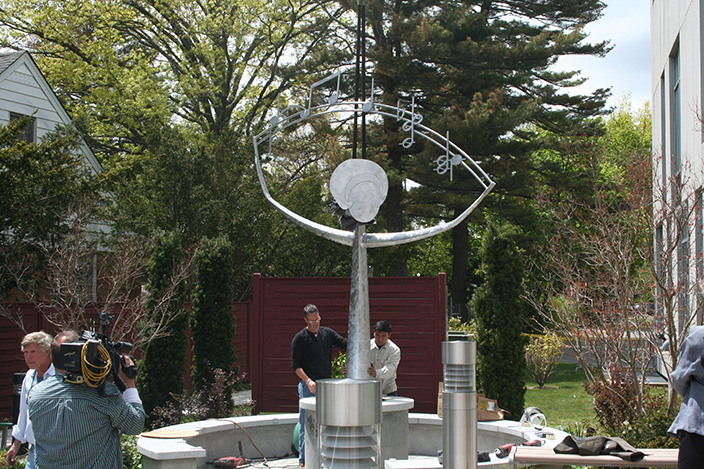 Hofstra University, Hempstead, NY … Songwriting legend Ellie Greenwich, who passed away in 2009, was a Hofstra alumna whose songs defined an era of American music. “Leader of the Pack,” “Be My Baby,” “Chapel of Love,” “Da Doo Ron Ron,” “Then He Kissed Me,” “Do Wah Diddy,” and “River Deep, Mountain High” are just a few of the hit songs she either wrote or co-wrote. On May 7, 2013, a beautiful, 1,000 pound steel sculpture was installed on campus in her memory. It was placed in a tranquil garden, located just outside Hofstra’s New Academic Building, home to the Department of Music. The sculpture, created by artist Peter Homestead, was commissioned by Greenwich’s sister and brother-in-law, Laura and Bob Weiner. The Weiners also established the garden.

Homestead says that the design for the sculpture was based on a photograph of Greenwich accepting a Grammy Award with her arms held high in the air. The musical notes floating above the figure are actual notes from Greenwich’s favorite song, “I Can Hear Music.” Homestead has had a long relationship with Hofstra, both creating artwork for the campus (including busts of Allan Tod Gittleson and Howard “Howdy” Myers, a sculpture of Maurice Greenberg and the abstract sculpture “Leda” near Breslin Hall) and assisting with the acquisition of pieces for the Hofstra University Museum. (More information on Peter Homestead is available at www.peterhomestead.com )

The Songwriter’s Hall of Fame credits Greenwich as one of the most successful songwriters of modern pop music. Her songs, which have sold in the tens of millions, earned her 25 gold and platinum records and more than 33 BMI Awards and numerous civic and Hofstra alumni citations.

Greenwich majored in English and minored in secondary education at Hofstra. Her sister said, “Ellie had some of her best experiences at Hofstra.” In an informal autobiographic essay titled “All About Me,” Greenwich wrote, “During my years at Hofstra, I was in Wreath & Foil sorority where I was honored as the most active and most beloved sister in the same year. … I performed in some of the musicals done at the Hofstra Playhouse. I was Outstanding Senior Woman and, unbelievably, voted Spring Queen in 1961.” Also in 1961, she met co-writer Jeff Barry, whom she later married, and they experienced much success, working with music leaders the likes of Phil Spector and the team of Jerry Leiber and Mike Stoller.

“Ellie was a woman before her time,” said Weiner. “It wasn’t accepted for a woman to be connected in that end of the business, it was a man’s world.” However, gender inequality did not stop Greenwich during these years. She seized the charts as one of New York’s top demo/session singers and vocal arrangers, working with artists ranging from Ella Fitzgerald, Frank Sinatra, Aretha Franklin, Blondie, Jim Croce, Dusty Springfield, Lesley Gore, Electric Light Orchestra, Bette Midler, The Manhattan Transfer, Bobby Darin and even Cyndi Lauper, on her hit “Girls Just Wanna Have Fun.” She is also credited with discovering Neil Diamond and was a frequent collaborator, singing background on his hit songs “Cherry, Cherry,” and “She Got the Way to Move Me,” among others. Diamond told Rolling Stone after her death, “If I hadn’t met Ellie Greenwich I wouldn’t have had a career.”

In 1985 The Leader of the Pack, a show about her life and music opened on Broadway and was nominated for a Tony Award in the best musical category. In May 1991 Greenwich was inducted into The Songwriter’s Hall of Fame, and in 2010 she was posthumously inducted into the Rock n’ Roll Hall of Fame.

“Despite her fame, Greenwich was very humble and good spirited,” said Weiner. “Her passion was for music and creating; not fame and glory. She was a comedian and always knew how to make everyone laugh, but never understood the impact she had on people.”

Morgan Smith ’13, courtesy of The Chronicle, contributed to this press release

Watch the WABC-TV Eyewitness News segment about the sculpture installation at http://abclocal.go.com/wabc/story?section=news/entertainment&id=9093656