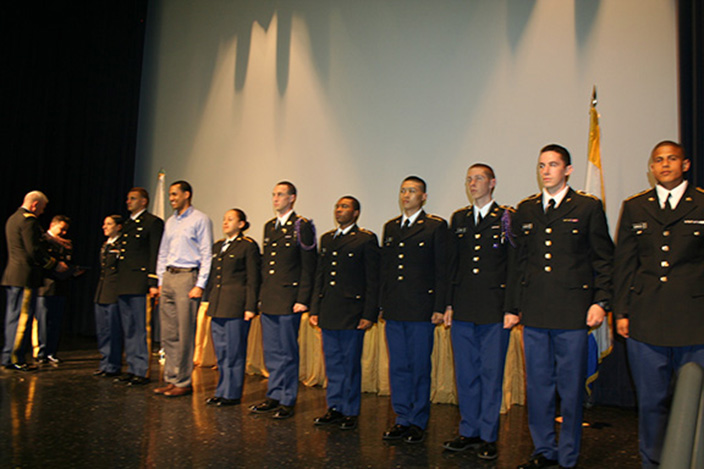 Hofstra University, Hempstead, NY … Hofstra University ROTC students were formally recognized at an awards ceremony held on May 2, 2013, for their academic and military training achievements.

Some of the awards given at that time were:

*The Hofstra Veterans Alumni Chapter, SGM Churchill Award to Cadet Command Sergeant Major Thomas Harris. The award is named for Charles “Chuck” Churchill, a U.S. Army veteran who spent 29 years of service at Hofstra as assistant facilities manager and was very popular among staff and students at Hofstra.

*The American Legion Post for Nassau County gold medal was awarded to Cadet Katie Jacques, who was selected as the Cadet Battalion Commander 2012-13 for the Hofstra Army ROTC Program.

*The National Sojourners Award was given to Cadet Berlinda Olivier.

In addition to these, many other organizations were present to honor the Hofstra cadets, including the Sons and Daughters of the American Revolution, Veterans of Foreign Wars, Vietnam Veterans of America, the Hofstra Veterans Alumni Chapter and the National Society of Pershing Rifles Company Q-8 Alumni.

The ROTC will salute its students again at its spring commissioning ceremony on Friday, May 17, 10 a.m., at The Helene Fortunoff Theater, Monroe Lecture Center, South Campus. For more information on ROTC at Hofstra, visit hofstra.edu/ROTC.