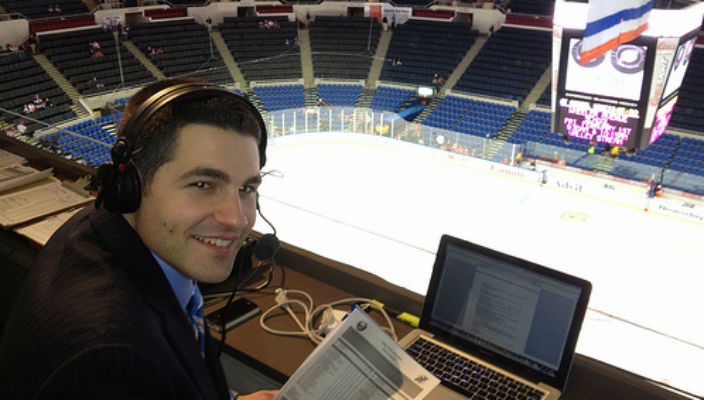 When the Islanders took the ice for the team’s 41st home opener at the Nassau Coliseum in January, Dexter, now 21 and a Hofstra senior, was in the radio booth, doing color commentary for the game.

His dad was home in Levittown, listening to his son work the game on WRHU-88.7 FM, Hofstra’s student-run radio station, which has been the Islanders flagship station since 2010.

Now, a little over three months later, Kevin is headed someplace he and many of the young Islander players have never been before: the NHL playoffs.

The Islanders will face the top-seeded Penguins on May 1 in Pittsburgh in their first playoff appearance since the 2006-07 season. Kevin Dexter, who has done color on almost 60 games in the last two regular seasons, will be on hand with Islanders play-by-play announcer Chris King.

It’s an improbable dream, not only for a young team that finished at the bottom of their division and conference last year, but also for Kevin and other aspiring sports journalists at WRHU, who never imagined they’d get such a coveted assignment as students.

Besides Kevin’s work in the booth Hofstra juniors Rob Joyce and Michael Sullivan will report from the Islanders’ and Penguins’ locker rooms, respectively, when the playoff series returns to the Coliseum for games three and four.

The students, like the players, are young men with lots of talent and ambition who now find themselves in a rare opportunity to shine.

This week the students, all broadcast journalism majors, are busy preparing for the first few games, putting together charts of player and team stats, researching interesting storylines and doing ice-side interviews with players such as star center John Tavares. The clips will be used for color commentary and intermission interviews they’ll produce for each broadcast. One of the key questions they are asking players: what is this moment like for you?

It’s a question the students could ask themselves.

“We all saw the buildup coming,” says Rob Joyce of Coventry, CT, one of the station’s three color analysts during the regular season. “Once we realized the team would make it in, it was a pretty cool feeling to know that there are people who work 20 or 30 years to get to the point that we were at already in college, covering a professional playoff.”

When WRHU partnered with the New York Islanders in 2010, it became the only college radio station in the nation to broadcast games for a professional sports franchise. More than 20 students work on each live broadcast, 212 games in total so far, as on-air color analysts, sideline and locker room reporters, and behind the scenes in production and engineering. “Our students take great pride in the quantity and major market quality of these broadcasts on Radio Hofstra University,” says John Mullen, the station’s operations manager.

Initial reaction to the arrangement was mixed, especially among diehards who were not familiar with WRHU’s programming.

“We experienced backlash on social media that first year,” says Joyce, 20. “People would say this is a joke. But as soon as people listened, they realized we’re not just a bunch of college kids messing around on air. We work as professionals. We do our homework. We know the team as well as anyone else would.”

“When our students at WRHU were faced with the challenge of producing these Islanders games, they proved themselves with skills and smarts that would rival what you’d find in any other broadcast in the league,” says Evan Cornog, dean of the School of Communication, who grew up in Illinois listening on the radio to the Chicago Blackhawks of the Bobby Hull/Stan Mikita era. “WRHU has been the flagship station of the Islanders for three years now. We have enjoyed witnessing the team’s success this year, and we’re glad our students get to share in that success.”

Rob Joyce, like Kevin Dexter, grew up with a love of sports. He’s wanted to be a play-by-play announcer since the age of seven, having had a firsthand look at the profession all his life: his father, Bob Joyce, is the voice of UConn Huskies women’s basketball and a former radio producer for the Hartford Whalers (now Carolina Hurricanes) hockey team.

Joyce made the decision to come to Hofstra after visiting the campus in his junior year of high school and arranging a meeting with Ed Ingles, WRHU’s Professional-in-Residence and a highly-respected radio broadcaster for more than 50 years, including 24 years as sports director and morning drive sports anchor for WCBS Radio in New York.

While other prominent communication schools reserve the best opportunities for more senior students, Ingles explained that at Hofstra, students can get hands-on experience right away. Joyce was sold; he joined WRHU as a freshman. By sophomore year, he was working behind the scenes as a lead producer on Islander broadcasts, before moving up to locker room interviews. This past year, he served as Program Director of Talk for the station as well as a color analyst for the NHL games.

Michael Sullivan, 20, Sports Director at WRHU, was sports editor of his high school paper in Haverhill, MA., and initially planned on a career in print. But at Hofstra, he joined the radio station and soon discovered a natural talent for on-air announcing and reporting.

“The biggest growth for me has been in the comfort level of doing an interview and making it conversational and flow well,” says Sullivan, citing his experience interviewing Hofstra student-athletes as great preparation for his work with the Islanders.

“When the opportunities starting coming, he said, “we were ready to go.”

For Michael Dexter, Kevin’s father, the answer comes easily. “We never miss a game he is on the radio,” the elder Dexter said. “We huddle around any device that we can get WRHU on. It’s an extremely proud moment for us.”