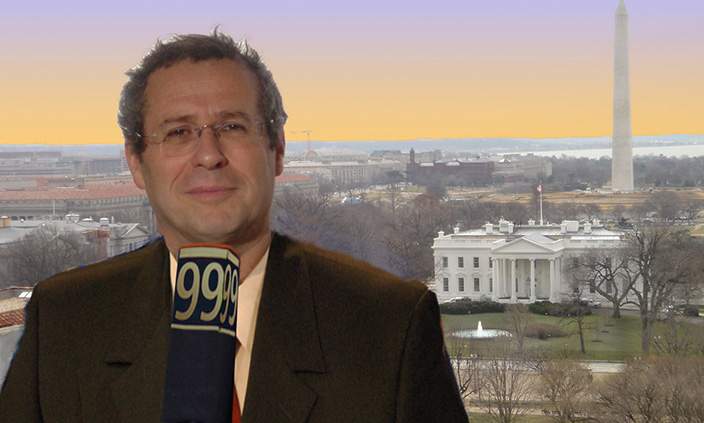 Hofstra University, Hempstead, NY  … The Hofstra Cultural Center and Hofstra Hillel’s Issues in Judaism Lecture Series presents two lectures in April 2013 by Michael Tuchfeld, one of Israel’s leading broadcast journalists. Among the topics to be discussed will be President Barack Obama’s visit to the Middle East this March, his first trip to the region during his second term as president.

This is Mr. Tuchfeld’s ninth annual visit to Hofstra to present timely lectures on current topics regarding Israel and the Middle East. He is a political analyst and columnist for Makor Rishon magazine; host of Radio Galey Israel; and former parliamentary correspondent and host of Israel Radio, IBA and Channel 2 news, The Knesset Channel in Jerusalem, Israel.

The topics of Mr. Tuchfeld’s spring lectures are:

The Ballot Impact: Where is Israel Heading After the Recent Elections?
Wednesday, April 3, 2013, 7 p.m. The discussion will cover:
• Changes in the Knesset and the government
• Israel’s approach to the peace process
• The structure of Israel’s society

The Industry of Deception: What Your TV Doesn’t Show You
Wednesday, April 10, 2013, 7 p.m. The discussion will cover:
• The media and Israel
• Web news sites, social networks and broadcast channels in Europe and the United States
• Biased information about the Middle East and Israel in particular
• The successes and failures of Israel’s public diplomacy

A question and answer period will follow each lecture.

Tickets for each lecture are priced separately at $8, $7 for senior citizens (over 65 with I.D.) and $5 for matriculated non-Hofstra students (with I.D.). Members of the Hofstra community receive one free ticket upon presentation of a current HofstraCard. The lectures are supported in part by the Dorothy and Elmer Kirsch Endowment for the Hofstra Cultural Center. Ticket proceeds will benefit the Judaic Studies Scholarship Fund at Hofstra University.