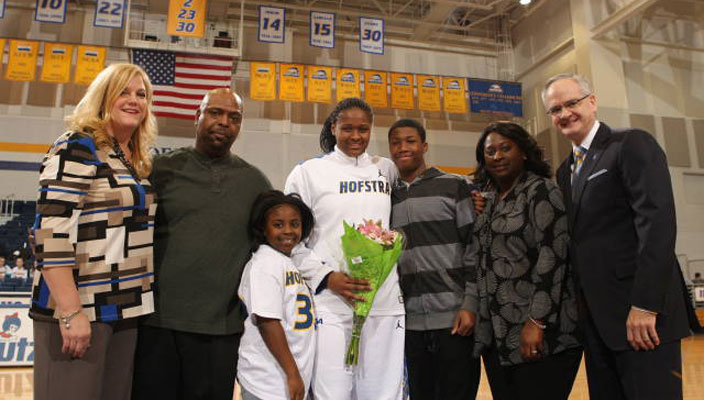 In a surprise pregame ceremony, the Hofstra University Department of Athletics retired the jersey number (#30) of senior forward Shante Evans, prior to the Pride’s regular season home finale against the Seahawks of UNCW Sunday afternoon.

Evans becomes the third Hofstra Women’s Basketball player to have her number retired following Liz Irwin (1978-1982) and Dia LaBella (1978-82), who had their numbers retired in March, 2009. Evans, a two-time (2010-12) Associated Press All-American, becomes the 26th Hofstra student-athlete to have her jersey number retired.

Evans, a native of West Chester, PA, is Hofstra’s all-time career record holder in points, with 2,082 following her 19 points against UNCW Sunday, and rebounds, with 1,314 after 19 boards on Sunday. She is now also tied for third, with teammate Candace Bond, in career games played with 124.

Evans is currently seventh on the CAA’s all-time scoring chart  She also ranks fifth in career field goals made (774) and sixth in free throws made in a career with 516. Heading into the Pride’s regular season finale on Wednesday at Northeastern,

Evans is also one of just three active players, along with Baylor’s Brittney Griner and Howard’s Saadia Doyle, who have amassed 2,000 points and 1,000 rebounds in their career. She also has the most career double-doubles among active Division I women’s players, according to STATS, LLC.

The two-time All-Met and All-ECAC selection is averaging 16.6 points and 11.5 rebounds while starting all 28 games in 2012-13. She currently leads the CAA in rebounding, ranks sixth in scoring, ninth in field goal percentage, tenth in blocked shots and 13th in steals. She tallied a season-high 33 points and tied her career-high with 23 rebounds in the Pride’s 72-67 overtime victory over George Mason on January 31. Evans has led the Pride in scoring 16 times and in rebounding 21 times this season.

As a junior, Evans averaged 19.2 points and 10.5 rebounds and was named to the A.P. All-America team, the All-CAA first team, the All-Met Division I first team and the ECAC Division I All-Star team. In 2010-11, she became Hofstra’s first A.P. All-American and was also named to All-CAA, All-Met and All-ECAC teams after averaging 18.4 points and 11 rebounds per game. As a freshman, Evans averaged 13.3 points and 9.5 rebounds per contest and was named to the All-CAA second team as well as the CAA All-Rookie team.