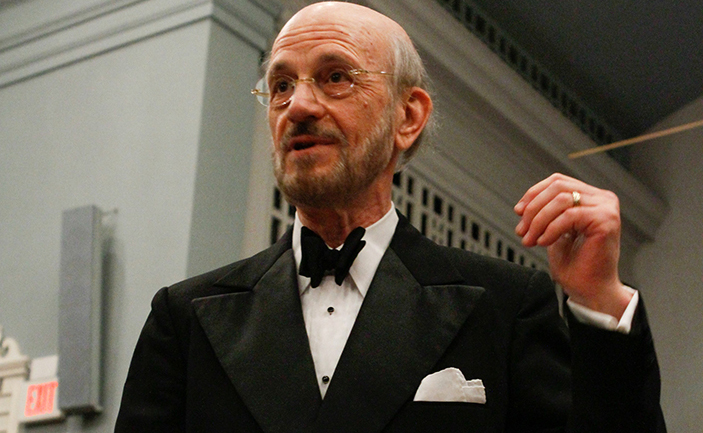 Hofstra University, Hempstead, NY … Dr. William E. Hettrick, Hofstra University professor of music , has been named the recipient of the 2013 Curt Sachs Award, the highest honor bestowed by the American Musical Instrument Society (AMIS).  Named for a great American scholar who contributed much to the field of organology, the award recognizes lifetime scholarly achievement and service to AMIS. Dr. Hettrick will be recognized at the AMIS’s annual meeting this spring in Williamsburg, VA.

Dr. Hettrick joined the Hofstra faculty in 1968. From 1994 to 1995 he was chairman of the Department of Music, and he has also served as acting chairman and associate chairman. For forty-four years he has directed the Hofstra Collegium Musicum, an organization of students, alumni, and community members dedicated to the performance of repertoire from the heritage of early music. Consisting of a chorus and several ensembles of historical instruments, the Collegium presents a concert off-campus in the fall semester and appears in Hofstra’s annual Shakespeare Festival every spring. He also directs the degree program (B.S. in Music) in music history.

Dr. Hettrick served for seven years as editor of the Journal of the American Musical Instrument Society, and as editor of the AMIS newsletter. He served as president of the AMIS for four years, has been a member  of various committees, and has delivered many papers at annual meetings, most recently on the American piano industry.  At the organization’s annual meeting (May 30–June 1, 2013), where Dr. Hettrick will receive the award, he is scheduled to present a paper:  “’Movin’ On Up’: The Great Migration of Piano Factories to Harlem and the Bronx, New York, in the Period from 1880 to 1930.” The paper is based on a walking tour of former piano factories in the Mott Haven section of the Bronx that he gave last year to AMIS members.

Dr. Hettrick has been widely published in scholarly journals and encyclopedias. He has served as author and editor of a number of books, including  The “Musica instrumentalis deudsch” of Martin Agricola: A Treatise on Musical Instruments, 1529 and 1545 (Cambridge: Cambridge University Press, 1994).  He has also published several critical editions of Selected German Works by the 19-century Austrian composer and conductor Johann Herbeck  (Middleton, Wis.: A-R Editions, Inc.).

Hofstra University is a dynamic private institution of higher education where more than 11,000 full and part-time students choose from undergraduate and graduate offerings in liberal arts and sciences, business, communication, education, health and human services, honors studies, a School of Engineering and Applied Science, a School of Law and the Hofstra North Shore-LIJ School of Medicine.
###

In the News: Writing and Composition Professor Ethna Lay
In the News: Dr. Richard Himelfarb