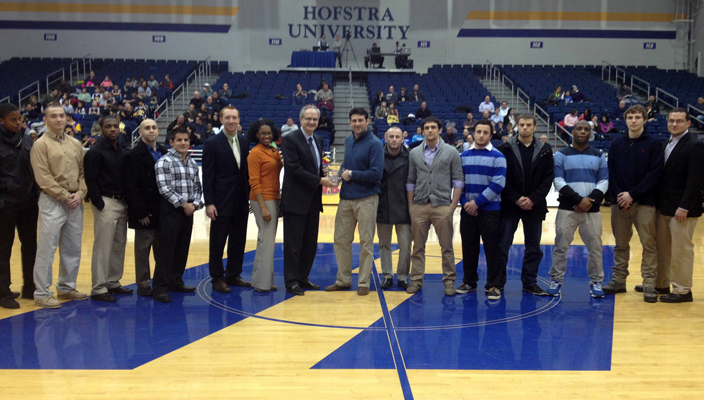 The Hofstra Wrestling team was recently awarded the Pride Cup Trophy for winning the 2011-12 Pride Cup Competition. The presentation took place during the Men’s Basketball game against George Mason University on Wednesday, February 20. Head Coach Rob Anspach accepted the trophy on behalf of his coaching staff and student-athletes, who claimed the trophy for the first time in competition history.

The Pride Cup began in 2009 and has student-athletes from each of Hofstra’s 17 Division I athletic teams compete in a variety of categories. Teams earn points not only through athletic achievements, but academic success, support of fellow student-athletes, community outreach, campus involvement, as well as career and personal development.

Last year the Wrestling team took part in six community service projects including a visit to a local elementary school and the Make-A-Wish Foundation Polar Plunge. Team members were active around campus, taking part in a Party in Pink Zumba class which raised funds for breast cancer research and development.

Academically, senior Steve Bonanno became the second Pride wrestler to be named an Academic All-American in the last two years. Student-athletes from the Wrestling team set a competition record in the support of fellow student-athletes category, and captured the 2012 CAA Championship. Six team members qualified for the NCAA tournament, with Bonanno and Justin Accordino earning All-American accolades.