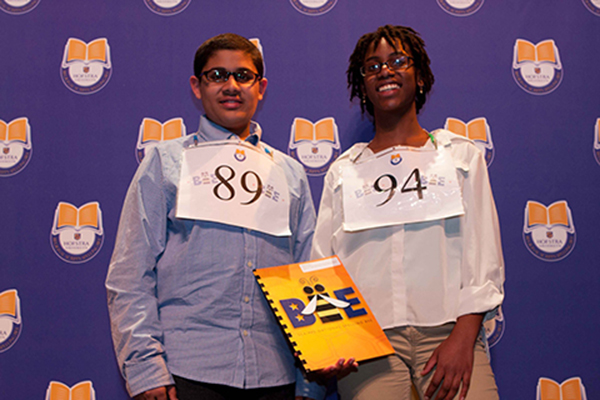 Isabelle’s winning word was “abatement.” Prior words she answered correctly were “embroider,” “decongestant,” and “dubiously.” At the onset of the competition there were 99 4th-8th grade students from schools across Nassau and Suffolk County participating in the Hofstra Long Island Regional Spelling Bee.

First runner up in the competition was Naman Shakrani from W.T. Clarke Middle School in Westbury. Some of Naman’s words in the final rounds were “flabbergast” and “adventitious.”

Today’s Bee was the second to be held at Hofstra, and Isabelle will now represent Long Island at the Scripps National Spelling Bee in Washington, D.C., later this spring.

The head judge at the Bee was Hofstra Associate Professor of Writing and Composition Studies Carole Papper. Reading the words, their definitions and languages of origin to the students was Bob Papper, Hofstra University’s Lawrence Stessin Distinguished Professor of Journalism and chair of the Department of Journalism, Media Studies, and Public Relations.

Welcoming all the competitors at the beginning of the competition was News 12 Long Island reporter Jill Wagner, who has been with the station since 2008. She has covered a wide range of breaking news and political stories, including ‘Miracle on the Hudson,’ Tropical Storm Hanna, and the final presidential debate at Hofstra University.