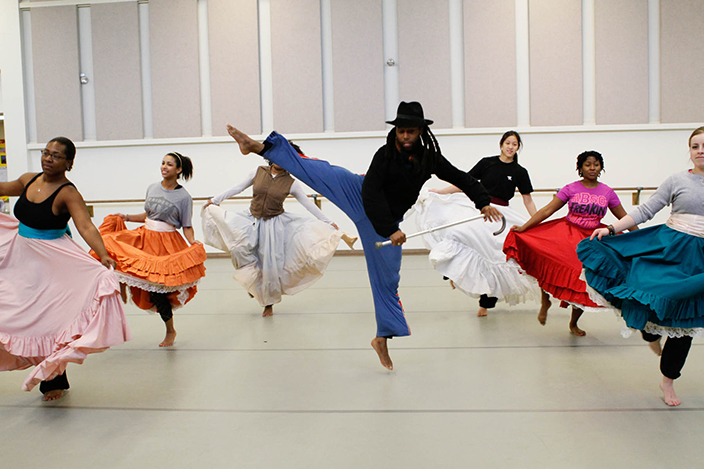 Hofstra University, Hempstead, NY (January 16, 2013)  …  “Black Spirit and the Struggle for Freedom,” a concert of music and dance that recreates seminal performances and events by black artists and historical figures, will take place on Sunday, February 17, 2013, at 3 p.m. at the John Cranford Adams Playhouse.

Hofstra student actors will guide the audience through a semi-historical narrative highlighting important milestones in African-American culture and the struggle for freedom in the United States and the world. The audience will hear re-enactments of Marian Anderson’s famous 1939 concert on the steps of the Lincoln Memorial, tenor Roland Hayes’ controversial recital debut in Germany, Billie Holiday’s courageous performance of “Strange Fruit,” and Nelson Mandela’s address to a crowd of thousands in Cape Town, South Africa, following his release from prison in February 1990. Dances from ragtime to swing to a South African boot dance will tie the concert together.

This collaboration between the Department of Music and the Department of Drama and Dance will feature performances by the Hofstra Chamber Choir, Hofstra Jazz Ensemble, Hofstra Symphony Orchestra, and Hofstra student dancers and actors. Choral ensembles from Hempstead High School and Uniondale High School will also perform.

Tickets are $15 general admission, $12 senior citizen (over 65) or matriculated non-Hofstra student with ID. Members of the Hofstra community receive one free ticket upon presentation of a current HofstraCard. For tickets and more information, including tickets for schools, call the Hofstra Box Office at (516) 463-6644, Monday through Friday, 11 a.m.-3:45 p.m.

This concert is funded by the Hofstra Cultural Center and the D’Addario Community Music Appreciation Initiative, a multi-faceted program designed to increase knowledge and appreciation for all types of music among a broad range of young people. The initiative addresses several needs at Hofstra and in the local community, including to promote music appreciation, showcase the Hofstra Music Department and to allow Hofstra’s Music Ensembles to visit and perform in local schools and inspire children.

“I’m Gonna Sing ‘til the Spirit Moves My Heart” arranged by Moses Hogan and performed by the Hofstra Chamber Singers, directed by David Fryling,  and Hempstead and Uniondale ensembles.

Soprano Diana Solomon-Glover will sing “My Country ‘tis of Thee,” in tribute to Marian Anderson.

The Hofstra Chamber Singers will sing “Come Sunday” by Duke Ellington. The Jazz Ensemble, directed by David Lalama, will join Hofstra dancers in a performance of an Ellington Swing set, choreographed by Mickey Davidson.

Baritone Steven Herring will sing selections from Hofstra Music Professor Chandler Carter’s song cycle “Shouts, faces, cities and lonely roads,” words by Lou Lipsitz.   To close the concert, all singers and ensembles will join the Hofstra Orchestra, directed by David Ramael, to perform two scenes from Professor Carter’s original opera No Easy Walk to Freedom, based on the life of Nelson Mandela.
Hofstra University is a dynamic private institution of higher education where more than 11,000 full and part-time students choose from undergraduate and graduate offerings in liberal arts and sciences, business, engineering, applied science, communication, education, health sciences and human services, honors studies, the Maurice A. Deane School of Law and the Hofstra North Shore-LIJ School of Medicine.

More About the Guest Artists:

Mickey Davidson is primary choreographer for her own company, Mickey D & Friends, a group of dancers and musicians that explores and performs the interlocking relationship between music and dance. She has collaborated with playwright Ntozake Shange, choreographing her groundbreaking play For Colored Girls Who Have Considered Suicide When the Rainbow Is Enuf.

For 17 years, Ms. Davidson was the artist-in-residence at Wesleyan University in Connecticut, teaching jazz and tap. She has taught dance seminars and workshops at Princeton University, Kenyon College and Lincoln Center. In 1999 she was awarded the Trailblazer Award from International Women in Jazz.

Ms. Davidson is living, moving history. Through her “hands-on” teaching of basic movement and polyrhythms, she traces the journey Americans took from Africa, through the Middle Passage, to the slave dances and songs of the Southern plantations. She explores and demonstrates how these same rhythmic and movement strands reappear in American dances such as the Lindy Hop, swing and contemporary hip-hop. Between dance phrases, Ms. Davidson weaves in stories about Harlem in the 1920s, Count Basie, and how swing has its roots not only in the Charleston, but in the cakewalk slaves performed for their masters. Her dance is not a celebration of a particular people, but rather an examination of the migration of physical expression through time, space and cultures.

Ms. Davidson has an international commitment to telling America’s rich and often painful musical story. She is much more than a dance teacher or historian. She is an American griot, continuing the tradition of passing on stories – told through rhythm, song and movement – from one generation to the next.

***
Baritone Steven Herring, a native of Washington, DC, is a graduate of The Juilliard School and the Duke Ellington School of The Arts.  Steven’s repertoire spans many musical genres. On the operatic stage, he has performed the roles of Germont in Verdi’s La Traviata, the title role in Verdi’s Rigoletto, Sharpless in Puccini’s Madame Butterfly, to name a few. Very convincing in “crossover” repertoire, audiences have enjoyed Steven Herring’s performances of Agwe in Once on This Island, Wandering Son in Bubblin’ Brown Sugar, Obatala in God’s Trombones, and Doc in West Side Story. Steven sings for the nationally syndicated radio segment “Hip Hopera.” a recording of hard core rap songs in an operatic style. Currently, Mr. Herring is the love interest in Alicia Hall Moran’s the motown project, a unique chamber ensemble that engineers the alchemy of Opera and Motown.

***
Robert Mack has received glorious reviews for his powerful yet sweet lyric tenor voice, throughout the United States and Europe.  He has performed principal roles with noted opera companies, such as New York City Opera, Houston Grand Opera, Opera Carolina, Nashville Opera, The Paris Bastille, and The Teatro Real in Spain, and he took part in the world famous Metropolitan Opera performance of La Fanciulla del West and The Nose. He toured with Three Mo’ Tenors and recorded the role of Sportin’ Life in Porgy and Bess with Nashville Symphony, and Wade in the Water with KSW Music, and can be heard as Andy on the Paragon Ragtime recording of Treemonisha, conducted by Rick Benjamin.  He co-founded and is the general manager of Opera Noire of New York.

***
Diana Solomon-Glover is a versatile singer and performer who has appeared in opera, concert, oratorio, recital, musical theater, cabaret and television throughout the United States, Central America, Europe and Canada.  Last season, Ms. Solomon-Glover was the featured performer at the Fifth Annual Innocence Project Gala.  She also sang the title role in Nkeiru Okoye’s Harriet Tubman: When I Crossed That Line to Freedom in Hofstra’s 2012 Black History Month concert, “A Ride on the Underground Railroad.” Ms. Solomon-Glover recently returned from a cultural exchange in Cuba where she performed at The Gran Teatro de La Habana and the Basilica Menor de San Francisco de Asis alongside Cuban icon Digna Guerra.  She appeared with the Houston Ebony Opera Guild and was the soprano soloist for Mendelssohn’s Elijah with conductor Stephen Black.  In 2009 she sang the Angel in John Harbison’s The Flight Into Egypt with the New Amsterdam Singers.  Ms. Solomon-Glover was also a featured actor and singer in the National Public Radio broadcast of Then I’ll Be Free to Travel Home, an award-winning, radio docu-drama.

Ms. Solomon-Glover made her debut as a playwright and producer in 2001 when her multimedia musical theater piece Blackwater was performed at The Riverside Theatre in New York City.
###