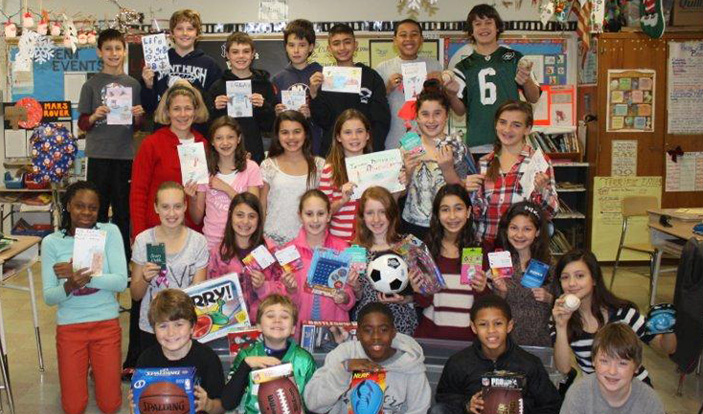 * May 21, 2013, Update to this December 13, 2012, story: Monica Zenyuh has been named a recipient of the 2013 IABC Student Achievement Award for her Adopt-A-School effort. She will receive the award at the IABC June 5, 2013, luncheon at Crest Hollow Country Club. More info at: http://www.iabc-li.com/events/43/annual-achievement-awards-luncheon.aspx

Monica Zenyuh has her hands full. By day, she’s a middle school teacher at the Harborfields Central School District. Past school hours she’s not only a mom to two children, ages 5 and 7, but also a doctoral student and adjunct professor in Hofstra University’s Learning and Teaching Program. In recent weeks, Monica has added even more heft to her schedule. In the shadow of Hurricane Sandy, she started an “Adopt-A-School” program that has crossed state lines to benefit 18 schools and three school districts on Long Island, Queens and Staten Island.

The widespread interest in her “Adopt-A-School” program has taken even Monica by surprise. The Northport resident says that after Sandy hit, she wrote a long email to friends telling them what had happened on Long Island. “I grew up in Floral Park,” she says, “I played at the East Rockaway gym and on the Oceanside soccer field. My friends and I hung out in Long Beach. So I just wrote to them and posted on Facebook about what the storm was like and how hard it hit in many of the places that were a part of my childhood. People began responding like crazy wanting to know what they could do to help – food drives, clothing drives. I have friends who are principals, and they wanted their schools to get involved.”

Rather than just send out names and numbers of charities and organizations working on the relief effort, Monica wanted to stay involved to assure the people and schools who had responded that their efforts and collections would make a difference . “I began reaching out to school superintendents on the South Shore, telling them that I knew of schools that would be interested in ‘adopting’ them. Well, I got emails like crazy. I became the liaison – schools and school districts were telling me what they need, and I put them in touch with other schools that wanted to help.”

Monica added another dimension to her burgeoning network of volunteers. Students are asked to write letters to the schools or people they are helping to make a personal connection. “For a lot of kids, their parents shop or give money for the relief effort. The children aren’t investing anything of themselves. This way they make a personal connection. I provide information about the school they are helping – its colors, mascot, and other facts that help them know the school a little better.”

Monica says that her “Adopt-A-School” program currently includes 60-70 helper schools and classes ranging from Pre-K through high school in New York, Connecticut, Massachusetts, Rhode Island and Maine. There are another 15 groups, such as Brownie Troops, a New England field hockey team and a Lucille Roberts gym franchise that are participating. Hofstra undergraduate and graduate students involved with the Association of Supervision Curriculum Development have also been participating. Monica says that the focus of the program has recently shifted to make the holidays happier for schools and families badly impacted by the superstorm. “Right now we’re doing a lot of toy drives and raising money for gift cards. What I’m hearing from social workers is that families are only now getting over the shock of the hurricane. They are feeling overwhelmed and depressed that they don’t have extra money for gifts.”

Juggling her philanthropic work and family life with teaching and doctoral studies is no easy task, but Monica clearly finds being both a student and instructor at Hofstra nurturing and inspiring. “I actually got my master’s here in MST [Math-Science-Technology, now called STEM]. I also adjunct here and will teach a course in the spring with Eileen Simons [adjunct assistant professor of Learning and Teaching]. I love teaching on the college level, and to do so full time you need a doctorate.  The Learning and Teaching Program just sounded perfect for me. This is my second year in the program, and my cohort is wonderful. We come from different areas, and we all get along. It’s a very collegial atmosphere.”