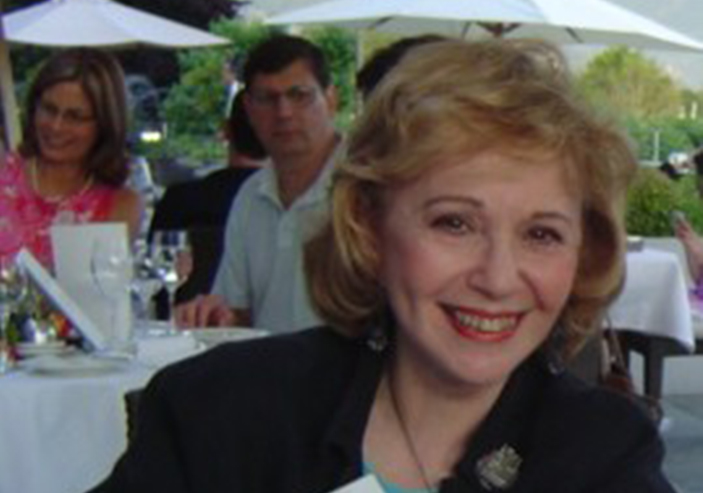 Dr. Prigozy can trace her affinity to the author back to her own college years. She attended Brooklyn College and did her graduate work at CUNY. “In college I took a course in American literature,” she said. “Fitzgerald was not well known in those days, and there happened to be a short story [“Winter Dreams”] in one of the books that really fascinated me. When I was doing my Ph.D., there really hadn’t been any major research on Fitzgerald and his short stories.” As part of her doctoral research, Dr. Prigozy commuted regularly to Princeton University where Fitzgerald’s papers were housed.

When asked why she is so drawn to Fitzgerald, she doesn’t hesitate: “The language. His work is so beautifully written. There are passages that make you stop, and you feel you have to read them over again. And then there are the subjects – the contrast between wealth and poverty and also his appreciation of the struggles of young people.”

Dr. Prigozy first taught as an adjunct at Lehman College before coming to Hofstra. “In those days I felt – as did many – that in order to get tenure you had to be published. The first work I published was on the relationship between Fitzgerald and Ernest Hemingway – a subject I found fascinating. I sent it off, not to a scholarly publication but to a popular magazine called Commonweal. They took it immediately, and it’s still quoted today. That was the first time anyone had written about the relationship between the two writers. I think that’s what set me off, and I became known as a Fitzgerald scholar.”

There were two notable relationships formed at Hofstra that are very close to Dr. Prigozy’s heart. The most important was meeting and marrying fellow professor and Mark Twain scholar Stanley Brodwin, who passed away in 1995. The second was her founding of the F. Scott Fitzgerald Society in 1992 with Jackson Bryer of the University of Maryland and Alan Margolies of CUNY. “The three of us were talking at an American Literature Association conference. There had been a lot of societies formed to recognize writers. It had been going on for 10 years or so. There was a Hemingway Society, a Mark Twain Society, but nothing for Fitzgerald. So the three of us decided we should start a Fitzgerald Society. I remember I ran into Jim Shuart, Hofstra’s president at the time, and Dick Block, who was vice president, and asked them if Hofstra could start the Fitzgerald Society. They said, ‘Sure, go ahead!’ And that’s just how it started.”

Every other year since its inception, the Fitzgerald Society has hosted major conferences, alternating locations between the U.S. and abroad. “The last one was in Lyon, France, and we’ve done them in Paris, London, Switzerland, St. Paul [Fitzgerald’s birthplace]. The next one will be in Montgomery, Alabama – where Zelda Fitzgerald lived.”

The Great Gatsby has been back in the news recently because of a new 3-D film starring Leonardo DiCaprio, scheduled for release late in 2012. Though Dr. Prigozy has been called by the filmmakers with questions about the novel, she can’t help but be skeptical about the movie’s chances for success. “I’ve come to the conclusion and would agree with a lot of other scholars that it’s a book that really can’t be easily made into a film. The essence of the book is the writing. They are probably focusing on the parties and exteriors. If you can’t get into the characters, you are going to have a hard time making a good adaptation of the novel.”

However, Dr. Prigozy is not surprised that the novel continues to find new admirers. Given America’s current troubled economy, Gatsby’s themes are more relevant than ever. “One of the most powerful elements of the book is that it’s so reflective of our society – the American dream, the struggle for success. The whole idea of looking for success and feeling that, as Americans, it’s out there for us. Now when we’ve been going through a recession, I have seen more questions and references to Gatsby than I have ever seen before.

“Gatsby is set at a time, 1925, in the Jazz Age. Fitzgerald enjoyed immense popularity, and then he became a victim of the Great Depression. He was living at the top of the world and then there was the failure, ‘The Crack-Up,’ as he describes it, in the 1930s. It is very interesting to me how so much of our history is reflected in The Great Gatsby and in Fitzgerald’s own story. Their popularity recurs as we [Americans] have more problems and economic struggles.”

Dr. Prigozy’s research on Fitzgerald has also prompted her to consider writing a book that will reexamine his tempestuous relationship with Zelda Fitzgerald. “Her influence on Fitzgerald was not positive as represented in the books written on her during the 1970s through the 1990s. He supported her throughout her life, and she made his life extremely difficult always.”

Perhaps it’s not surprising that Dr. Prigozy is drawn to other cultural icons whose successful careers have been marred by tragedy. In 2006 she published The Life of Dick Haymes: No More Little White Lies. At one time, Haymes, a singer and actor, had been as popular as Frank Sinatra and Perry Como, but he lost the support of his fans because of drinking, financial problems, multiple failed marriages and Hollywood gossip. Dr. Prigozy says, “I feel that if you listen to Dick Haymes today, he was just one of the most wonderful singers. But his life was a tragedy – he had one of the best voices and at one time was more popular than Sinatra. It’s a tragic American story – kind of Gatsby-esque.”

For the last few years, Dr. Prigozy has been working on a book about another singer/ actor who experienced a similar surge in popularity and then downfall – Gordon MacRae, best known for starring in the movie musicals Oklahoma! and Carousel. “I loved his voice,” she says. “He starred in these movies and then he became a forgotten man. His drinking really affected his career. I feel he, too, is a kind of neglected figure.”

Fitzgerald once wrote, “Show me a hero and I’ll write you a tragedy.” Dr. Prigozy is considering writing biographies on Frank Sinatra and Hugh Jackman, but she has found the rewards are greater in bringing attention to cultural icons who were cast aside, like Haymes and MacRae, as she did for Fitzgerald. “I have the feeling it’s nice to do something for somebody people don’t appreciate.”

“Working with Ruth Prigozy is an education in literary history,” says Natalie Datlof, executive director of the Hofstra Cultural Center. “Her knowledge is endless, her enthusiasm boundless and her spirit of inclusion allows you entrance into the magical world of the authors, playwrights, and filmmakers under study.”

No other Hofstra faculty member has directed or co-directed as many conferences and symposia as Ruth Prigozy. “I just love working on the conferences,” Dr. Prigozy says. “I think Hofstra has an amazing reputation for presenting them, and they are a tremendous contribution to not just local culture, but our country’s culture.”

Being a key figure in the development of these conferences is no easy task. Some of these events take years to pull together. They involve inviting key figures on the specific subjects, scheduling panel discussions, special lectures, dinners, and musical or theatrical presentations.

“I like working on them,” says Dr. Prigozy, “because they broaden my understanding of the subject and of the cultural arena. They have allowed me to meet other people in the academic world, and that has really been fascinating.”

Of the seven major events she’s worked on, Dr. Prigozy says the 1992 F. Scott Fitzgerald Conference is the one she remembers most fondly. “Of the people we were able to get, many have since passed on, like Budd Schulberg and Ring Lardner, Jr., whose father was Fitzgerald’s best friend. Fitzgerald’s granddaughters and people he knew from St. Paul were also there.”