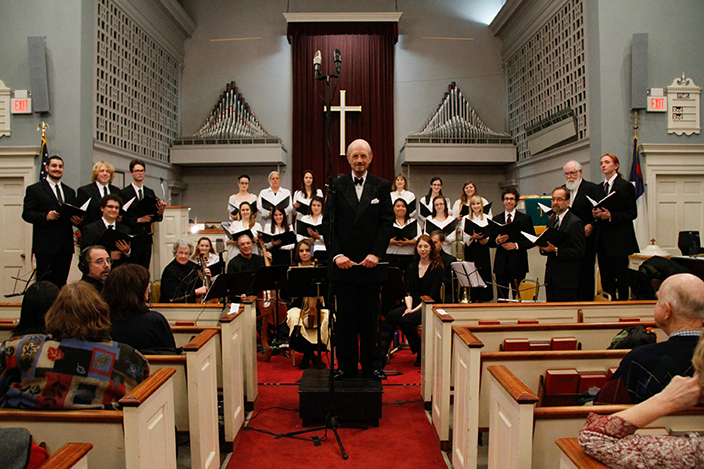 Hofstra University, Hempstead, NY… The Hofstra Collegium Musicum will present a concert, “Old Wine in New Bottles: The Songs Live On,” at the First Presbyterian Church of Mineola at 8 p.m. on Saturday, November 17, 2012. Directed by Dr. William E. Hettrick, Hofstra University Professor of Music, this organization is devoted to the performance of little-known music of the past, customarily called “Early Music.” Comprising a chorus and ensembles of viols, recorders, krumhorns, sackbuts, cornetto, Renaissance flute and drum, medieval instruments, and modern orchestral instruments, the Hofstra Collegium Musicum is made up largely of current Hofstra students, although several alumni and members of the faculty and community also take part. The Hofstra Collegium Musicum has presented concerts of early music continuously every semester since it was founded by Dr. Hettrick in 1969.

First Presbyterian Church is located at the corner of First and Main Streets in Mineola, just east of Mineola Boulevard and two streets north of the LIRR tracks. Free parking is available in a garage on First Street across from the church. Tickets are $10, $8 for seniors over 65 and non-Hofstra students with ID. Members of the Hofstra community receive one free ticket upon presentation of a current HofstraCard. Tickets may be obtained at the Hofstra Box Office in the John Cranford Adams Playhouse or by calling (516) 463-6644. Tickets will also be available at the door on the evening of the concert.

The musical program will present famous historical melodies and whole pieces, first in their original forms and then in subsequent arrangements. For example, there will be a performance of Psalm 113 set to the Gregorian-chant “Tonus peregrinus,” followed by two later pieces that make use of the same melody: Johann Sebastian Bach’s haunting “Suscepit Israel” from his Magnificat and Antonio Salieri’s powerful “De profundis.” The Collegium Musicum will end the first half of the concert with “Je suis desheritée,” a polyphonic chanson by Pierre Cadéac, followed by the Kyrie and Agnus Dei sections of the Mass of the same name (making use of the chanson model in various ways) by Nicolas Gombert.

The second half of the program will begin the cantata “In dulci jubilo” by Dietrich Buxtehude, followed by a Divertimento from the 18th century (formerly attributed to Joseph Haydn) for woodwinds and serpent, on which Johannes Brahms modeled his famous orchestral Variations on a Theme by Haydn. The concert ends with Festgesang, a cantata composed by Felix Mendelssohn to mark the 400th anniversary of Johannes Gutenberg’s invention of printing with movable type. Scored originally for men’s chorus and brass band for outdoor performance, it was first conducted by the composer in 1840 on the marketplace in Leipzig. Dr. Hettrick will present a new arrangement of this for mixed chorus and wind ensemble. The second movement of Mendelssohn’s composition presents a melody whose later adaption as a Christmas carol will be known to all.