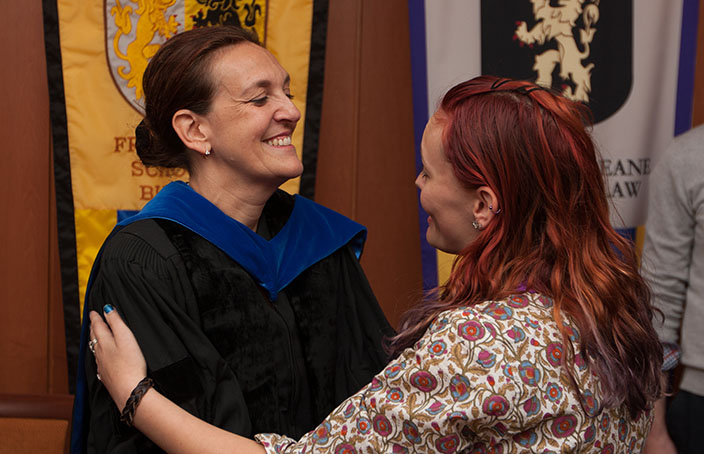 Hofstra University, Hempstead, NY … A ceremony will be held on October 22, 2012, from 3-5 p.m. to celebrate the installation of Dr. Francesca Cassio as Hofstra University’s Sardarni Harbans Kaur Chair in Sikh Musicology. This academic chair is the first of its kind in the United States.

Academic chairs are among the highest honors bestowed upon members of the faculty by the University and are regarded with great esteem throughout the academic world.

The Sardarni Harbans Kaur Chair in Sikh Musicology was established by Dr. Hakam Singh in memory of his wife. It facilitates the intellectual pursuit of music’s longstanding role in the Sikh tradition. A renowned chemist and professor with nine U.S. patents to his name, Dr. Hakam Singh is also an intellectual luminary in the international Sikh community. His academic contributions to Sikhism include numerous articles as well as books on Guru Tegh Bahadur as an apostle of human rights and a study on the mystic Indian poet Kabir. Dr. Hakam Singh and his wife of 57 years, Harbans Kaur, shared an intellectual and devout appreciation for the hymns of the Sikh faith. “There are about 6,000 hymns or shabads in the Sikh scripture and each shabad is preceded by instructions as to what raga and musical measure or taal it should be sung in,” shares Dr. Singh. Inspired by Sardarni Harbans Kaur’s lifelong appreciation for Sikh music, Dr. Singh established the Hofstra University Chair in Sikh Musicology in her name in 2008.

Dr. Francesca Cassio, associate professor of music at Hofstra University, is one of few Westerners performing and teaching the traditional repertoire of the Sikh Gurūs in India, Europe and the United States. She has lectured and performed in India, America, and Europe. Dr. Cassio earned a Ph.D. in ethnomusicology from Università La Sapienza di Roma (Italy), in affiliation with Benares Hindu University (India), under the tutorship of Professor Giovanni Giuriati and Professor Ritwik Sanyal. In 2008 she received the prestigious Orientation Grant from the Indian Council for Cultural Relations (ICCR) for a contribution on the influence of dhrupad and Gurbānī kīrtan in the music of the Rabindranath Tagore. Prior to joining the Hofstra faculty, she served as a visiting professor in musicology at Visva Bharati University in Shantiniketan, India; lecturer of ethnomusicology at the University of Trento, Italy; lecturer of anthropology of music at the Conservatory of Adria, Italy; and lecturer of ethnomusicology and Indian music at the Vicenza Conservatory of Music, Italy. Since 1991, Dr. Cassio has conducted extensive research in India, where she lived and has been professionally trained in classical vocal music and in the Sikh repertoire, according to the Gurū-Shishya Parampara (“teacher-student”) tradition. Dr. Cassio is a disciple of legendary masters of the 20th century: Padma Bhushan Ustad Rahim Fahimuddin Khan Dagar, Padma Bhushan Vidushi Girija Devi, and the Hazoori Ragi Bhai Gurcharan Singh. Dr. Cassio also received extensive training in vocal and percussion tradition by Bhai Baldeep Singh, the 13th generation exponent of Gurbānī kīrtanyas. Dr. Cassio is the author of a book on dhrupad (a medieval genre of Indian classical music). In more than 20 years of research, she has worked extensively and written about Indian music (Gurbānī sangīt, dhrupad, Rabindra sangīt, thumrī, semi-classical, folk and devotional repertoires), the yoga of sound, music therapy, gender studies, intercultural education, ethnomusicology and music pedagogy.

Hofstra is also one of a few universities to have an academic chair and program in Sikh Studies. The Sardarni Kuljit Bindra Chair in Sikh Studies is endowed by Mr. Ishar Singh Bindra and family in honor of Mr. Bindra’s wife and family matriarch, Sardarni Kuljit Kaur Bindra. The chair was established to promote the academic study of Sikh religion, culture and history.