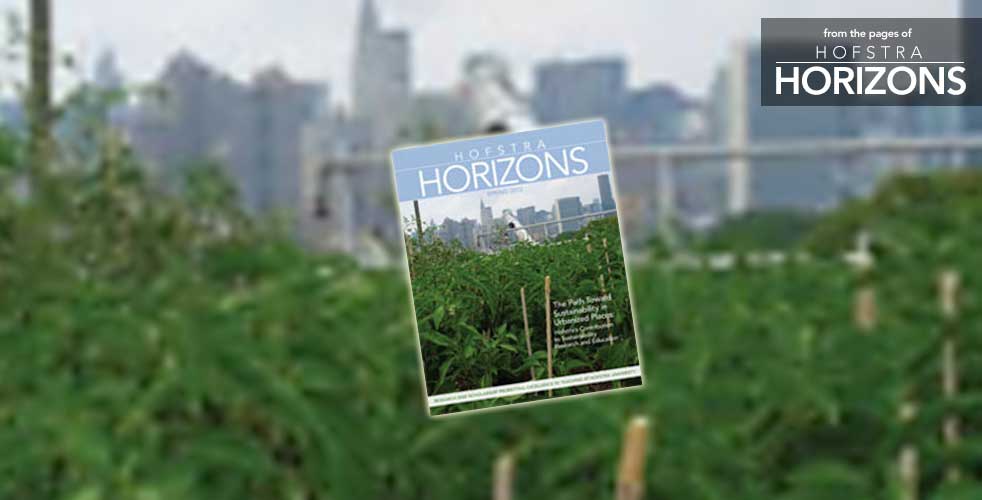 In Urbanized Places: Hofstra’s Contribution to Sustainability Research and Education

As Hofstra’s new director of sustainability studies, I am often asked how I got interested in sustainability and the environment. I grew up in a small town as part of an outdoorsy family in rural Wisconsin. By 1989, I had earned my undergraduate and master’s degrees in geology and my Ph.D. in geography. But it was in the early 1980s when I had an experience that changed my career forever. 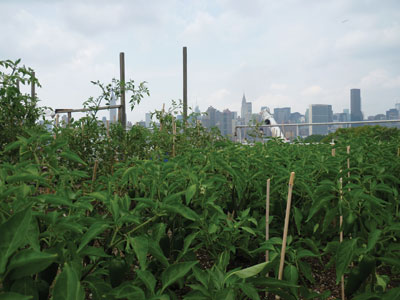 I was working for a mineral exploration company, and it was my responsibility to collect samples from small streams in the Midwest to determine if there was any chance of finding valuable gemstones. I had to try to find sediments in streambeds that represented the surrounding watersheds. The work was enjoyable, and I loved being outside collecting samples and recording data.

One day, when I was trying to gather sediments from the stream, I found only a thick layer of muck. The stream was filled with feet of decaying cow manure. It was impossible to find anything natural at all in the stream, or in the stream valley for that matter.

When I looked around me, it seemed entirely natural. It was a lovely agricultural landscape with cows, barns, cornfields, and farmhouses. How could such a place be so disturbed and altered?

At that moment, I started to put it all together. What I had heretofore seen as a natural geologic setting was a heavily altered landscape that changed drastically within the last few decades as a result of intensive agricultural activity. I saw a heavily eroded and chemically altered place that was far from natural. From that point forward, the focus of my career has been the measurement and description of human alteration of the planet.

I continue to do pure geologic research, particularly on karst (limestone terrains). I have published articles on caves, sinkholes, and environmental issues in karst regions (for example, Brinkmann and Parise, 2010; Brinkmann, Parise, and Dye, 2008; Seale and others, 2007; and Brinkmann and Reeder, 1995). I have a book on sinkhole science and policy that will be published next year by the University of Florida Press. However, my main research interests are in the area of environmental sustainability.

Much of this work was conducted with my good friend Graham Tobin, who is an associate vice provost at the University of South Florida. Our work demonstrated that street sediment is highly variable and that while some of it is polluted, sediment that is collected in street sweepers can be recycled and reused in some instances. Our work also demonstrated that street sweeping management is highly variable and not coordinated or managed the same way that storm water is managed in cities.

This is a lost opportunity because street sweeping can be a valuable tool in storm water management. Plus, in most instances, street sweeping waste is treated as either a hazardous waste or a resource. The reality is that it is both of these things and thus is often mishandled.

This work has taught me that there is value in developing environmental benchmarking and management systems, and I started to study a number of these systems and how they apply to environmental management. Some of them, such as the benchmarking system developed by the Florida Green Building Coalition (FGBC), are highly effective. The FGBC not only evaluates the greenness of buildings, but also provides a benchmarking system for local governments of any size.

The major tenet of sustainability is preserving resources today so that they are available for future generations. These ideas are different from more traditional approaches to environmental management that emerged in the 1960s. Then we were concerned solely with preserving the environment and limiting pollution.

As many people in the environmental community know, we have not had any significant new national legislation on environmental issues in many years (Brinkmann and Garren, 2011). So most of the management tools the federal government has to work with in this new era are in the form of the Clean Air Act, the Clean Water Act, and the Endangered Species Act. This is problematic not only for sustainability management but also because new environmental issues have emerged since these bills were passed. For example, we have hundreds of new unregulated chemicals that are emitted each year, and we have no serious federal legislation on issues of global climate change.

What our research has demonstrated is that most of the important and innovative environmental policy developments have occurred at the local level, within industries, and within institutions (Upadhyay and Brinkmann, 2010). For example, The Mayors Climate Agreement, which was developed by the U.S. Council of Mayors, commits signatory cities to abide by Kyoto Protocol climate agreements. To date, 1,055 mayors have signed the agreement. These mayors represent approximately 30 percent of the population of the United States.

Not only are mayors taking action, but industry is also a major player in sustainability. Most major companies have developed sustainability plans that encompass everything from lighting and energy consumption to workers’ rights and product manufacturing.

Universities, schools, nonprofits and other organizations have also developed individual unique benchmarking systems that focus on all aspects of organizational behavior in order to improve the environmental sustainability of their organizations. Unfortunately, many of these efforts are not coordinated at the national level, and it is difficult to assess their effectiveness. Nevertheless, there is a tremendous amount of sustainability benchmarking taking place throughout the United States, even in the absence of federal leadership on sustainability issues.

Over the years, many of my students have become involved in my research in a number of different ways. Most recently, they have worked with community organizations to develop sustainability plans and projects. Some have conducted greenhouse gas inventories, some have developed plans for individual programs such as green streets programs or green jobs initiatives, and others have conducted assessments as to community redevelopment plans within a green framework. Much of this work was conducted at the University of South Florida where I was a professor for more than 20 years.

New York has seen a significant increase in the number of young adults who identify themselves as farmers. Much of that growth is because the number of organic farms, communitysponsored agriculture, and community gardens increased all over the region. Plus, farmers markets that feature a wide variety of locally grown and made products are increasing as well.

As a testament of this growth, Hofstra hosted the second annual Long Island Small Farm Summit in April. Also, sustainable agriculture was a key component of Long Island’s recent successful economic development application that earned the region more than $100 million in state funds.

On Long Island, where we are highly divorced from our environment, we are striving to develop sustainable agricultural systems through the growth of communitysponsored agriculture, small sustainable farms, and farmers markets.

Overall, we are becoming familiar with a variety of new approaches to agriculture, and many of us are taking part in the new agricultural revolution. In work I am currently completing with Richard Vercoe, a graduate student at the University of Georgia, we are comparing the Long Island agricultural sustainability efforts with those underway in the Chiloé region in southern Chile. This is an area of the world that is identified by the United Nations as one of five Globally Important Agricultural Heritage Systems due to the significance of the region in the cultivation of the potato. Nearly 99 percent of all commercially grown potatoes can be traced to this region.

What we have identified in our comparative study is that the term sustainability takes on entirely different meanings depending upon the setting. On Long Island, where we are highly divorced from our environment, we are striving to develop sustainable agricultural systems through the growth of community-sponsored agriculture, small sustainable farms, and farmers markets. In contrast, sustainability in the Chiloé region is something that exists, but is difficult to maintain due to the pressures of globalization. It is important to understand that sustainability has different meanings in different contexts.

In the Chiloé region, the people live more or less in harmony with the surrounding landscape. Their pressures come from external sources seeking to develop the surrounding area to connect it to the globalized food production system that is highly out of step with the local environment.

So each culture has choices to make that will impact future generations. Does Long Island embrace sustainable agriculture and local farming, or does it remain reliant on the global food network? Does Chiloé embrace globalization to increase short-term wealth?

Regardless of the outcome, it is evident in our work that the meaning of sustainability is fluid and highly dependent on local cultures and conditions. The key is to examine locally how best to preserve resources for future generations within the context of environmental preservation, social fairness, and economic development.

I am also very interested in how to develop and measure sustainability efforts in the United States. My students and I have examined and evaluated many sustainability benchmarking tools and individual sustainability plans (Garren, Pinjari, and Brinkmann, 2011). We have discovered that there are many different uncoordinated approaches. Perhaps the most interesting approach we have found is that undertaken by the Florida Green Building Coalition.

This group benchmarks local governments of all sizes in order to improve sustainability practices. The benefit of having a local – rather than national – benchmarking system is that the local system takes into consideration unique local conditions of Florida such as hurricanes, humidity, climate, and local building materials.

The key is to examine locally how best to preserve resources for future generations within the context of environmental preservation, social fairness, and economic development.

While there are national benchmarking efforts, Florida is the clear leader in developing sound local approaches that make a significant difference in the lives of its citizens. Most of the large communities in Florida are part of the benchmarking system, and dozens of smaller local and county governments take part as well.

New York does have a statewide program called Climate Smart Communities that reaches out to local governments for benchmarking and best practice policies. The program focuses on climate change and associated greenhouse gas emissions. While not as all-encompassing as the Florida Green Building Coalition’s green local governments initiative, it does require communities to complete greenhouse gas initiatives and develop policies and strategies to reduce energy consumption and greenhouse gas emissions.

In many ways, Long Island is a leader in sustainability, particularly in the area of food production. However, more needs to be done in order to infuse sustainable practices into our daily lives and in order to assess the effectiveness of the efforts.

As Hofstra grows its multidisciplinary Sustainability Studies degree program, there is no doubt that many of our students will engage in sustainability research that helps to transform Long Island into a greener place and address many of the emerging issues.

English Prof. Awarded Grants from Fulbright and the NEH
Forensic Linguistics at Hofstra: From a Single Course to an International Institute